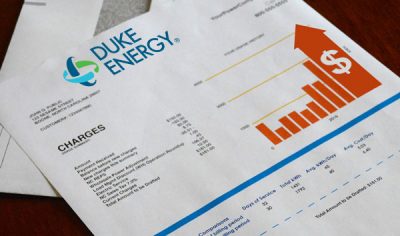 A few weeks ago, the North Carolina Utilities Commission issued its final order approving a 7.6% rate increase for the majority of residential customers of Duke Energy Carolinas, which serves about 2 million such customers in the western third of the state and is the largest of two Duke Energy subsidiaries operating in North Carolina.

Appalachian Voices, represented by the Center for Biological Diversity, intervened in that rate case, arguing against the rate increase and Duke’s requested “return on equity” because of the impact it would have on low-income households, especially during the pandemic. The rate increase took effect on June 1.

How the rate increase impacts the average residential customer

Because of three tax refund “riders” — a short-term rate reduction that gets built into the overall rate you pay per kilowatt-hour used (kWh)– most customers will actually see a 1% rate reduction in the first six months, after which rates will increase by 0.7% through 2022 as the first rider drops off, 2.2% through 2025 as the second rider drops off, and 7.6% in 2026 and beyond as the third rider ends.

More than 330,000 households, or nearly one out of five served by Duke Energy, qualified as low-income in 2018 (the most recent year for which data is available). On average, those households spent 10.5% of their income on electricity and heating costs. This is known as “household energy burden.”

In electric utility rate cases, there are a lot of different factors that are taken into consideration. In Duke’s rate case, costs related to coal ash, storm recovery, nuclear plant upgrades, a solar plant, grid investments and many other issues were negotiated. One factor that played (and always plays) a significant part in determining final rates is the “return on equity” (ROE) that Duke is allowed to earn, and as such is one of the most hotly contested parts of any rate case. (Note: ROE generally represents the sum of the percent return on debt and the percent return on shareholder investment a utility is allowed to earn).

Duke had requested a ridiculous ROE of 10.3%, and (laughably) called it a “rate mitigation” request because what they really wanted was a 10.5% ROE. The NC Public Staff — an independent arm of the NC Utilities Commission which is charged with representing the public interest in rate cases — pushed back with a more reasonable ROE recommendation of 9%.

If the commission had ruled that Duke could recover all of the costs it was requesting, the difference between a 10.3% and a 9% ROE would have been more than $130 million per year.

But despite the fact that the staff’s proposal already represented a stark compromise from what they really thought was the correct ROE (somewhere between 6.9% and 8.4%), they ultimately “settled” with Duke on an ROE of 9.6% — halfway between the two proposals. This, folks, is what is often referred to in official rate case filings as the “give and take” of ROE negotiations. Whereas ROE recommendations at the beginning are heavily based on math and modeling, the final decisions are not. They represent the outcome of negotiations between all involved parties. Unfortunately, those negotiations have profound impacts on low-income households.

If the ROE had ended up being what the NC Public Staff originally proposed (and should have held fast on since it was already a compromised proposal), there wouldn’t have been a revenue increase until year three, and the rate impacts for residential customers wouldn’t really be felt until year six.

All in all, the net total savings for all customers (residential and business) over five years would have been $199.4 million compared to what was actually approved.

So that’s what happened. That’s the impact of the “give and take” negotiations between Duke, the NC Public Staff, and legally represented business, environmental and low-income stakeholder interests. In the end, it’s not Duke Energy that will struggle. It will keep on making vast profits for its investors and paying executives millions of dollars. Organizations like Appalachian Voices or other intervening groups in rate cases won’t struggle either. We’ll keep being funded to continue to advocate in the public’s interest and for the benefit of environmental protection. It’s the ratepayers — the families and frontline workers and lower-income earners — who will continue to struggle.

We need a just and equitable energy model

Nothing in the Duke Energy rate case addresses the widespread problem of high energy burdens for North Carolina families. It just made the problem worse. If state regulators, leaders and lawmakers don’t significantly improve energy affordability, more North Carolinians will be at risk of losing vital energy services each month, which will lead to increased evictions, more negative health outcomes, and even loss of life.

That is unacceptable. We can no longer justify “giving” extra profits to Duke Energy if its business model is founded on a system that penalizes the poor who can’t afford their energy bills. We need a new energy model and regulatory system that is just, equitable, democratic, and above all, compassionate.