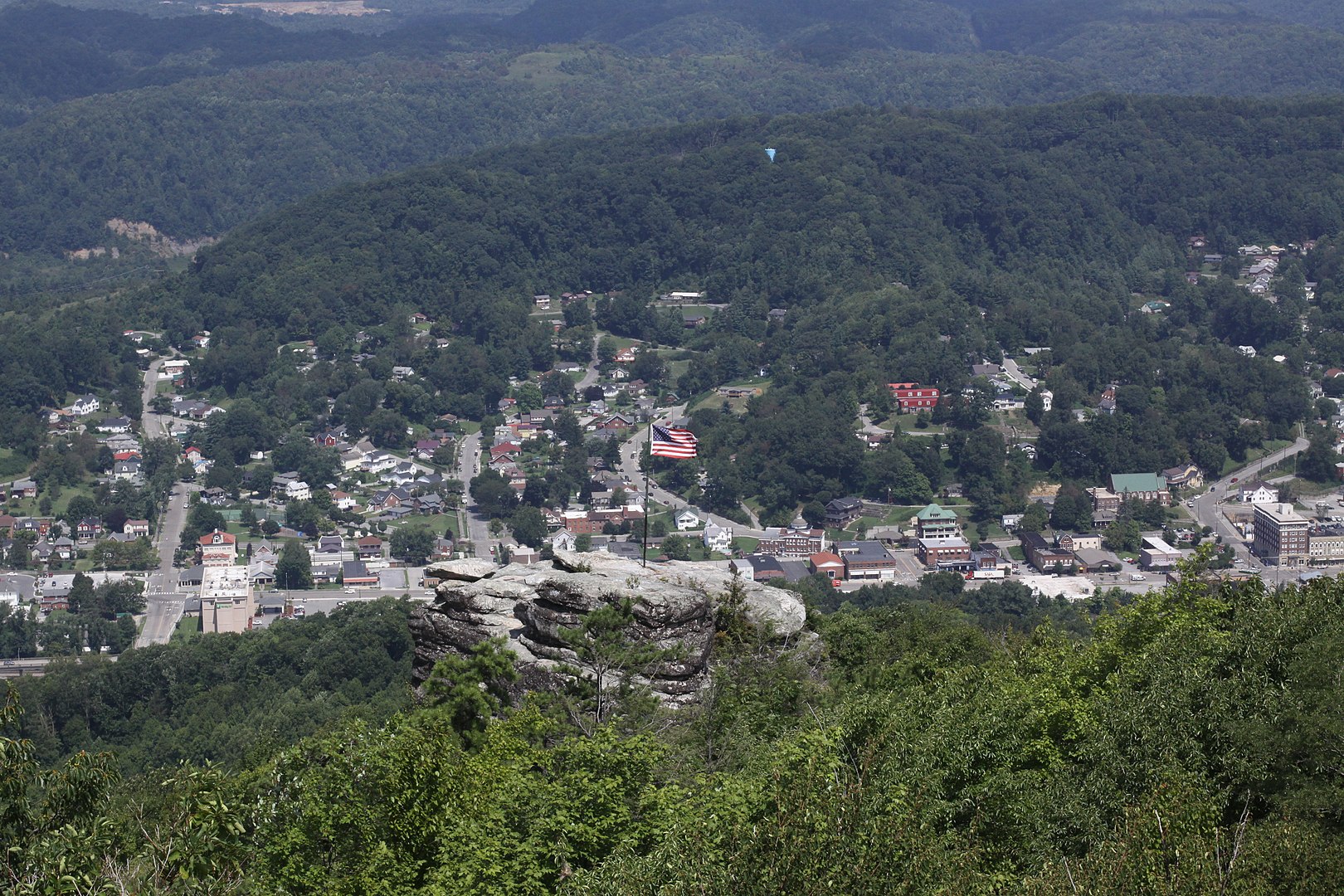 Places like the city of Norton have benefited economically from the expiring coal tax credits. The DMME’s stakeholder process is intended to hear from community members about how the state can help support the region going forward. Photo by Eli Christman (Flickr user Gamma Man)

UPDATE
The Department of Mines, Minerals, and Energy has announced its final public listening sessions for Reenergize Southwest Virginia.

RSVP for a meeting today!

On June 8, the Virginia Department of Mines, Minerals, and Energy (DMME) hosted a stakeholder listening session at Mountain Empire Community College in Big Stone Gap, Virginia, to hear from residents of Southwest Virginia about how the state can support communities that have historically relied on the coal industry.

Last fall, a legislative report to Governor Northam found negligible economic benefits from Virginia’s coal tax credits, tax incentives that were introduced to boost metallurgical coal production and the use of Virginia coal by electricity generators. In response, this spring the General Assembly eliminated the tax credits through HB 1899 & SB 1252.

The bills task DMME with convening a stakeholder process about how the commonwealth can provide economic transition support to the coalfield region, with a report due to the General Assembly on December 1. In conducting this stakeholder process, DMME is directed to collaborate with the Virginia Coalfield Economic Development Authority, Virginia Economic Development Partnership, Virginia Employment Commission, Southwest Virginia Workforce Development Board, and Council on Environmental Justice.

This ongoing public input opportunity is a crucial opportunity for Southwest Virginians to influence state investment in the region. Public participation in this process is essential to ensuring the recommendations brought back to the General Assembly address the needs of impacted communities. We encourage residents to submit comments on how the state can support economic transition in Southwest Virginia.

Members of the public can submit comments to:

Public comments are due September 30, but we recommend submitting comments by August 1 to inform the first draft of the DMME report due September 1. DMME will also soon announce the dates of the remaining two listening sessions, which will be held in Clintwood and Richlands.

The first listening session was largely attended by DMME employees and representatives of various economic development groups. DMME Director of Policy and Planning Michael Skiffington opened the meeting with a recognition of the department’s own transition; as of October 1, DMME will become the Department of Energy, shifting focus to renewable energy and related economic development opportunities.

The first public comments came from state authorities. Jonathan Belcher, executive director of the Virginia Coalfield Economic Development Authority (VCEDA), spoke about how the end of the coal tax credits signifies a significant loss to his organization’s revenue, making it more challenging to fund projects. VCEDA was created by the General Assembly in 1988 to diversify the economy of the coalfield region. In the past decade, one-third of VCEDA’s revenue came from refunded coal tax credits. Rachel Patton, assistant director of the Southwest Virginia Workforce Development Board, emphasized the need to align workforce development with economic opportunities. 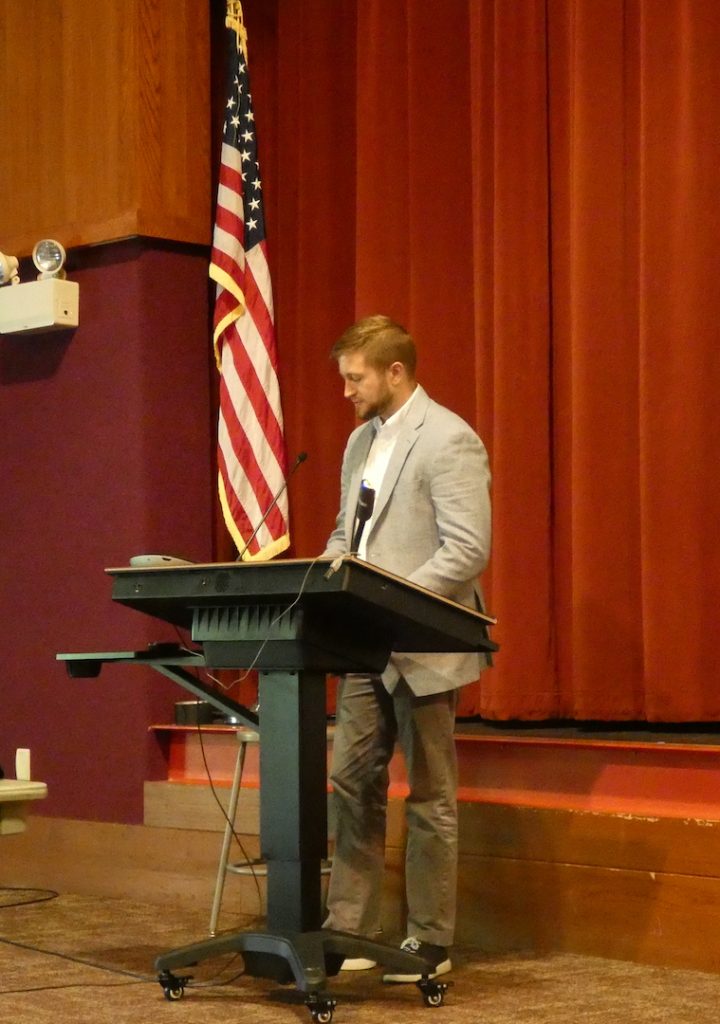 Following these remarks from state officials, DMME then turned the floor over to private citizens in the room. Will Payne, director of Invest SWVA, a public-private business and marketing campaign, talked about his organization’s “big idea projects,” such as an energy research and development lab, and closed by warning that Southwest Virginia will be left behind unless the region changes how it attracts jobs. Asher McGlothlin, president of Sunset Holler, the organization bringing the Southern Gap Amphitheater to Buchanan County, commented on the need for projects that create jobs and maximize positive outcomes for the region.

Appalachian Voices Legislative Director Chelsea Barnes stressed the importance of meaningful stakeholder engagement, with meetings publicized well in advance and the establishment of a longer-term office or advisory board to support transitioning communities. For example, Barnes suggested that the state begin helping the workers, businesses, and local governments that will be affected by the closure of the Wise County coal-fired power plant. While not slated to close until 2045, is operating at low capacity and at risk of closure within the next five years. Barnes also commented on the foundational importance of remediating unreclaimed mine lands: “Virginia should help boost jobs, improve community health and safety, and improve environmental conditions in Southwest Virginia by supplementing the federal funding for Abandoned Mine Land reclamation.”

A lobbyist for the Heart of Appalachia Tourism Authority and Spearhead Trails, Janet Settle, voiced support for the continued funding of VCEDA, and Jeff Hamilton, a court judge in the 30th Judicial District, encouraged the growth of UVA Wise and the relocation of state agencies to Southwest Virginia.

Don’t forget to make your voice heard and submit your comment by August 1!

Katie is a 2019 graduate of Dartmouth College, where she studied geography and English. She’s a fan of uphill sports, good writing, and her new home on the Holston River. As New Economy Fellow, Katie works with Appalachian Voices New Economy Program to build just and resilient rural communities and advance environmental protection.