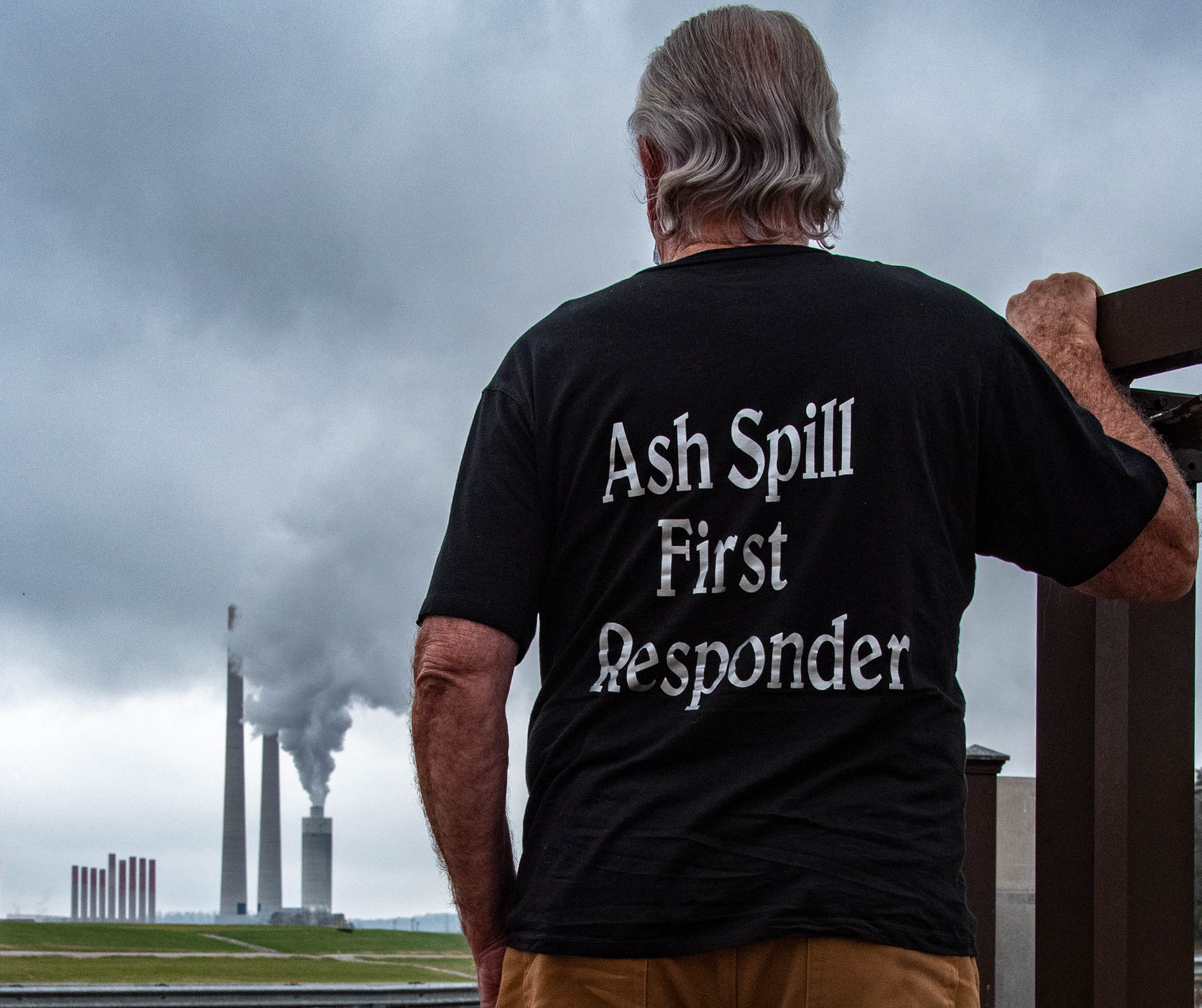 Twelve years after the largest industrial spill in U.S. history, families and advocacy groups organized a memorial service to honor the more than 900 workers who spent six years cleaning up the Kingston coal ash spill of 2008. On that fateful day exactly 12 years ago, a dike ruptured at the Kingston Fossil Plant in Tennessee, releasing more than 1 billion gallons of toxic coal ash slurry into nearby rivers and land with a force that knocked houses from their foundations. 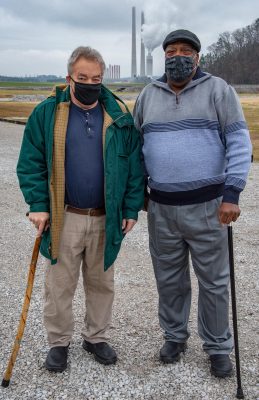 Kingston coal ash cleanup workers Ansol Clark, left, and Tommy Johnson are among those sickened by exposure to the toxic waste. Photo by John Todd Waterman 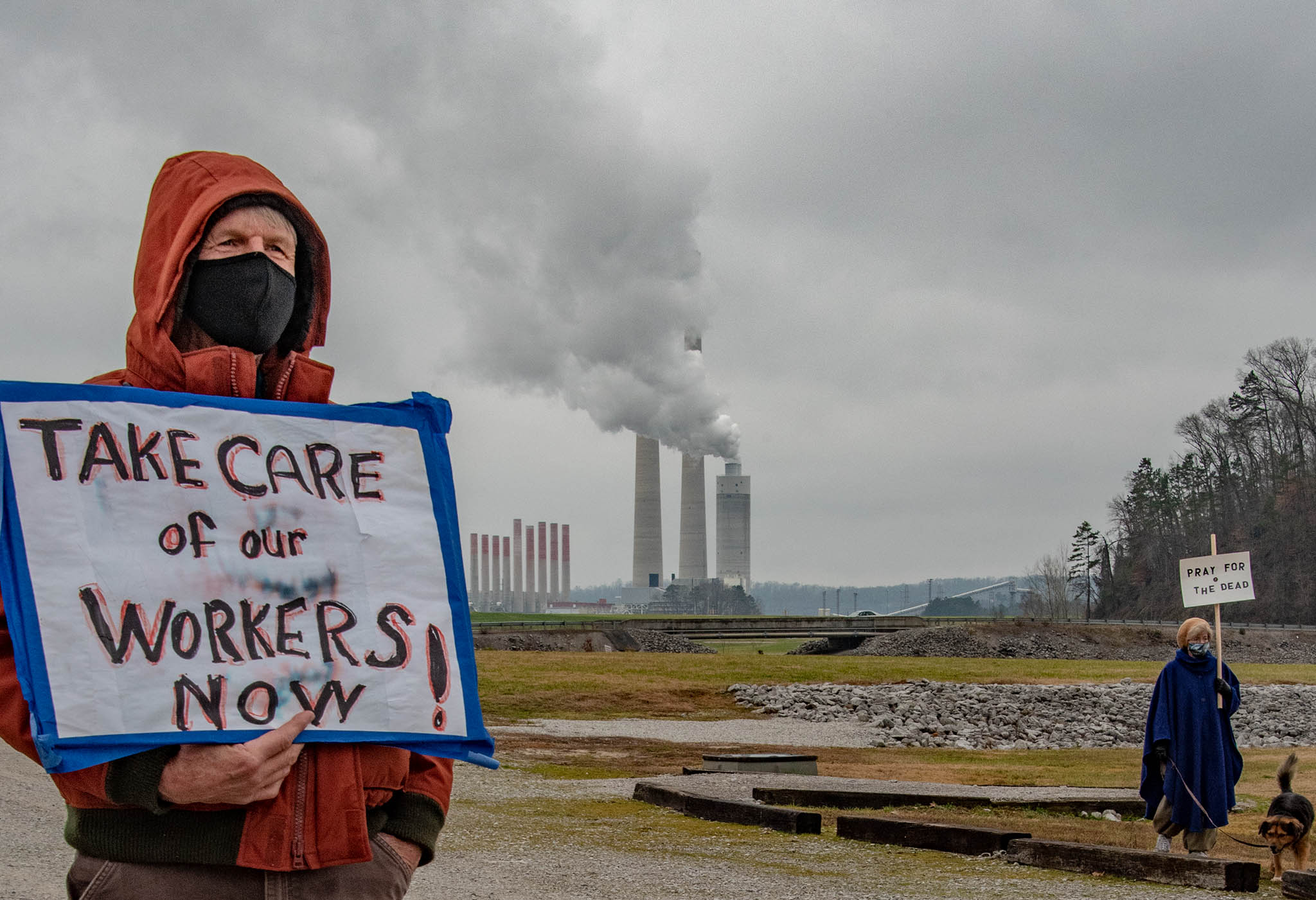 Supporters of the workers sickened during the Kingston coal ash spill hold signs at a vigil on Sunday, Dec. 19, 2020. Photo by John Todd Waterman

Well over a decade later, hundreds of workers are sick with lung diseases, blood and brain cancers and other ailments, and families report that as many as 53 workers have died from their exposure to the toxic Kingston coal ash. Workers were denied protective equipment like respirators during the cleanup and told that the ash was so safe that their lunches could be eaten on site. In the years since the cleanup, those affected have asked for support with health care coverage from the Tennessee Valley Authority, the federal utility in charge of the coal ash impoundment, and have been repeatedly denied.

The memorial on Sunday began with a 40-car caravan that arrived at a park within sight of the Kingston plant. Close to 80 people, including cleanup workers and their families, circled around a pavilion in the park, spaced widely apart and masked. Many held signs that said things like “Take Care of Our Workers Now!” and “Fight Like Hell For The Living,” a Mother Jones quote that served as the unofficial anthem of the event. The memorial closed with a release of 12 white homing doves that flew in front of the stacks of the Kingston plant. The dove release was inspired by a commemorative drawing made by cleanup worker Ansol Clark. The illustration is set to run in the Roane County News this week.

Julie Bledsoe and Janie Clark, wives of sickened clean-up workers Ron Bledsoe and Ansol Clark, kicked off the speaking session of the event with fiery demands from Julie that “Never Again!” should the atrocities and suffering at Kingston happen to another worker or family. Janie read the Emily Dickenson poem, “Hope is the thing with feathers.” Throughout the emotional event, observers could be seen embracing family members and wiping away tears.

Kingston cleanup worker Jason Williams described his requests to secure Covid-19 vaccines for Kingston first responders, which were ultimately denied by his contacts in Washington. He also shared his experiences helping other workers like Ansol Clark, who collapsed at a hearing in Anderson County, and he speculated as to whether he or his friends would be around next year in the face of their complications from coal ash exposure. Williams asked that the Kingston workers receive more gratitude for their work to clean up the disaster. He also said that storing coal ash in “super sacks,” bags designed for transporting hazardous materials, was the best way to prevent future harm in handling the toxic waste.

Tell the Tennessee Department of Environment and Conservation to require TVA to include clear, enforceable requirements for worker safety in its coal ash cleanup plans. 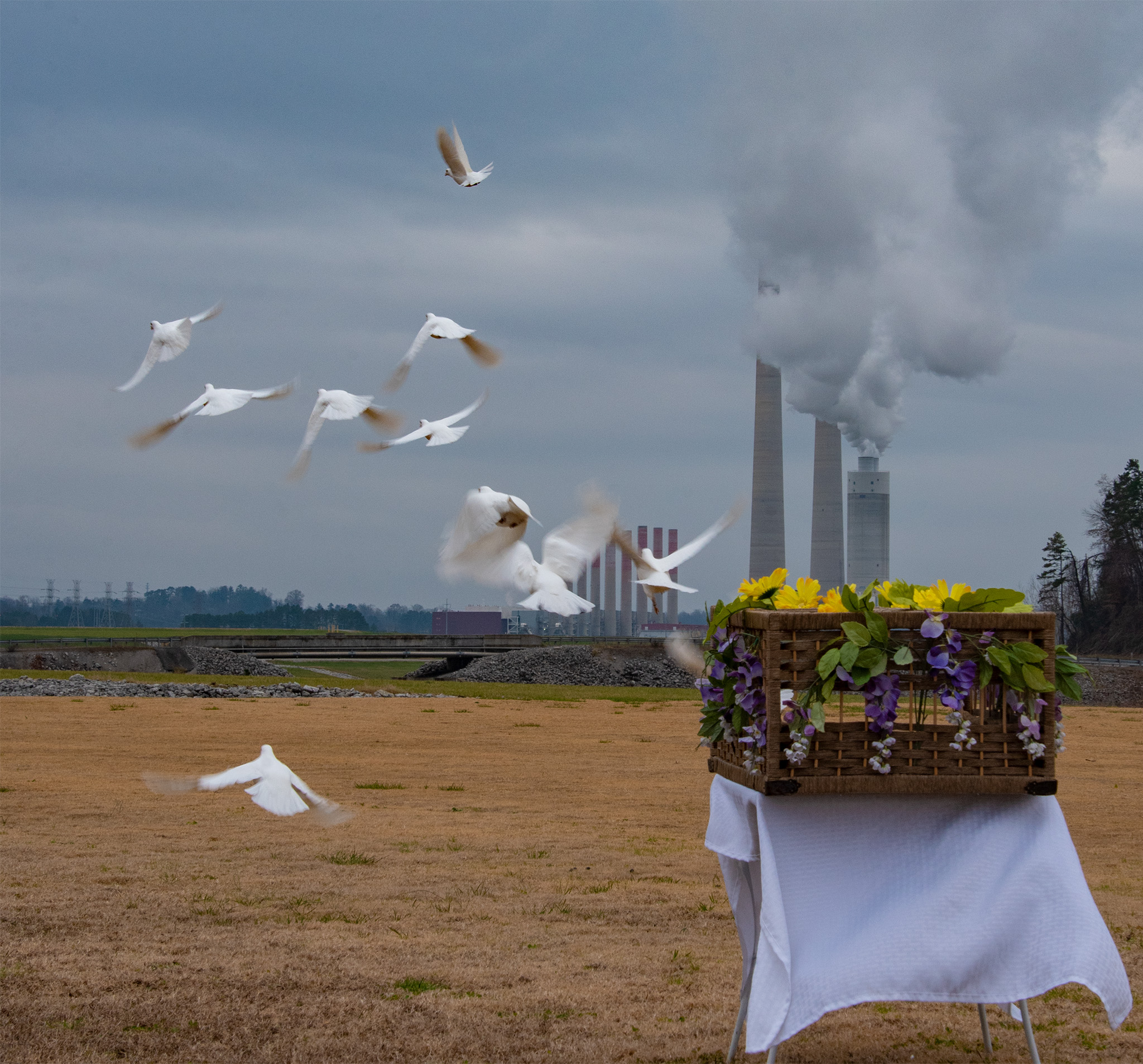 Fifty-three former cleanup workers have lost their lives due to the health impacts of coal ash exposure. White doves trained to fly back home were released during the event by Your Wings Above, a Clinton, Tennessee, company. Photo by John Todd Waterman

Coal ash workers and advocates in East Tennessee have remained committed to fighting for better health and safety protections for coal ash workers, a commitment which was made evident by every speaker during the memorial.

Other speakers included Anderson County Commissioner Catherine Denenburg and Roane County Commissioner Junior Hendrickson, whose father worked on the spill and passed away last year. Hendrickson said, “It’s a sad day when the almighty dollar is worth more than a person’s health.” Both commissioners expressed support for the workers, and Denenburg spoke to the importance of safety for workers in the impending cleanup of the coal ash stored at TVA’s Bull Run Fossil Plant.

Significantly, former TVA employee and community activist John Stewart made an announcement about the launch of a new program to bring health screenings and treatment planning to Kingston clean up workers, thanks to the efforts of John and his wife Nancy and a partnership between the East Tennessee Foundation and UT Medical Center. The announcement was followed by a moving prayer from cleanup worker Tommy Johnson, who asked for healing and strength for the workers and their families.

Organizations and people that participated in the planning of this event include: Janie Clark and Julie Bledsoe, Appalachian Voices, Statewide Organizing for Community eMpowerment, Jobs with Justice of East Tennessee, Interfaith Workers Justice, Knoxville Oak-Ridge Area Central Labor Council, and the Tennessee Chapter of the Sierra Club. 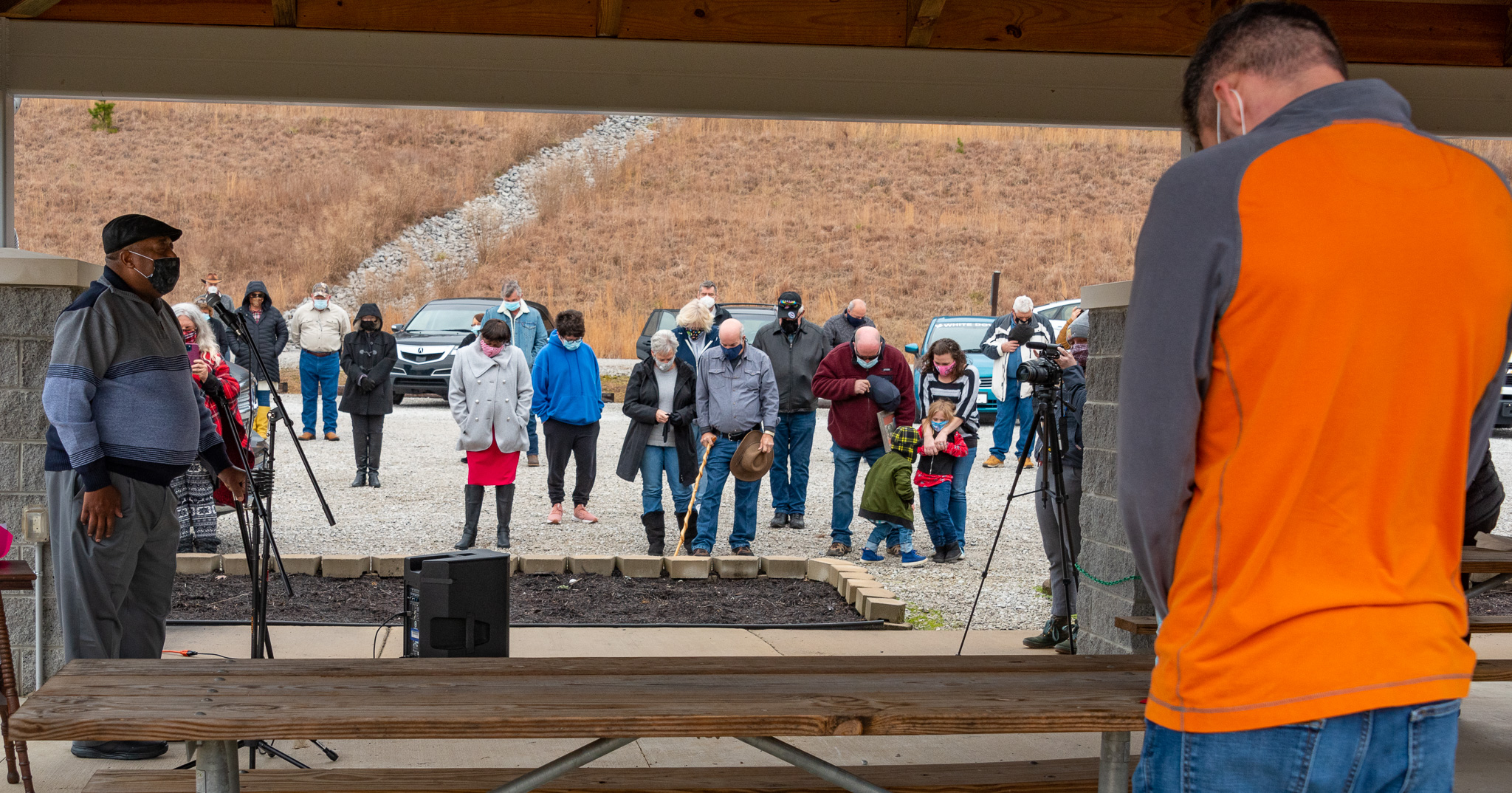 Attendees at the memorial event bow their heads as Tommy Johnson, one of the workers harmed by the spill, leads a prayer. Photo by John Todd Waterman