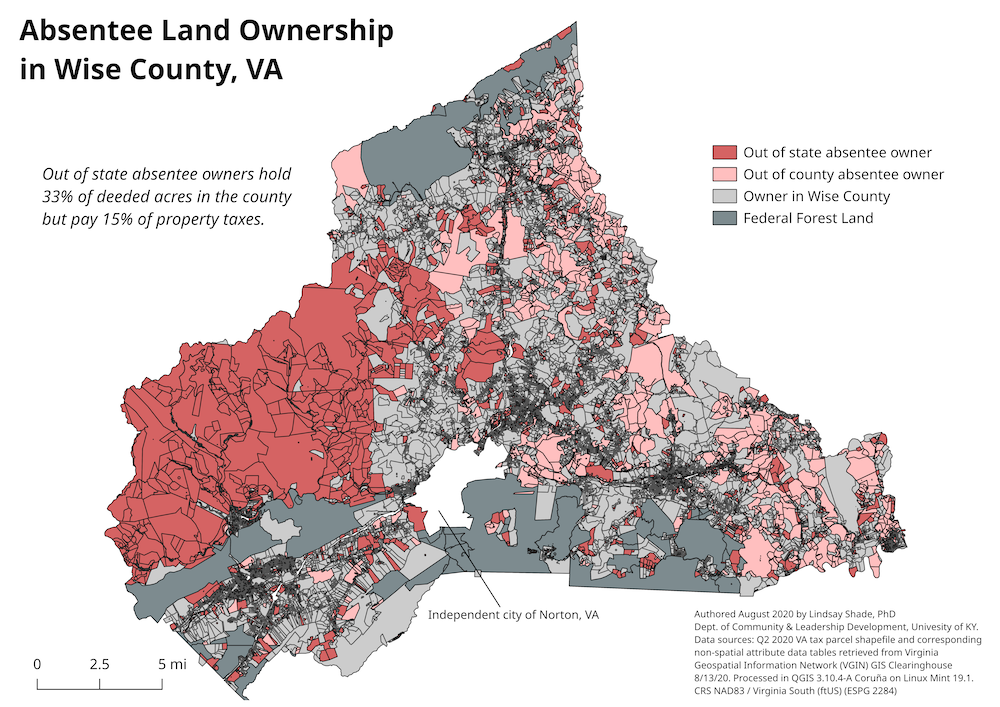 For more than five decades, the people in Central Appalachia have studied issues related to large corporate ownership of land in the region. Despite this time spent digging into the barriers and inequities of the land ownership structure in the coalfields, significant problems persist. These problems include disproportionate taxation in the region, limited access to land for farming and ranching or business development and the difficulty of economic diversification in the region. Appalachian Voices, alongside the New Economy Network of Southwest Virginia, convened community forums throughout 2020 to discuss and explore the base of this problem and create a vision for how the region can move beyond this model of absentee landownership and resource extraction.

Land in Southwest Virginia and across the region is often held by out-of-state large landholding corporations. These property owners obtain and sit on land for extended periods of time without much development or long-term economic benefit for the surrounding communities, often holding the land for its perceived coal or timber potential. 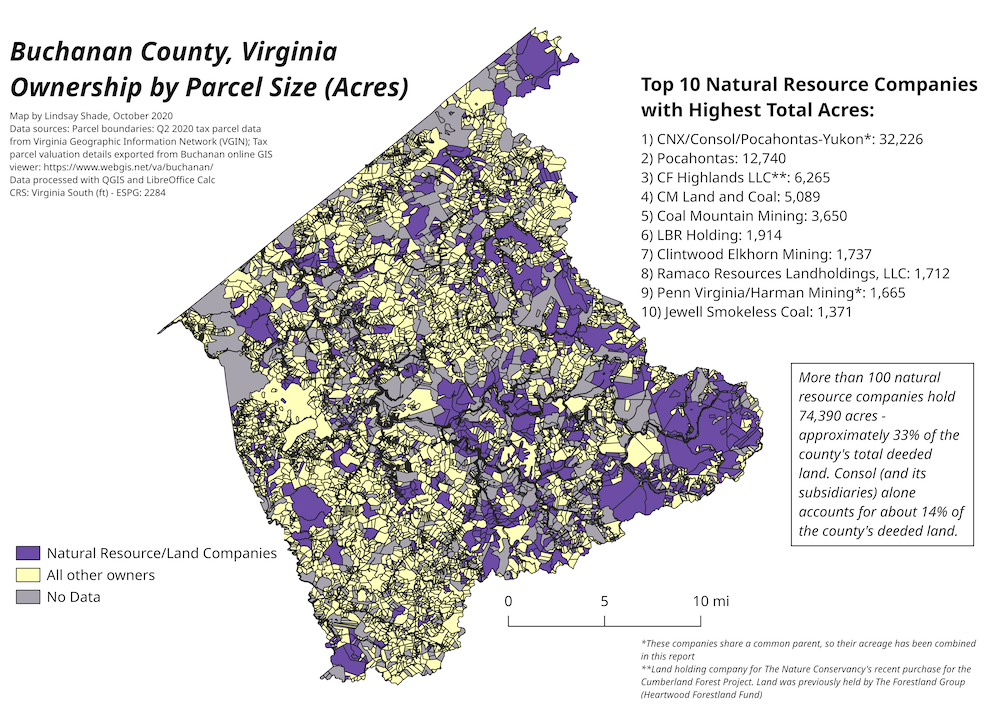 May by Lindsay Shade

In Wise County, absentee landowners were found to own more than 30 percent of all deeded land, according to state records. A startling 24 percent of the land in the county is owned by just one entity, coal and natural resource company Penn Virginia Operating Co., LLC. Not only do these companies own an exorbitant amount of undeveloped land in the region, but they also pay disproportionately low property taxes compared to small landowners. This allows them to maintain their hold on the land with little financial investment while blocking potential economic development and incentivizing extractive industries such as coal and timber.

Penn Virginia is just one example of the resource extraction industries’ hold on the region. Companies such as Pocahontas Land and Minerals, CNX Resources and a multitude of other resource extraction corporations also own significant portions of the region’s land. As the downturn of the coal industry continues to affect the communities around it, local citizens are concerned about the future of abandoned previously mined land. Ensuring that this land is sufficiently reclaimed for future use and made available to the community will be important for the region’s recovery.

Another challenge in some parts of Southwest Virginia is the accessibility of basic information needed to purchase or lease land. Wise, Buchanan and Tazewell counties already have exemplary online public access to this information. However, in some counties, users are expected to pay more than $100 for even the most basic property details. In other cases, the information is simply not accessible, existing only in books or hand-labeled online images. This inaccessibility also hinders ongoing efforts to fully understand the patterns of land ownership in the region.

These barriers are even more troublesome when considering the region’s ongoing transition away from the coal economy. This transition requires accessible land for economic development, farming, recreation and affordable housing. Due to these barriers, would-be farmers report that they cannot find land to purchase or reliably lease as many landholding companies strictly lease in one-year increments. Recreational development projects run into hurdles accessing land for new trails and connecting to regional routes. In some areas, people interested in moving to the region have a hard time finding land to purchase.

“Financial capital from outside the region, much from outside the country, was speculatively invested in Appalachian land,” says David Rouse, retired University of Virginia’s College at Wise professor and long time researcher of land ownership in Southwest Virginia. “During timber and coal booms, there has been wage employment on that land. Otherwise, it has remained vacant. The economy of the area has been severely depressed as a result. For this reason, among others, it is important that local communities become involved in determining future land use.”

In addition to periodic employment, extractive industries have also provided significant severance tax funds throughout their operation. These investments have been disproportionate when compared to the amount of wealth extracted in the communities and only last as long as the operation persists.

However, land ownership dynamics have started to change in recent years. In 2019, The Nature Conservancy purchased more than 250,000 acres in Southeast Kentucky, Northeast Tennessee and Southwest Virginia with the goal of advancing conservation efforts and making the land available to the community for sustainable economic development.

The structure of land ownership in Southwest Virginia also presents a variety of cultural issues. During our land access community forums, the lack of access for the Indigenous communities that call this land home also came into focus.

Specifically, lands once home to the Tutelo, S’atsoyaha (Yuchi), Shawandasse Tula (Shawnee), and Tsalaguwetiyi (Cherokee) nations are inaccessible to the Indigenous people who were driven out of these areas or killed hundreds of years ago. Highlighting sites such as the Ely Mound in Lee County and the Paint Lick Mountain Pictographs in Tazewell County, attendees discussed the importance of access to cultural heritage sites and recovering forests for Indigenous communities. The barriers preventing Tribes from accessing their historic land might be contributing to the lack of knowledge and education around Indigenous heritage and history in the region.

In 2020, the New Economy Network along with Appalachian Voices began planning how to bring about change on these issues. In the 2020 Virginia General Assembly session, Del. Terry Kilgore considered introducing a bill that would have given coalfield counties the option to increase property taxes on Southwest Virginia’s largest landowners. Though legislators did not introduce the bill during the 2020 session, the New Economy Network met with Del. Kilgore to discuss the possibility of introducing the bill in future sessions. The network also discussed other potential legislative solutions, including methods for increasing access to basic information on landowners and property and new pathways for increasing land availability for the community.

On Nov. 18, the New Economy Network continued discussing strategies for making land in Southwest Virginia more accessible in 2021 and into the future. The network will continue looking into legislative opportunities and meeting with legislators and county officials to improve taxation practices and increase land access in Southwest Virginia. Additionally, grassroots work around making land information available to the public has already begun in Russell County, as participants of the community forums push the county to make its online resources free of charge.

If you are interested in helping to bring forth a more equitable system of land ownership and access in Southwest Virginia, reach out to Austin Counts at austin@appvoices.org or by phone at (276) 219-2751. For information on New Economy Network events or news, check out facebook.com/SWVANewEconomy.