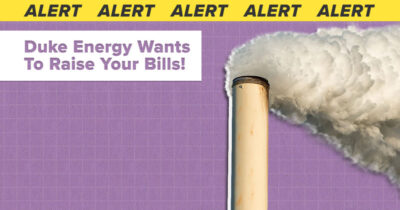 After the months-long battle this year to prevent passage of Duke Energy’s ratepayer rip-off bill (Senate Bill 559) was finally won, one might have hoped for a little respite before Duke’s next attempt to jack up rates for North Carolinians and spend our money on outdated fossil fuel projects. Alas, there will be no such reprieve.

This past week, the North Carolina Public Utilities Commission announced the dates and locations for next year’s public hearings for Duke Energy Progress’ rate cases. The commission had previously announced the January hearings for Duke Energy Carolinas’ rate cases. The formality closes the door on 2019 and solidifies eight public, and two evidentiary hearings across North Carolina’s largest utility service territories in the first half of the new year. Duke Energy Carolinas serves the Piedmont, while Duke Energy Progress serves much of the eastern part of the state and Asheville. Both are service territories of Duke Energy.

Follow this link for a full schedule of Duke Energy Carolinas and Duke Energy Progress rate cases, and also to stay in touch with Appalachian Voices and EJNC’s efforts.

In both instances, the electric monopoly is asking the commission for permission to raise the rates it charges families and businesses, called “captive” customers in regulatory parlance because they have no choice of where to get their electricity.

Appalachian Voices will be joining with the Energy Justice North Carolina coalition and other key partners to bring our power to the commission and say: No rate hikes for dirty energy! We’ll be working with grassroots groups and members like you to both prepare and collect comments to deliver to the commission. Additionally, with the support of the Center for Biological Diversity, Appalachian Voices has formally intervened in the Duke Energy Carolinas rate case.

The filings of this past year by Duke Energy have followed a fairly streamlined process, in contrast to a legislative session which saw SB 559 loom large. Similar to SB 559, Appalachian Voices has worked with the Energy Justice North Carolina Coalition to educate ratepayers and mobilize grassroots communities in opposition to the proposed rate hikes.

Duke is asking for higher rates to clean up its past mistakes (coal ash), fund its multi-million dollar grid “improvement” scheme, and lock ratepayers into paying for fossil fuel infrastructure that would prevent North Carolina from meeting the clean energy goals in Governor Cooper’s Clean Energy Plan. What’s more, the proposed hikes would continue to fund one of the biggest lobbying operations in the state, and protect Duke Energy’s monopoly control.