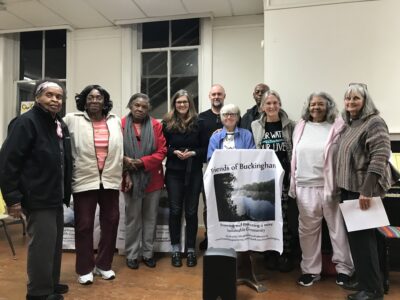 For five years, Buckingham residents have advocated tirelessly for their community. They didn’t ask for a huge industrial facility, and they never wanted to be drawn into a protracted battle with one of Virginia’s most powerful companies. Despite significant hurdles, they built relationships far and wide and shared their story with anyone who would listen. 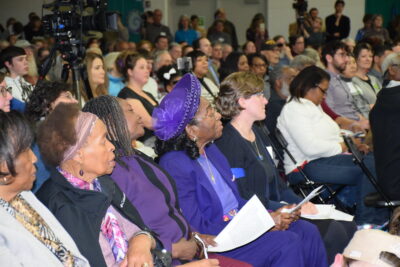 Residents of Union Hill are joined by hundreds of allies in 2019 for a protest and rally with Rev. William Barber and Al Gore against the proposed compressor station in Buckingham County. 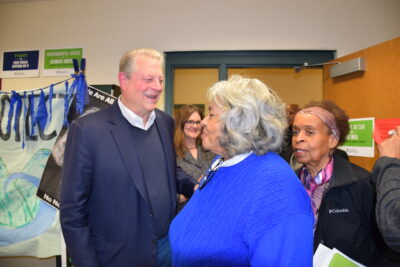 Friends of Buckingham members drove countless hours to speak truth to power in Richmond, but also to build power with allies in Northern Virginia, Mississippi, and New York (to name a few). All of this work was done on their own dime and despite the trials and tribulations in life we all experience.

Every year since the project was proposed in 2014, communities along the path have been raising the alarm about the risks to their health, homes, water, land and air. In 2015, directly impacted residents of Union Hill — the historic and predominantly African American community founded by freedmen — and other people in the county formed Friends of Buckingham to stop the proposed compressor station. It didn’t take long for them to learn of the countless threats to their community — particulate matter in the air, blow downs, reduced property values, and a huge shift of their quiet community into a huge, loud, ever-running industrial site. 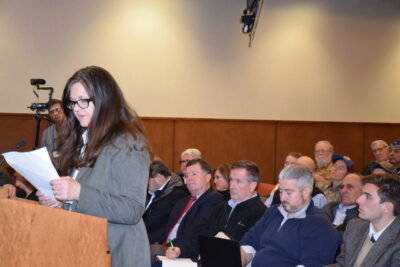 Lakshmi Fjord, an anthropologist and member of the Friends of Buckingham, speaks at a hearing at the Buckingham County Board of Supervisors, 2017. A field survey by Fjord found a predominance of African Americans in Union Hill, in contrast to claims by the state that it was not an environmental justice community.

In 2016, community members showed up to countless Buckingham County planning commission and board of supervisor meetings to raise concerns, but to no avail. The planning commission and then the supervisors approved the special use permit for the project. In 2017, the Federal Energy Regulatory Commission provided the project with the key approval – the certificate for public convenience and necessity – despite an outpouring of opposition from directly impacted communities, technical and legal experts, and people across the nation.

In 2018, the Virginia Department of Environmental Quality (DEQ) recommended that the state Air Pollution Control Board members approve the air permit for the compressor station. Over multiple meetings, the board deliberated about whether or not Union Hill was an environmental justice community and whether it would be negatively impacted by the compressor station. In the middle of these deliberations, Governor Ralph Northam removed two air board members who were making some of the deepest inquiries into risks of the proposed compressor station. Shortly after, on January 8, 2019, the remaining members approved the permit.

Despite all this, Union Hill residents never gave up. Ella Rose, a landowner adjacent to the site for the compressor station, shared that despite seemingly insurmountable odds, community members have never stop advocating for themselves. “This was done without high speed internet and with so much driving and we didn’t let up,” says Ella. “[You have to] do the best you can with what you got.”

The Southern Environmental Law Center, on behalf of Friends of Buckingham and Chesapeake Bay Foundation (which was also co-counsel to the lawsuit), took the DEQ and the Air Pollution Control Board to court for providing the project with the air permit. Arguments were heard in October and just this week, almost exactly a year after the air board approved the project, the Fourth Circuit Court of Appeals remanded and vacated the air permit: “We conclude that the Board failed in its statutory duty to determine the character and degree of injury to the health of the Union Hill residents, and the suitability of the activity to the area.” 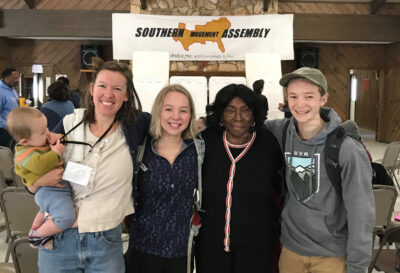 When she heard this news, Ella said, “I am so happy and so elated! Our hard work paid off but I’m not stopping because I don’t wish [for this project to land] in anyone’s backyard. I’m not giving up!” 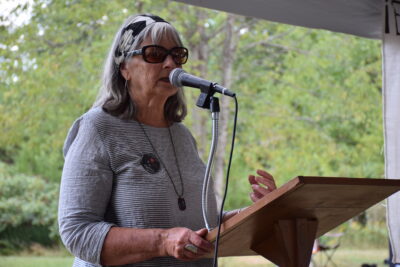 Chad Oba, president of the Friends of Buckingham, speaks at a Union Hill town hall in 2019 on land bought by freed slaves and handed down through the generations.

Chad Oba, president of Friends of Buckingham has this message: “Never give up. If you care about your community, you can’t get beat down. You can’t allow the destructive forces to beat you down. Persistence matters. It paid off for us and we are going to keep on going.”
About