Takeaways from the TVA quarterly meeting

Two Coal Plants to be Shut Down, Next Steps Toward Energy Democracy 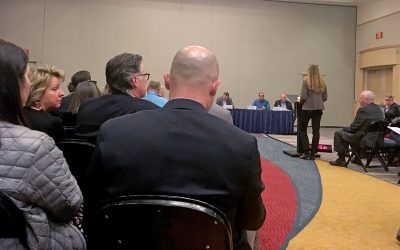 On Thursday, Feb. 14, Tennessee Valley Authority voted to close their Bull Run and Paradise coal plants during their quarterly business meeting, making it a lovely Valentine’s Day for those working toward a Just Transition. The day before, Appalachian Voices and allies had held space and shared comments in the “listening session” hosted by TVA at the Chattanooga Convention Center.

For those unfamiliar, this two-day format is a relatively new board meeting setup for the utility. It was arranged to, “allow directors additional time to consider the valuable input and opinions offered by the public before making decisions,” according to a TVA press release sent out before the previous quarterly meeting in Tupelo, Miss.

I had never been to a TVA board meeting before, and the setup surprised me with how relatively casual it felt. There were approximately 150 attendees in the room, with some people standing around the side walls. One concern brought up in comments involved the transparency of TVA decisions, and how that transparency is demonstrated around the accessibility of the listening session and board meeting. During the February meeting, only the board meeting was live streamed, restricting participation in the listening session for directly-impacted rate payers who were unable to make the meeting in person. If the point of the session is to allow broad public input for decision making, this is a concern. Further, the Finance Committee had met a week prior to the meetings, so it is questionable how much influence the public input on Wednesday actually had.

“There will still be neighbors around Bull Run facing the long-term consequences of living near a coal ash impoundment,” said Adam Hughes of Statewide Organizing for Community eMpowerment (SOCM). “And there will still be a community longing for a just and sustainable economy that provides a secure future for families across East Tennessee.”

A teacher from Muhlenberg County, Ky., who attended the meeting asked the board to keep Paradise coal plant open to prevent loss of income for students whose families were employees of the plant. As a Western Kentuckian myself, I deeply felt this pain expressed, though admittedly felt conflicted at the call to keep the plant open.

Energy production as it overlaps with family income is pretty personal to me, having lost a great-grandfather before I could meet him. The cancer he died from was tied to his work at the Paducah Gaseous-Diffusion Plant in Paducah, Ky., initially constructed for nuclear weapons production and later used for nuclear fuel.

When I hear the plea to protect wages, I notice the common struggle for workers’ rights to good health and quality of life, as well as the need for an equitable economy free from monopolies that constrict job opportunity in small communities. This is the greatest argument for organizing toward Energy Democracy — to take care of our communities and our children by moving toward renewable energy infrastructure that meets everyone’s needs as we’ve collectively defined them, in ways we’ve democratically decided.

As Appalachian Voices’ Tennessee Energy Savings Outreach Coordinator Brianna Knisley stated at the meeting: “We would like to see TVA fund research and work directly with communities to identify sustainable and renewable power generation projects for the areas surrounding Bull Run and Paradise. TVA should also support workers directly by funding training programs that promote job transitions for all employees. We hope that TVA will prioritize the input of the communities surrounding the plants to determine next steps at Bull Run and Paradise.”

It’s time to build an economy that allows us to provide for our families without risking life and good health, and invest in alternative energy sources that don’t jeopardize our planet.

“The energy democracy movement … seeks to replace our current corporate fossil fuel economy with one that puts racial, social, and economic justice at the forefront of the transition to a 100% renewable energy future … The struggle is not simply to decarbonize the economic system, but to transform it.”

True Energy Democracy requires democratic involvement of directly impacted ratepayers. This includes input with decision making, especially when determining what alternatives to build in place of coal. To achieve this, TVA must continue improving the inclusivity, accessibility and transparency of their meetings — such as adding a stream of the listening session, or other solutions rooted in community conversation.

The vote to close the Paradise and Bull Run coal plants is a definite win, and we should take some time to celebrate while also working to provide economic opportunities for those affected by the closures. This is a major step in our ongoing journey toward a just transition for Kentucky and Tennessee. We’re in a pivotal moment, no doubt. Now is the time to continue to organize forward together.