Editor’s Note: This blog is part of an ongoing series about coal bankruptcies and business changes affecting Central Appalachia. Read more about the Westmoreland bankruptcy here.

In October 2018, the oldest coal company in the United States filed for Chapter 11 bankruptcy. While now largely operating in the western United States, Westmoreland has many historical ties to Southwest Virginia. The history of Westmoreland Coal is also connected to another eastern company known as Penn Virginia, which experienced a bankruptcy in 2016. Understanding the history of these companies contributes an important perspective into what is happening with coal in Central Appalachia. The companies’ history includes some of the most powerful companies and people in Southwest Virginia.

A Brief History of Coal in Southwest Virginia

In 1795, just three years after the state of Kentucky was formed and Lee County broke off from Russell County in Virginia, a land grant was given to three men by the names of Fields, Jason and Taylor. The grant contained over 62,000 acres of land and encompassed most of the coal mining areas around Black Mountain west of what is now the city of Norton. The original grant contained a few exclusions including local residents who had claims to the land through “squatter rights.” The land overlapped an area that would come to be known as the Hagan tract. In 1836, Lee County decided to collect unpaid back taxes on heirs of the property of the land grant by repossessing some of the land. Lee County then resold 49,200 acres of the original land grant to John C. Olinger.

In the 1880s, E.K. Hyndman was president of Tinsalia Coal and Iron Company, which formed with help of former Confederate general John Daniel Imboden. Imboden was in charge of acquiring property in Wise County for the Tinsalia Coal Company, and one of his agents acquired most of Olinger’s land, according to Black Mountain, a book by Lawrence J. Fleener, Jr.

Tinsalia Coal’s Hyndman brought the Virginia holdings to the attention of John Leisenring. In 1881, Hyndman succeeded in selling Tinsalia and additional lands totaling 70,000 acres to Leisenring and his group Virginia Coal & Iron Co. With the Tinsalia Coal Company also came the South Atlantic and Ohio Railway, which connected the town of Appalachia, Va., to Bristol, Va. The railway was needed to make the transport of coal economical.

The Interstate Railroad, headquartered in Andover, Va., was also built during this time by Stonega Coke and Coal to haul coal from Stonega to Appalachia. It was during this early period that many of the recognizable coal and railroad camps in Wise and Lee counties were built, including Stonega and Andover, according to Virginia Coal and Iron Company, a book compiled by E.J. Prescott.

Virginia Coal and Iron acquired 52 percent of Westmoreland in 1962. Two years later, Westmoreland merged into Stonega Coke and Coal. The newly combined company went by the name Westmoreland, to preserve the name of the oldest coal mining corporation in the United States.

Five years later, Penn Virginia and Westmoreland tried to merge into a single business entity, but that was rejected by committees led by the two companies, largely due to decline in value of Westmoreland shares relative to Penn Virginia, according to a book self-published by Westmoreland. This ultimately led to a more complete separation of the two companies. Still, Ted Leisinering Jr. served as the chief executive officer for both companies for many more years despite the lack of legal connections. There were also still many family connections between the two companies given their long history. Even now, their corporate logos are very similar. 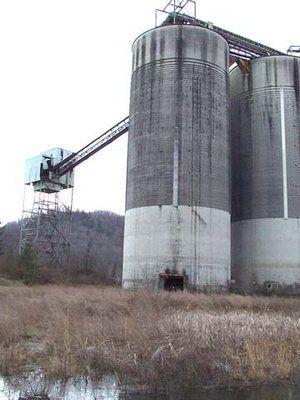 During the last half of the 20th century, Westmoreland operated many mines in Virginia, though probably the most iconic was the the Bullitt Mine and coal processing facility just outside of Appalachia, Va. Here, six multi-story coal silos stood like giant sentinels standing guard over the town for many years. The mine opened in 1969 and closed when production began to decline in the early 1990s. In 1994, Westmoreland went bankrupt for the first time and closed its Virginia operations in 1995. Following this bankruptcy, Westmoreland transformed from a primarily an Eastern underground coal company, to a primarily Western surface mine coal company.

The old Bullitt Mine complex still sits largely unreclaimed just west of the town of Appalachia. The property is now mainatained by A & G Coal Corporation, which was forced to tear down the coal silos in 2016 by the Virginia Department of Mines, Minerals and Energy because of the company’s failure to reclaim the area. For a while, Westmoreland maintained a small office in Appalachia to help its former miners with health benefits, but in 2014 that closed as well.

In October of 2018, Westmoreland filed for Chapter 11 bankruptcy in the southern district of Texas. There is a public auction for Westmoreland’s assets scheduled for January 22, 2019. Many union miners both here in Virginia and abroad are concerned about their continuing health benefits including black lung payments. Westmoreland’s bankruptcy could still be felt in Southwest Virginia by now-retired miners, but it is unclear what the future holds.