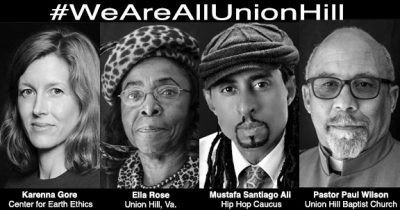 [UPDATE December 31: At its Dec. 19 meeting, the air board delayed action on the permit and opened a new public comment period to specifically address the issues of siting and environmental justice. The comment deadline is January 4 — you can sign this Change.org petition. The board is schedule to meet January 8 to consider action on the permit.

Visit our action page for more.

In the meantime, the number of signatories to the Friends of Buckingham letter to the board urging they deny the permit has grown to 265, including Dr. Robert Bullard, widely considered the “father of environmental justice,” Dr. Helen Caldicott, Bill McKibben, Chase Iron Eyes, a member of the Standing Rock Sioux Tribe, and many more. See the new list of names here.]

Residents of Union Hill sent an open letter Dec. 8 to the members of the Virginia Air Pollution Control Board urging them to deny the proposed permit for a natural gas compressor station in this predominantly African-American community in rural Buckingham County, Va. (The board was scheduled to meet two days later and most likely vote on the permit, but the meeting was post-poned to Dec. 19 due to snowy weather.)

The letter is signed in solidarity by 100 people, including Karenna Gore, director of the Center for Earth Ethics, Tim Guinee, actor and chair of the Climate Reality Hudson Valley Chapter, actors Don Cheadle and Ed Begley, Jr., Rev. Lennox Yearwood, Jr., president of the Hip Hop Caucus, dozens of impacted community residents. It was also signed by Appalachian Voices and many other organizations that represent thousands of Virginians, environmental justice advocates, clean energy supporters and climate activists.

The signers are Pastor Paul Wilson, Union Hill Union Grove Baptist Church; Chad Oba, president of Friends of Buckingham, and Lakshmi Fjord, anthropologist and Union Hill historian. Now with another week before the board meets, the Friends of Buckingham and its allies are calling on more local residents and regional and national environmental justice advocates to add their names to the growing list of supporters.

The letter urges the board to allow the public to speak at the upcoming meeting, before any vote on the permit is taken, and to deny the permit. It concludes: “The legacy of placing toxic facilities in places where they disproportionately affect poor communities of color is unjust and unacceptable and needs acute examination. It is not right to look the other way while this continues.”