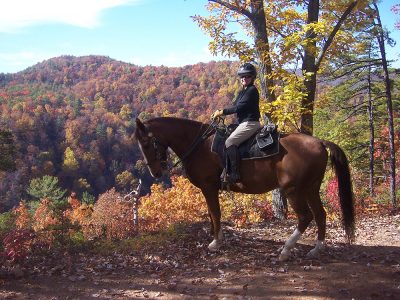 Deirdre Perot is the national public lands representative for the Back Country Horsemen of North Carolina, a nonprofit organization that works to maintain backcountry horse trails. She is also a co-founder of the Nantahala-Pisgah Forest Partnership, a collaborative group of conservationists, cultural interests, recreational users, timber industry representatives and more who are seeking to shape the revision of the Nantahala and Pisgah National Forests’ management plan. Answers have been edited where needed for clarity and length.

“My relationship — separately, me — with the forest is a user, and I use the forest in several different ways. I hike, I drive for viewsheds and I ride my horse. One thing that a lot of people say is, ‘if you get on your horse you’re right out there.’ This nation was founded by people on horseback, and to be able to get out there in the national forest on public land and get on horseback and explore, we’re taking ourselves back to our cultural heritage. It really ties you so well to the forest, and to your partner the horse. I have my dogs usually along with me, so it’s my dogs and my friends. And we’re all out there enjoying something that is such a unique ability to be able to get out. So many countries do not have the public lands that we here in the United States enjoy. I feel like I’m a steward of the land. My favorite saying is ‘take only memories and leave only hoof prints.’”

“It truly is a fulfilling thing. We can get out there and say we’re being selfless, but in reality if you don’t go out there and you take back more than you came with, you’re doing yourself a disservice. These public lands are there to enjoy, and we need to remember that we are filling up our spirit when we’re out there — it’s feeding our soul. Go out there and be selfish and enjoy it and get the most good you can from it, but also be a really good steward to the land at the same time.”

“Proximity is definitely something, because it is right here. The fact that there is diversity in the groups. But my folks, the folks that I hang out with, the folks that I ride with, feel the diversity of the users that we encounter out there. The Back Country Horsemen is a really good example of an organization that works and works away out there in the forest.”

“But we’ve also tried to do some social meetups and stuff like this to try and illustrate the fact that it’s cool to share the trails; all the kids love to pet the horsie. And we can interact with mountain bikers and hikers and hunters and fishermen and other campers and such. We can, and we can all enhance each other’s experience. I love the fact that the Nantahala-Pisgah — I know Pisgah better, so I’m going to speak for Pisgah — I feel like there is a Pisgah character out there. The Pisgah character experience is multidimensional; challenging trails, along with some tame ones. But mostly challenging trails. Being out in the element while you’re not all that far from civilization. Asheville is not all that far away; but once you get past a couple miles of bends in the trail, you are out there.”

“Right now, it’s got to be the Buncombe Horse Range. It’s a 19-mile long single-track trail that runs from the south end at South Toe River near the parkway, and it kind of works its way northwest up to Highway 128 which runs out to Mt. Mitchell. It works its way up to Mt. Mitchell, and then on up to Maple Camp, back down on the other side, back towards Colbert Creek Rd. This trail is unique in that from end-to-end, you’re picking up and dropping off about 4,000 feet in elevation.”

“Last summer we were up there one day, It got up to 95 degrees here in Rutherfordton, but it barely broke 70 degrees up there. We were riding up above the clouds, it was just absolutely gorgeous. And because there’s not very much parking, which is a challenge for horse trailers, it’s just not very well known and is not very well used.”

“And we carry chainsaws, loppers and saws up there every time we go because there’s always something downed. It gives another dimension to riding, you’re out there doing a good thing. You’re keeping that trail open.”

“Honestly, all of the forest elements need to be preserved.The thing that I found working inside the stakeholder forest forum and the partnership, is that there is the ability to preserve all the elements; for hunters, anglers, the rugged trail, the backcountry experience and the ecological integrity, as well as the resource. There is the ability to take care of every one of those things.”

“There’s absolutely nothing we can’t accomplish if we sit down and talk together. The Forest Service, in their 2012 planning rule change, has absolutely laid the groundwork for being able to get everything done that needs to be done. There’s no reason why people have to pick one element to preserve in the forest over the other; all of the elements can be preserved.”

“Some of the stuff that our interest group would love to see is more access. It’d make sense if you have an equestrian trail there that you’d have horse and truck trailer parking. That’s not always been the case, so we want to build that access into the forest plan. If there’s not an equestrian trail there, don’t worry about trailer parking. You won’t have any. And [the Forest Service] didn’t know that loop trails were something that we would treasure. They didn’t know that a loop trail was more advantageous than a straight out and back, and they were happy to hear that.”

“Well, let’s think of it this way. Mountain bikes didn’t exist when the last plan revision occured in the ’80s. The Forest Service absolutely needs to revise their plan every 15 to 20 years to stay current with current events. There’s been practices that change over the years; there were ways that we dealt with invasive species that we found were not really conducive.”
“The best science changes over the years, it’s just being a good steward looking at things that are new. Change is a necessary evil. In reality, the core principles are not changing. The way that we react to climate change needs to be factored in and the management plans have to adapt.”

“Nothing that they haven’t heard every month! I have to say working very closely with [the Forest Service], they are some of the most dedicated, smart, most hard-working people I have ever met in my entire life.”

“I know that their challenge is astronomical, so my advice is to try not to pull your hair out. For the most part, they seem to be the most patient people I’ve ever met in my entire life. Some of the things that they’ve had to deal with and go through; their task is herculean. To educate everybody, to please everybody and to balance every time they make a slight adjustment.”

“[Back Country Horsemen’s] mission statement is to protect and enhance the equestrian use of our public lands. So staying with that mission statement, we want to preserve the current equestrian access that we have on the forest trail. We’d like to enhance the access that we’ve got by looking at some additional parking in some areas. We want to have the Forest Service’s support for the horse camping that we have.”

“Yes I do. I think that in order to do that, the Forest Service needs to increase timber harvest for economic reasons as well as for the creation of early successional habitat. We absolutely can do both. When we look at additional wilderness areas, we need to be considerate of access for emergencies and that’s one of those things that I think comes up a lot.”

“It’s looking at this and getting everybody to look at the same picture. The timber harvesters have been struggling. Across [the Nantahala and Pisgah National Forests’] 1.1 million acres they’ve been able to do 700, 1,400 acres per year. We could increase that 4,000 to 10,000 acres per year without touching any of the wilderness study areas or inventoried wilderness that could be moved over. In my mind I don’t see that there’s a dichotomy here, I see that we could increase capacity on both sides.”

Do you feel like your interests conflict with other stakeholders?