Giant Hogweed Sprouting up in Appalachia

New patches of giant hogweed, a toxic species indigenous to the Caucasus Mountains in Eastern Europe, have been discovered growing in western North Carolina’s Watauga County. According to Dr. Jim Hamilton, director of the North Carolina Cooperative Watauga County Extension, officials have been dealing with the noxious weed in the county for the past 10 to 15 years. It was originally planted by some homeowners as a decorative yard plant. 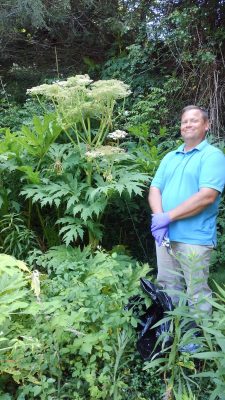 Giant hogweed can grow to 15 feet tall and excretes sap that can badly blister skin and cause blindness if it comes in contact with eyes. According to Hamilton, the sap is photo sensitive, meaning it reacts when exposed to sunlight, but not every individual experiences an extreme reaction. Individuals who encounter the sap should immediately wash the area with soap and cold water and avoid the sun. If sap gets in your eyes, rinse them with water and put on sunglasses. If you experience any reaction, call a doctor.


Watauga is the only county in North Carolina so far where giant hogweed has been identified. The weed is also found in Clarke, Faquier and Rockingham counties in Virginia, and CBS News reported patches in New York, Pennsylvania, Ohio, Maryland, Oregon, Washington, Michigan, Vermont, New Hampshire and Maine.

The tall plant contains flowers that resemble those on the much smaller Queen Anne’s lace, and is often confused with cow parsnip, a plant loosely related to giant hogweed but native to North America. According to Hamilton, hogweed seeds can live dormant in soil for up to 15 years before germinating, making it especially challenging to eradicate.

If you identify giant hogweed, do not try to cut it down; instead call your state invasive species division or contact your local agricultural extension agent. ­ — By Locke Curtis & staff