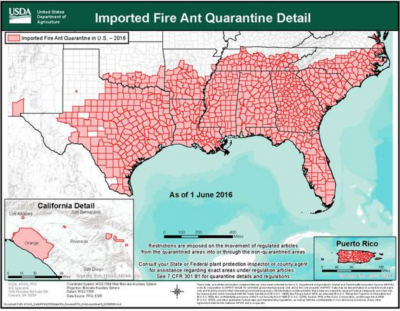 Distribution of fire ants in the United States as of 2016. Map produced by USDA-APHIS

New research from Western Carolina University in Cullowhee, N.C., suggests that fire ants living at higher altitudes are becoming acclimated to cold conditions, indicating that the invasive species is adapting to cooler temperatures in ways that scientists do not yet understand.

Introduced in Mobile, Alabama, in the 1930s, fire ants have lived in North America for decades in lower-elevation areas. Since then, the species has spread northward and can be found at elevations of 4,000 feet and higher across southern states, including much of Tennessee, parts of North Carolina and the southeastern corner of Virginia. Though these ants can persist at higher elevations, particularly in North Carolina’s Jackson and Macon counties where this study was focused, there have been no recorded sightings along the Blue Ridge Parkway.

The heavily forested land of Western North Carolina provides limited access to open and sunny areas suitable for colonies. However, should fire ants gain a greater presence, they pose a threat to native plant and ant populations, according to Jim Costa, a coauthor of the study.

In an interview with Smoky Mountain News, Costa advised against the assumption that fire ant populations will be controlled by seasonal weather and encourages efforts to keep invasive species at bay. — By Emerson Wells