Asian Carp Barriers to be Erected on Tennessee, Cumberland Rivers 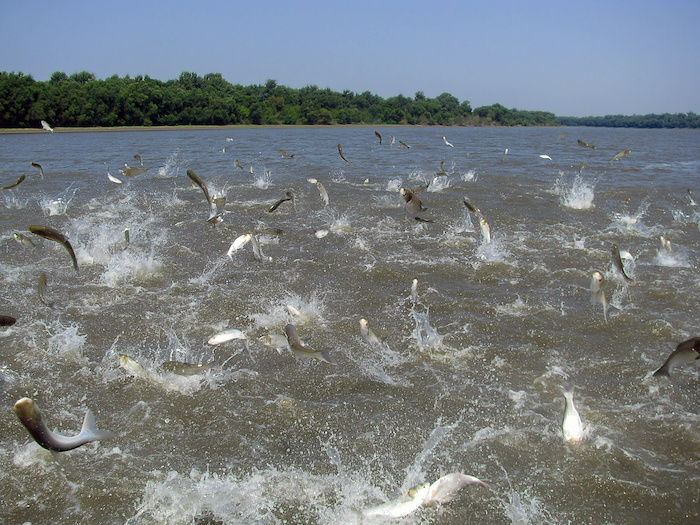 Flying Asian carp can jump out of the water and cause boating accidents. (Adobe Stock)

NASHVILLE, Tenn. — As the state continues its battle against invasive Asian carp, environmentalists say plans to erect new barriers to stop the carp from entering the Tennessee and Cumberland rivers are a step in the right direction.

Michael Butler, CEO of the Tennessee Wildlife Federation, said Asian carp continue to be a massive problem for Tennessee’s fishing and outdoor recreation industries, and noted the state recently received $25 million in federal funding to help erect barriers to stop carp from migrating.

“So they outcompete our native bait fish and they occupy a large volume of water when they get to be in large schools,” Butler described. “That in turn impacts the fishery, which in turn impacts tourism.”

He pointed out the state’s fishing economy generates more than $1 billion annually.

Asian carp are now found in all three of Tennessee’s major waterways, from the Mississippi River to the Tennessee River north of Chattanooga.

Butler noted the money will help fund several barriers that often use combinations of sound, light, bubbles and other technologies to block the migration of carp from downstream reservoirs.

He added barrier technologies are currently being tested at the Barkley Dam, which separates the Cumberland River Basin from the Ohio River.

“25 million may or may not be enough,” Butler cautioned. “So, we’re going to continue to evaluate the funding needs for the program here in the Tennessee and Cumberland river systems.”

Asian carp can grow up to 100 pounds and can threaten boaters’ safety.

“There are four species of Asian carp,” Butler explained. “And one of them jumps into the air pretty regularly and can weigh up to 30 pounds or more. And so, that’s not something you want to have running into you if you’re driving in a power boat or a jet ski.”

Asian carp have no natural predators and they consume the bottom-chain food sources of native fish, which can have devastating effects on habitats.