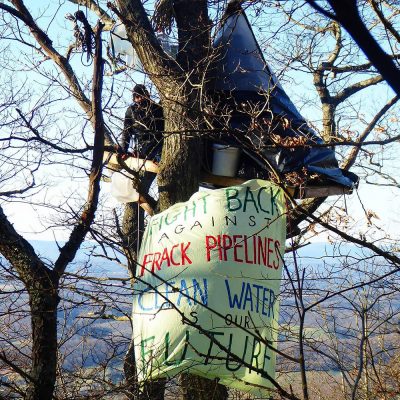 A tree-sit established in February 2018 to block Mountain Valley Pipeline tree-felling in the Jefferson National Forest. Photo courtesy of Appalachians Against Pipelines

On May 20, a young woman named Fern set up camp on a tree platform in a Virginia forest to block construction of the fracked-gas Mountain Valley Pipeline. Twelve days later, she was forcibly removed, and another tree-sitter on Peters Mountain in the pipeline’s path in West Virginia was also evicted.

This came shortly after the U.S. Forest Service barred another tree-sitting pipeline protester’s access to food, water and medical care, eventually compelling her down. In Roanoke and Franklin counties, several other tree-sitters were recently compelled to leave their perches in trees on private lands due to a federal judge’s threat of hefty daily fines.

The movement to stop the 300-mile Mountain Valley Pipeline is vast and increasingly broad, crossing geographic and ideological divides. So, too, is resistance to the 600-mile Atlantic Coast Pipeline. Legal challenges to both projects have traction, and a growing bipartisan chorus of state legislators and local officials is sounding the alarm.

By supporting the profiteering aims of a private fracked-gas pipeline company and monopoly utilities over the clear will of the people, the government agencies abetting these projects are standing on the wrong side of history.

The governors of North Carolina, Virginia and West Virginia should join Virginia Sen. Tim Kaine and U.S. representatives from both parties in calling for federal regulators to reconsider the improperly approved projects. And they should halt construction while this vital assessment takes place.

States have the authority — and responsibility — to protect their own waters. Unfortunately, Virginia and West Virginia have so far deferred to the federal government’s improper use of a “one-size-fits-all” water quality permit without scrutinizing any of the thousands of individual water crossings of the two pipelines, many of which are on steep mountain slopes prone to erosion and mudslides. 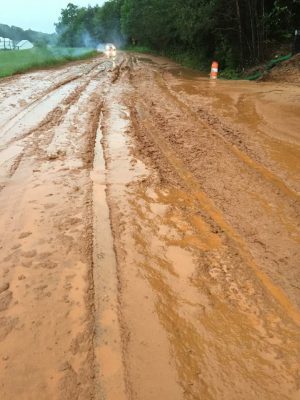 After days of heavy rain in Franklin County, Va., in May, 2018, erosion controls at a Mountain Valley Pipeline construction site failed and caused a mudslide, blocking this road. Photo by Dylan Guilliams

These states owe it to their citizens to conduct rigorous reviews of the pipelines’ effects on water quality. In fact, on the gubernatorial campaign trail in Virginia last year, then-Lt. Gov.Northam said the state’s Department of Environmental Quality, at his request, would do a stream-by-stream review of water crossings. Now governor, Northam has failed to deliver.

Residents along both pipeline routes are documenting violations and testing water quality, providing more evidence that these projects cannot be built without putting people, water and ecosystems at risk.

It’s time for state and federal leaders to act.

P.S.: Our April/May issue focused natural gas fracking, frack waste, pipelines and proposed petrochemical plants and gas storage hubs. We’re grateful to the extraordinary volunteers who helped boost our distribution across the region from 65,500 to 72,500 copies for that special issue. Read it online here.