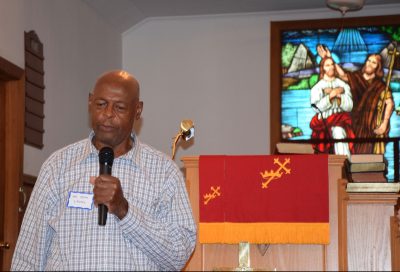 Retiree John Laury has recently been researching cemeteries near his home in Union Hill, a small community in rural Buckingham County, Va., where slaves and their descendants were buried. It’s been difficult — some of the deceased are likely his forebears and most graves are unmarked, long ago forgotten.

His project has taken on a new urgency. Several years back, Dominion Energy applied to the Federal Energy Regulatory Commission to build the 600-mile fracked-gas Atlantic Coast Pipeline, running south from West Virginia through Virginia and North Carolina, including a massive compressor station in Union Hill. Both Dominion and FERC, which has approved the project, have essentially ignored the deep history of the community, founded by freedmen and still predominantly African-American. This cultural “erasure,” as anthropologist Lakshmi Fjord describes it, is nothing short of racist.

Laury and Fjord were among those who spoke in late May to the Governor’s Advisory Council on Environmental Justice, whose members traveled to Buckingham County to hear from concerned citizens and tour the area. The council was formed in 2017 to examine how certain segments of the population may be disproportionately impacted by pollution, and to make policy and legislative recommendations to address these environmental injustices. (A similar council has just been announced in North Carolina; and on May 15, a coalition of organizations filed a complaint with U.S. Environmental Protection Agency’s Civil Rights Compliance Office that the Atlantic Coast Pipeline unjustly targets minority communities in that state.) 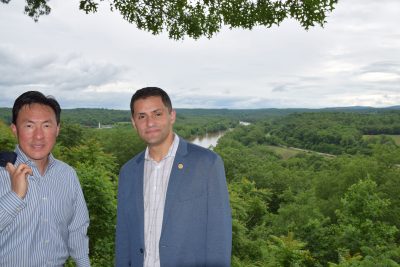 Virginia Delegates Mark Keam (l) and Sam Rasoul, with the James River in the background. The delegates heard from residents of Union Hill and Yogaville in Buckingham County about threats from the Atlantic Coast Pipeline. Photo Cat McCue.

Virginia Delegates Sam Rasoul and Mark Keam, who have staunchly opposed the Atlantic Coast Pipeline, and the similar Mountain Valley Pipeline proposed by EQT, were in attendance at the gathering in Buckingham County and encouraged the citizens to keep fighting.

“It’s important that the entire commonwealth knows what is happening here,” Rasoul said. “To me, it’s just one injustice and lacks fairness on so many levels.”

The homes in Union Hill are mostly modest, brick or wood frame houses that in and of themselves hold little historic significance. But they are occupied by descendants of slaves and freedmen, like Laury, who have been living in the community continually for generations. “It’s that continuity of history that’s important,” said Fjord. In 2016, Union Hill received a “Most Endangered Historic Place” listing by Preservation Virginia due to threats posed by the pipeline and compressor station, and the community is now nominated for listing by the Virginia Department of Historic Resources. 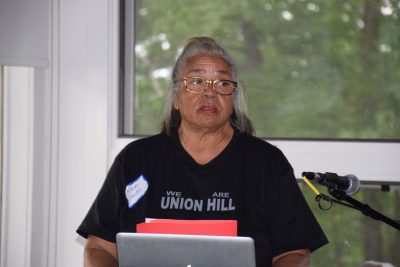 At the advisory council meetings, Fjord and others shared a host of examples of how Union Hill is being overlooked during the regulatory process for the pipeline and compressor station. Neither FERC nor the Virginia Department of Environmental Quality held a public hearing in the county, so very few citizens could afford the time or expense to provide their comments in person. Dominion and FERC underreported the population density of the community, using a countywide average instead. As a result, the pipeline can be built with thinner walls and farther distances between emergency shut-off valves. And despite the fact that FERC’s final environmental report noted that the compressor station would be in a census tract designated as a low-income, environmental justice population, it approved the project anyhow, and Dominion has made no plans to change locations.

Union Hill’s plight was a key impetus for a meeting in Charlottesville last year of the People’s Tribunal on Human Rights and Environmental Justice Impacts of Fracked Gas Infrastructure, an internationally recognized entity, independent of government authorities, that presents evidence of human rights abuses around the world. The tribunal judges issued a recommendation calling for an immediate halt on both the Atlantic Coast and Mountain Valley pipelines pending “thorough investigations, such as environmental, cultural and health impacts assessments, with real voice and real vote from the community.” (View the presentation made to the full People’s Tribunal in May 2018.)

On May 30, the Governor’s Advisory Council on Environmental Justice adopted a draft statement calling for a moratorium on new gas infrastructure in Virginia and a stream-by-stream analysis of the impacts of the Atlantic Coast and Mountain Valley pipelines. The council expects to finalize its recommendations to Gov. Ralph Northam’s administration soon.

It can’t come soon enough for Chad Oba, another Union Hill resident who spoke to the advisory council and who has been deeply engaged in fighting the Atlantic Coast Pipeline. She has worked in Buckingham County for 27 years as a mental health professional, and has seen growing levels of anxiety and stress among her neighbors since plans for pipeline and compressor station were announced. The uncertainty and sense of loss of control is taking a clear toll, Oba said. “Our lives are really on the line here.”