On June 1, President Donald Trump ordered Secretary of Energy Rick Perry to stop coal and nuclear plants from closing, citing national security and grid reliability. A draft White House memo with a plan to bail out those plants by forcing grid operators to purchase coal and nuclear power for two years was released the same day. 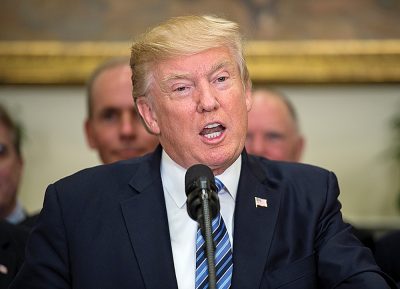 In a statement, PJM-Interconnection — which manages much of the Eastern electric grid — said, “Any federal intervention in the market to order customers to buy electricity from specific power plants would be damaging to the markets and therefore costly to consumers.”


Mary Anne Hitt, director of the environmental group Sierra Club’s Beyond Coal campaign, decried the announcement in a statement.

“This is an outrageous ploy to force American taxpayers to bail out coal and nuclear executives who have made bad decisions by investing in dirty and dangerous energy resources,” the statement read.

Dozens of coal plants were shuttered in 2017, according to Forbes, and Mother Jones stated that “at least 14 coal-fired plants are scheduled to close” in 2018.

In January, the Federal Energy Regulatory Commission denied the Trump administration’s proposed subsidies for coal and nuclear power plants. Policy firms Energy Innovation Group and Climate Policy Initiative projected the subsidies could cost taxpayers as much as $11.8 billion a year.

Trump has promised to bring a resurgence to the coal industry. But while preliminary numbers show a slight bump in Central Appalachian coal jobs to date, not much has changed nationally.

Preliminary employment numbers for the first quarter of 2018 show an 11.4 percent increase in Central Appalachian coal jobs since 2016, or 1,824 jobs. This is less than half of the region’s employment numbers from 2011, when coal jobs entered a six-year freefall. Overall, from 1984 to 2017, Central Appalachian coal jobs declined by over 77 percent, according to data from the U.S. Mine Safety and Health Administration.

Nationwide, coal production increased by 6 percent in 2017, but coal jobs only grew by 2 percent, or 918 jobs. Preliminary numbers for the first quarter of 2018 show a loss of 700 jobs, nearly back to the low nationwide levels of 2016.

This mismatch between production and employment gains can be attributed to widespread automation in the industry, especially at large western surface mines that provide nearly half the country’s coal.

Coal consumption in the United States has dropped roughly 2 percent from 2016 levels, according to estimates from the Rhodium Group, an independent research organization — but the report shows that production of coal used for steelmaking rose in 2017 due to an increase in exports.

According to the U.S. Office of Surface Mining Reclamation and Enforcement, Pennsylvania, West Virginia, Kentucky and Virginia all experienced increases in new mining permits issued between July 2016 and June 2017 compared to new permits issued in the previous fiscal year.

However, this doesn’t necessarily mean more mining. Even though these states had more new permits, the acreage covered by them is nearly 45 percent less than the previous year’s new permits.

On the policy front, the Trump administration has repealed several coal-related regulations meant to protect communities and the environment. In February 2017, Congress overturned the Stream Protection Rule, a rule passed late in 2016 and backed by nonprofit organization Appalachian Voices, the publisher of this newspaper. The rule was projected to protect or restore an estimated 6,000 miles of streams and 52,000 acres of forest over 20 years.

In January 2018, The New York Times exposed Trump’s close ties to the coal industry when it published an “action plan” the CEO of Murray Energy Corp. sent the administration in March 2017 outlining policy goals for Trump’s first year.