A variety of economic factors have caused a steady decline in the Appalachian coal industry for many years now, but coal mining is not over. While signs suggest that coal’s dominance over the region’s political and literal landscapes is drawing down, community members say that matters little in places where mountaintop removal mining is still happening and where states continue to issue new surface mining permits.

One of these areas is Coal River Mountain in southern West Virginia. According to data collected by the Mine Safety and Health Administration, coal production across Central Appalachia plummeted by around 42% between 2018 and 2020, dropping from nearly 80 million tons to an estimated 47 million tons (based on predictions for the fourth quarter of 2020). During that same period, Raleigh County’s coal production only dropped from 6.5 million tons to around 6 million tons.*

Data sourced from the Mine Safety and Health Administration by Open Source Coal. Map by Matt Hepler

This is in large part due to the aggressive mining of Coal River Mountain by Republic Energy, which shows no signs of letting up any time soon. Republic, a subsidiary of Alpha Metallurgical Resources (previously named Contura), currently has two additional mine permit applications in Raleigh County under review by the West Virginia Department of Environmental Protection. If approved, the Paint Mountain and Turkey Foot mountaintop removal mines would raze over 2,000 acres of native forest land on Coal River Mountain and neighboring Paint Mountain, adding to the company’s existing 10+ square-mile swath of surface mines in the immediate vicinity. 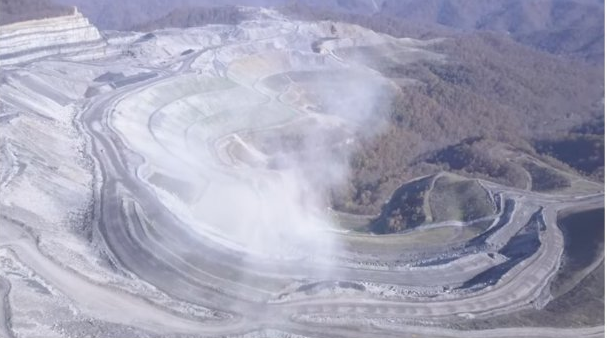 “We’re seeing the same impacts as usual,” Vernon Haltom of Coal River Mountain Watch, a community organization that has been fighting mountaintop removal in the area for over two decades, wrote in an email. His organization has objected to the proposed Turkey Foot mine, and is monitoring the impacts of other Republic Energy mines that are already active on Coal River Mountain.

“We’re seeing the ground shaking miles from a blast, and dust clouds drifting for miles, delivering carcinogenic silica dust into the lungs of children, women and men in neighboring communities,” Haltom wrote.

Drone videos recorded by Coal River Mountain Watch in November of 2020 appear to show dust clouds produced by blasts on Republic Energy’s Middle Ridge mountaintop removal operation drifting well beyond the mine site and settling onto neighborhoods along McDowell Branch and Workman’s Creek.

“We feel that the blasting video is as close to a smoking gun as you can get for a fugitive dust violation,” explained Haltom. But when Coal River Mountain Watch provided this evidence to the WVDEP and filed a citizen’s complaint, the agency challenged the video’s authenticity and took no enforcement action against Republic.

In an email, WVDEP Acting Communications Director Terry Fletcher defended the agency’s actions, stating, “The inspector [of Haltom’s complaint] was not able to validate that the dust cloud in the video was caused by blasting at the Middle Ridge site, nor was he able to verify that a dust cloud traveled two miles to the areas of McDowell Branch Hollow and Workman’s Creek Hollow.” When asked what else could have produced such a dust cloud, Fletcher referred back to the complaint investigation, and stated that the agency has no further comment.

Commenting on the WVDEP’s dismissal of Coal River Mountain Watch’s video, Haltom said via email, “We’ve been gaslit so much, we have a gas-scented tan.”

Coal River Mountain isn’t the only area in West Virginia facing new mountaintop removal and other forms of strip mining. Between 2018 and 2020, WVDEP issued permits for 20 new surface mines across the state’s southern counties, covering a combined 9,016 acres, or a little over 14 square miles, according to an Appalachian Voices analysis of permit and GIS data accessible on WVDEP’s website.

This comes at a time when it is increasingly common for coal companies to use bankruptcy and the threat of permit abandonment as a strategy to shirk reclamation and other long-term environmental compliance obligations. This situation means that it is uncertain whether coal companies will be able to fulfill their cleanup responsibilities for hundreds of unreclaimed mines. If these companies forfeit their reclamation bonds and those bonds are insufficient, billions of dollars in mine cleanup liabilities could fall in the lap of the very agencies that continue to approve permits for new mining operations.

According to Rebecca Shelton of Kentucky-based Appalachian Citizens Law Center, bankruptcy laws that shield coal companies from environmental obligations are only part of the problem. Shelton also points to a history of regulators accepting inadequate reclamation bonds when issuing permits, and then allowing companies to maintain their permits without actively mining or reclaiming disturbed areas, as other factors that have contributed to a situation where neither coal companies nor state mining agencies are equipped to reclaim many current mining permits.

“The big issue,” says Shelton, “is that the system of regulation and enforcement was set-up to regulate an existing and robust industry, not to oversee and manage its precipitous decline and closure through bankruptcy.”

One scenario illustrating this problem came to light in March of last year when the WVDEP asked a judge to place the failing coal company ERP Environmental Fund in receivership after the company had accrued more than 160 environmental violations, laid off almost all its employees, and stopped managing its mine sites altogether. (Receivership is a legal maneuver akin to one party filing bankruptcy on behalf of another.) At that time, WVDEP’s Harold Ward disclosed that ERP’s environmental liabilities were large enough to “overwhelm” West Virginia’s entire special reclamation fund, the financial backstop in place to ensure that the state can clean up mines when coal companies fail to do so.

Asked if the WVDEP takes the apparent inadequacy of the special reclamation fund into account when considering new permit applications,Terry Fletcher explained via email that the state is “obligated” to issue a mining permit to any applicant who meets the legal requirements, adding, “The state’s special reclamation fund is governed by statutes and regulations which are separate from those associated with permit issuances.”

The dual threats of new mining, and a looming wave of abandoned permits leaves environmentalists fighting on two fronts. Coal River Mountain Watch is currently circulating a petition imploring the DEP to deny Republic Energy’s Turkey Foot mine application, arguing that Republic’s existing operations routinely violate legal standards, and the proposed mine will be no different. Meanwhile, Appalachian Citizens Law Center is at the center of regional and national coalitions working to ensure that mining companies aren’t allowed to walk away from unreclaimed mines. Appalachian Voices, the publisher of The Appalachian Voice, has officially opposed the Turkey Foot mine permit application and is also working to address problems with the reclamation system.