The Straight Fork mine has a history of noncompliance with conditions of its mining permit, resulting in fines and other enforcement actions 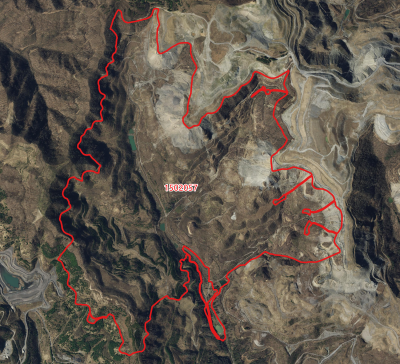 Updated Jan. 20, 2022: On Jan. 13, Virginia Energy sent a letter to A&G Coal Corporation suspending the permit for the Straight Fork Surface Mine after the corporation failed to respond to the Dec. 8, 2021 show cause order. The permit suspension gives the Justice company until Feb. 14 to deal with the ongoing violations. Failure to do so will then trigger permit revocation and a determination of bond forfeiture.

A state mining agency’s determination of bond forfeiture typically means that either the state will use the company’s posted bond funds to clean up the site or the coal company’s third-party surety will hold onto the bond funds and complete reclamation themselves.

This mine is self-bonded, meaning that there is no actual financial backstop to ensure reclamation, just a promise on the part of the company that it will produce the bonded amount of $4.7 million if asked to by the state. Based on A&G’s long history of rebuking regulators, and on Virginia Energy’s years-long practice of revising compliance schedules which A&G repeatedly fails to abide by, we feel it is unlikely that the state will actually follow through on collecting this money.

If past is prologue, more likely scenarios would be for the company to eventually address these violations along whatever timeline it sees fit, or for the state to fold these chronically unabated violations into yet another long-term compliance agreement (which A&G is likely to violate, and the state is then likely to revise. Lather, rinse, repeat).

On Dec. 6, regulators in Virginia affirmed fines of $22,500 levied against A&G Coal Corporation for violations on the Straight Fork Surface Mine in Wise County. The Virginia Department of Energy, formerly the Virginia Department of Mines, Minerals and Energy, has also confirmed that they will now issue a show cause order against the company, which is the last step in enforcement prior to the agency’s revocation of a mining permit and forfeiture of that permit’s bond.

The Straight Fork mine has a history of noncompliance, with regulators temporarily revoking the mining permit in March 2020, after A&G failed to comply with certain administrative requirements or pay associated fines and penalties over a 6-month period. West Virginia Gov. Jim Justice is the majority owner of A&G, with his two adult children holding minority stakes in the company.

The fines that were upheld by Virginia Energy on Dec. 6 stem from A&G’s failure to clean out five sediment ponds that had become too full of sediment to function properly on the 1,800-acre mountaintop removal mine as of a routine inspection on June 7. Federal and state laws require mining companies to construct ditches, ponds and other structures to mitigate potential run-off damage to nearby streams and land, and to protect communities from flash floods when mines are hit by heavy rain.

At the request of A&G, the initial July 7 deadline for corrective measures was extended twice with a final deadline of Sept. 7. The Justice company missed this deadline as well, which caused Virginia regulators to issue a cessation order on Sept. 10. If mining activities had been ongoing, this order would have halted coal extraction until the company corrected the violation. But as the mine was already idle, the cessation order instead functioned only as an escalated enforcement action, moving the permit one step closer to being revoked by the state.

The fines associated with the cessation order were affirmed on Dec. 6. Appalachian Voices was informed of the agency’s decision to issue a show cause order on Dec. 7.

Representatives of A&G and Virginia Energy held a tele-conference on Nov. 10 to discuss the sediment issues on the Straight Fork mine and the associated fines. This was open to the public, and an Appalachian Voices representative also participated in that call as part of our ongoing efforts to track violations and regulatory actions on Justice family mines. During the tele-conference, Jason Little, representing A&G, stated that the initial notice of violation had never made its way to the individual overseeing all “special projects, reclamation…, violations…, [and] remedial measures,” for the company’s mines within the state of Virginia, whom he identified as Bill Johnson.

“The company’s got so large,” said Little. “There’s so many permits, [and] not enough people and equipment, but we’re getting there. Hopefully going forward, everything should come to this office now, and if we’re aware of it, nothing should ever go to a [cessation order].”

In response, Virginia Energy’s Rick Altizer prompted Little to confirm that these official communications had in fact been sent to the correct address. As an additional measure, Altizer volunteered to personally notify Johnson of future violations as they are issued — a measure that is above and beyond what the law requires of the agency.

A&G has 30 days from receipt of the state’s Dec. 6 determination to pay the fines. They may also choose to request a formal hearing to contest the agency’s decision within that 30-day window. A&G could still avert permit revocation by dredging out the over-full ponds and performing other necessary remedial work on the permit, even though it’s now six months since the initial violations were noted. This has been the approach of Justice companies on this and other mines in the past: allow violations to go unabated until permit revocation is underway, only then to deploy the equipment and workers needed to fix the underlying problems.

A&G is one of the most problematic coal companies in the state of Virginia, but this pattern of non-compliance is not unlike the track record of other mining companies owned and operated by Justice and/ or his adult children. Since 2014, Virginia regulators have negotiated and renegotiated a series of compliance agreements with the company, but A&G continues to miss compliance deadlines and rack up new violations. The Kentucky Energy and Environment Cabinet recently moved to revoke permits, seize bonds, and collect a $2.9 million fine from Jim Justice and his son Jay Justice, after they failed to abide by the terms of a similar compliance agreement between several Justice companies and the state of Kentucky.