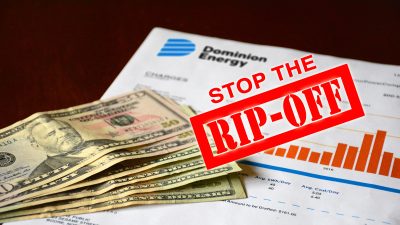 When in session, the Virginia General Assembly moves at a dizzying speed, with legislators considering thousands of bills and amendments in a matter of 60 days. The rapid-fire pace is particularly intense this year, due to some new power dynamics.

In January, Dominion Energy put forth a massive legislative overhaul to change how electricity rates are set. But in a historic shift from the utility’s usual omnipotence in the political sphere, the proposal has been met with significant resistance.

The motives of the company behind the unneeded fracked-gas Atlantic Coast Pipeline, which would commandeer the land of countless families, have always been suspect, but Virginians are now more skeptical than ever.

As a result, Dominion has been changing its bill up to several times a week, each time a new attempt to cajole lawmakers into allowing the legislation to advance to the governor’s desk, despite provisions that would strip regulatory oversight of the monopoly and put customers on the hook for billions of dollars in unnecessary charges in years to come.

Both the House of Delegates and Senate are slated to cast their final votes on this bill this coming week. And the problems remaining in the latest draft are enormous.

What’s clear is that this bill should not be passed as written. Many lawmakers have worked diligently to improve it, but their work is not done. Fortunately, there are solutions. Delegate Sam Rasoul has put forward a substitute bill. It starts with a “clean” repeal of the “rate freeze,” allowing the SCC to immediately commence reviewing electricity rates every two years. Del. Rasoul’s substitute also includes the provisions from Dominion’s bill that various citizens’ groups support, including mandatory energy efficiency investments, and declarations that 5,000 megawatts of new solar and wind are in the public interest.

Dominion’s bill is dense and complicated but it didn’t have to be. The “rate freeze” should simply have been repealed, restoring full authority to the SCC over monopoly utilities. Policies that advance renewable energy, energy efficiency, and grid modernization are crucial, but because they are inherently good policies, the General Assembly should approve them on their own merit. Instead, Dominion is using them to cover up a massive repeal of SCC authority so that monopolies can operate not only without competition, but also without basic regulatory safeguards.

Now, in the final stretch, it is crucial that you contact your elected officials and voice your concerns.