The tale of two families faced with undrinkable water 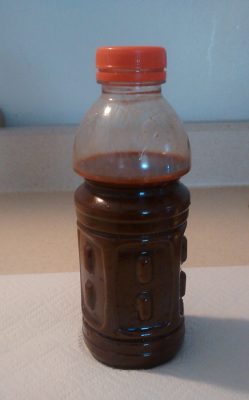 A plastic bottle filled with Melissa and Chauncy Easterling’s tap water. Photo courtesy of the Easterlings

Melissa and Chauncy Easterling first discovered that something was wrong with the well water that fed their Jolo, W.Va., home in late 2016. Neither they nor their local health department could pinpoint the cause.

“It had a real strong odor to it, and then it started looking kind of red, like it was rusty,” Melissa says. “Like sewage and rotten eggs put together. It would literally knock you off your feet.”

The U.S. Centers for Disease Control and Prevention states that “over 15 million U.S. households obtain their drinking water from private wells.” These are not protected by the federal Safe Drinking Water Act, which regulates public drinking water.

A 2009 U.S. Geological Survey study of 2,167 private domestic wells across the country found that roughly one in five had at least one contaminant at a potentially unsafe level. Most states, including West Virginia, do not regulate well water quality after the well’s construction, according to nonprofit organization The National Groundwater Association. This leaves the responsibility of well maintenance and treatment up to the well owner.

While it is generally recommended for well owners to have their water tested annually, state-certified lab tests cost hundreds of dollars. The Easterlings hadn’t had their well tested since it was built around 15 years ago.

When their well went bad, the Easterlings reached out to Appalachian Water Watch, a program that tracks water pollution run by nonprofit organization Appalachian Voices, the publisher of this newspaper. Appalachian Water Watch tested the well and found several contaminants, including lead, at levels above the U.S. Environmental Protection Agency’s non-enforceable public health goals. Lead was also found in one of their neighbor’s wells.

The family still doesn’t know what exactly caused the sole water source for their home to turn sour — but they have a strong feeling the culprit is one of the many old coal mines or gas wells dotting the ridge where they live.

Chauncy is particularly suspicious of one coal mine just 70 feet below their well’s deepest point. It’s been sealed off for years, but he recently spotted discharge coming out of one of the mine’s wellheads that he plans to get tested soon.

“It’s got this reddish-white gunk it’s puking up onto the ground,” Chauncy says. “I’m really not sure what it is, but it’s also spilling into the main creek down there.”

A few weeks before their tap water began to change color, Melissa’s father suddenly passed away from kidney failure at 69.

While the Easterlings cannot say for sure if the well contamination directly led to his death, Chauncy suspects that it contributed. Two of the pollutants detected in the Easterlings’ well, lead and copper, have been shown by the EPA to cause kidney damage. 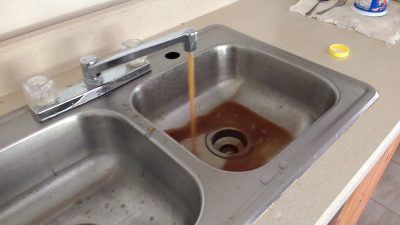 What comes out of the Easterlings’ kitchen faucet is so toxic, they were told they shouldn’t even touch it — let alone drink it. Photo by Willie Dodson

“It was a shock to me, because he was just as healthy as an ox, I thought,” Chauncy says. “He’d get up and chop firewood, he’d get out in the yard and play with that little boy of ours. It was unreal.”


The Easterlings’ public service district has nearly completed a plan to extend municipal water to their part of the county, but it lacks funding to complete the project. The family is trying to raise awareness about the lead in their water to both make it a higher priority and help assist the district’s case for obtaining federal grants.

Until then, a 5,800-gallon rainwater tank is their primary source of water.

“And tanks ain’t cheap,” Chauncy says. “What I paid for that tank, I could’ve bought 10 years of water off of the water company.”

He characterizes his family’s situation as “a constant battle.” Since their water supply is dependent on rainwater, rationing is a must. On top of that, the water in their tank can start to grow algae and bacteria if it sits too long. They often have to buy extra water too, spending $50 to $100 a month depending on the amount of rain.

“By the time we’ve washed clothes, taken baths, flushed the commode — I’d say we go through about 1,500 gallons to 6,000 gallons, maybe, a month,” he says. “It just depends on what you got to do. We try to wash clothes when it rains now.”

Jane, whose name has been changed out of concern for her husband’s coal mining job, had to install a filter on her Pike County, Ky., well in 1989 after the taps started to run red. Like the Easterlings, Jane and her husband live in an area surrounded by old coal mines and gas wells — meaning if the pollution originated from one of these sites, it would be very difficult to determine which one.

According to Jane’s daughter Kandace, the area’s water quality has gotten progressively worse since 1989.

“It used to be one of my favorite things was to stand by the creek with my kids and watch crawdads, and we’ve not had crawdads in I’d say probably three or four years,” Kandace says.

Kentucky is another state that does not monitor or regulate the water quality of private wells. And according to Kandace, hooking up to municipal water is not an option, as not enough people live in their area to extend the line.

When Jane upgraded her filter recently, she had to pay $200 for its installation. She also pays $45 monthly for a technician to come change it.

Even with the filter installed, the family boils the tap water before cooking with it and uses bottled water for drinking and making ice. Orange stains in bathtubs, sinks, dishes and laundry are commonplace in their home.

“It’s hard to get that stuff out,” says Kandace. “You feel like you’re always cleaning. … My sister has blonde hair, she has to get it fixed all the time because it was coloring her hair orange. There’s a lot of things that we deal with, that other people don’t have to deal with.”

Regardless of the problems with their water, Kandace doesn’t see how her parents could move out of the house her grandparents built with their own hands even if they wanted to.

“I just can’t imagine any way financially they could move,” she says. “And mama said she don’t have any intentions, all her family is here. All the whole holler is here. And her cemetery, my papaw’s grave. It’s a nest egg, your land is your investment. Your house is an investment. And it will go on to the other generation.”

If you suspect your well has been impacted by coal or gas infrastructure, you can message Appalachian Water Watch on Facebook or call them toll-free at 1-855-7WATERS.