Jan. 11 marked the 1,000th day that hundreds of North Carolinians living near Duke Energy’s coal ash basins have lived on bottled water. Affected residents spoke at press conferences in Raleigh and Charlotte that day along with lawmakers and representatives from environmental groups, including Appalachian Voices, the publisher of this newspaper. 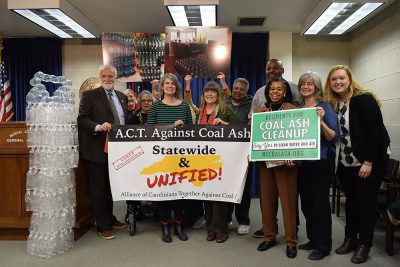 Members of ACT Against Coal Ash stand with legislators and allies after the press conference in Raleigh. Photo by Kevin Ridder

According to Caroline Armijo with Stokes County Residents for Coal Ash Cleanup, families have learned some uncomfortable realities after being on bottled water for nearly three years.

State Rep. John Autry took the podium to call out his colleagues in the General Assembly.

“I urge the leadership in the legislature and the [N.C. Department of Environmental Quality] to demand that Duke Energy remove all of its coal ash from unlined pits and safely recycle it or dispose of it aboveground on Duke’s property,” he said.

Duke Energy spokesman Jeff Brooks, however, states that the coal ash ponds did not contaminate the well water.

“We’ve not seen to this point a connection between Duke Energy’s operations and the findings in their wells,” Brooks says. “But we’ve worked from the beginning to try to address [residents’] concerns and provide peace of mind.”

Under North Carolina law, Duke has until October 2018 to install permanent water supplies for residents within a half-mile radius of coal ash basins near 10 of the utility’s power plants in the state. According to a Duke press release, affected residents near public water supplies have the option of being connected to municipal water or having a well filtration system installed, while those in more remote areas will only have the filtration option.

But Duke won’t be providing a permanent water supply for people like Roger Hollis, who lives just outside the half-mile radius of a Cleveland County, N.C., coal ash basin and has a contaminated well. 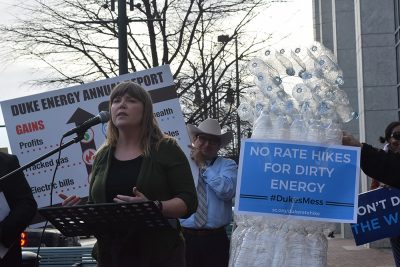 “I’m assuming that the money is the problem,” Hollis said at the press conference outside Duke’s Charlotte headquarters. “But with [$22.74 billion] in revenue and Duke Energy CEO Lynn Good making over $13 million a year salary, with a $2.6 million bonus just a couple years ago, why can’t our small community get drinking water?”

The N.C. Utilities Commission is currently deciding whether to approve a 16.7 percent rate increase for residential customers of Duke Energy Progress and Duke Energy Carolinas. If approved, a portion would fund the cleanup of Duke’s unlined coal ash basins.

“We are definitely in favor of seeing Duke Energy pay for its negligence in regards to its coal ash waste disposal,” Luis Rodriguez with the Sierra Club said in Charlotte. “And we definitely want to make sure that Duke does not pass the cost of this off to ratepayers in the form of rate hikes.”

According to Rep. Autry, legislative action is needed.

“I think the ultimate solution is to make sure that [the General Assembly] properly funds the Department of Environmental Quality and the Department of Health and Human Services to deal with those issues,” he said.

“It’s time for two things to happen,” Appalachian Voices’ N.C. Program Manager Amy Adams said at the Charlotte event. “One, to make sure the corporations who make money and reside in our state are doing the right thing by the citizens who live here. Secondly, it’s time for the state of North Carolina to set groundwater standards that are protective of human health for all 3.5 million North Carolinians who rely on groundwater.”