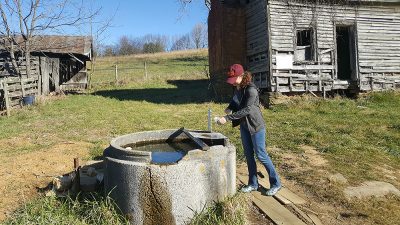 Leigh-Anne Krometis, associate professor in Virginia Tech’s Department of Biological Systems Engineering, began studying the use of Appalachian roadside springs for drinking water in 2016 to determine whether they could be a public health risk.

Krometis studied how often and why people collect drinking water from 19 springs across five states: West Virginia, Kentucky, Virginia, Tennessee and North Carolina. Her research suggests that an average of five people collect water from each spring daily. Krometis left short surveys with pre-addressed envelopes for visitors at six locations. Of survey respondents, 88 percent collect spring water specifically for drinking, with 65 percent stating that taste is a primary motivator. Although 64 percent of respondents use well water in their home, they stated that they do not trust its quality.

Krometis’ samples of these springs were all positive for coliform bacteria, which indicate that disease-causing organisms could be present, and E.coli was found at over half. Some E. coli bacteria can cause severe diarrhea, vomiting and abdominal cramps.

NC Among 41 States Grappling with Trihalomethanes

In June 2017, Duke Energy withdrew its request to add bromides to several of the scrubbers at its North Carolina coal-fired power plants due to a related 2015 spike in Charlotte drinking water contamination. This follows a June 2017 lawsuit filed by environmental groups that challenged Duke’s request due to the cancer-causing nature of bromides.

North Carolina coal ash basins have also violated their Clean Water Act permits by allowing bromides to flow into surface and groundwater, according to lawyers for the Southern Environmental Law Center. This contamination in North Carolina is an indirect result of a 2002 state law that limited air pollution from coal-fired power plants. To reduce air emissions, Duke Energy installed scrubbers, which resulted in wastewaters containing bromide.

Trihalomethanes are an unhealthy byproduct that can form during the water treatment process, including when bromides interact with chlorine. If consumed in sufficient quantities over time, these chemicals may adversely affect the central nervous system and cause cancer as well as kidney or liver problems, according to the U.S. Environmental Protection Agency.

After scrubbers were installed at the Belews Creek power plant in 2008, trihalomethanes started showing up in the drinking water of nearby Madison and Eden, N.C., according to the Winston-Salem Journal. By March 2017, Madison and Eden had spent roughly $1 million and $2 million, respectively, on systems to better deal with trihalomethanes, although the concern remains.

A lawsuit filed in December 2017 charges that operations at the Belews Creek power plant have contaminated groundwater and local waterways with elevated levels of many pollutants, including bromides.

Residents and businesses affected by the January 2014 Freedom Industries chemical spill have until Feb. 21, 2018, to file settlement claims as part of a class action lawsuit, pending final court approval of the arrangement.

The industrial chemical, 4-methylcyclohexane methanol, also known as MCHM, spilled into the Elk River just upstream of the Kanawha Valley Water Treatment Plant in Charleston, W.Va., after leaking from a storage tank.

According to the American Conference of Governmental Industrial Hygienists, prolonged exposure to high concentrations of MCHM can cause headaches, difficulty breathing and eye and skin irritation. As a result, residents had to rely on bottled water.

If the settlement receives final approval, it will be paid by West Virginia American Water and MHCM manufacturer Eastman Chemical, although the companies deny liability and blame the now-bankrupt Freedom Industries for the spill.

The class action lawsuit covers anyone who received tap water from the Elk River intake plant and any hourly worker whose employer closed due to the water contamination. The incident affected 231,000 residents and businesses.

The resulting $151 million settlement allows households to file a simple claim form and obtain $550 in compensation for the first resident and $180 for each additional resident. Separate claims can also be submitted with more detailed information regarding losses for residents, pregnant women, businesses and organizations.

As of December 2017, nearly 38,000 compensation claims had been filed, primarily by residents. Claims can be submitted at wvwaterclaims.com/claim-forms or by calling 1-855-829-8121.

In response to concerns about contaminated drinking water, on Jan. 11, the North Carolina General Assembly reviewed House Bill 189, which would reappropriate $1.2 million for state and federal agencies to study the chemical GenX.

The health effects of GenX are unknown, but it became a public issue when the results of a study that began in 2013 were published in June 2017 on the front page of the Wilmington Star. North Carolina State University researchers found over 600 parts per trillion of GenX in the Wilmington area’s drinking water. The non-enforceable state health goal of 140 parts per trillion was established in July 2017.

Chemical company DuPont, and later their spin-off company Chemours, have legally discharged chemicals into North Carolina’s Cape Fear River for years under a state wastewater permit. About a quarter million residents from Fayetteville to Wilmington rely on this river for drinking water. According to PBS, the Cape Fear Public Utility Authority does not filter out GenX because there are no state or federal regulations for the chemical.

Since Sept. 13, 115 wells tested near Chemours’ Fayetteville Works facility have had GenX levels above 140 parts per trillion. Subsequently, affected residents have been receiving bottled water from the company.

Additionally, a 2017 study found chemicals related to GenX in Jordan Lake, which provides the drinking water for the Triangle.
DuPont began using GenX in 2009 to replace another fluorinated compound, perfluorooctanoic acid, due to health concerns. GenX is chemically similar to PFOA. It is classified as an emerging contaminant, which means the U.S. Environmental Protection Agency has identified the need to evaluate and possibly regulate the pollutant, but there is no firm timeline for a study and no guarantee that any rules will be established.

After an unreported October spill of dimer acid flouride, which breaks down into GenX in the water, the Wilmington utility filed a lawsuit against Chemours and DuPont. Similarly, North Carolina has sued the companies for lack of transparency and moved to suspend the company’s discharge permit.