Trash Trouts are Collecting Litter and Data on Waterway Pollution 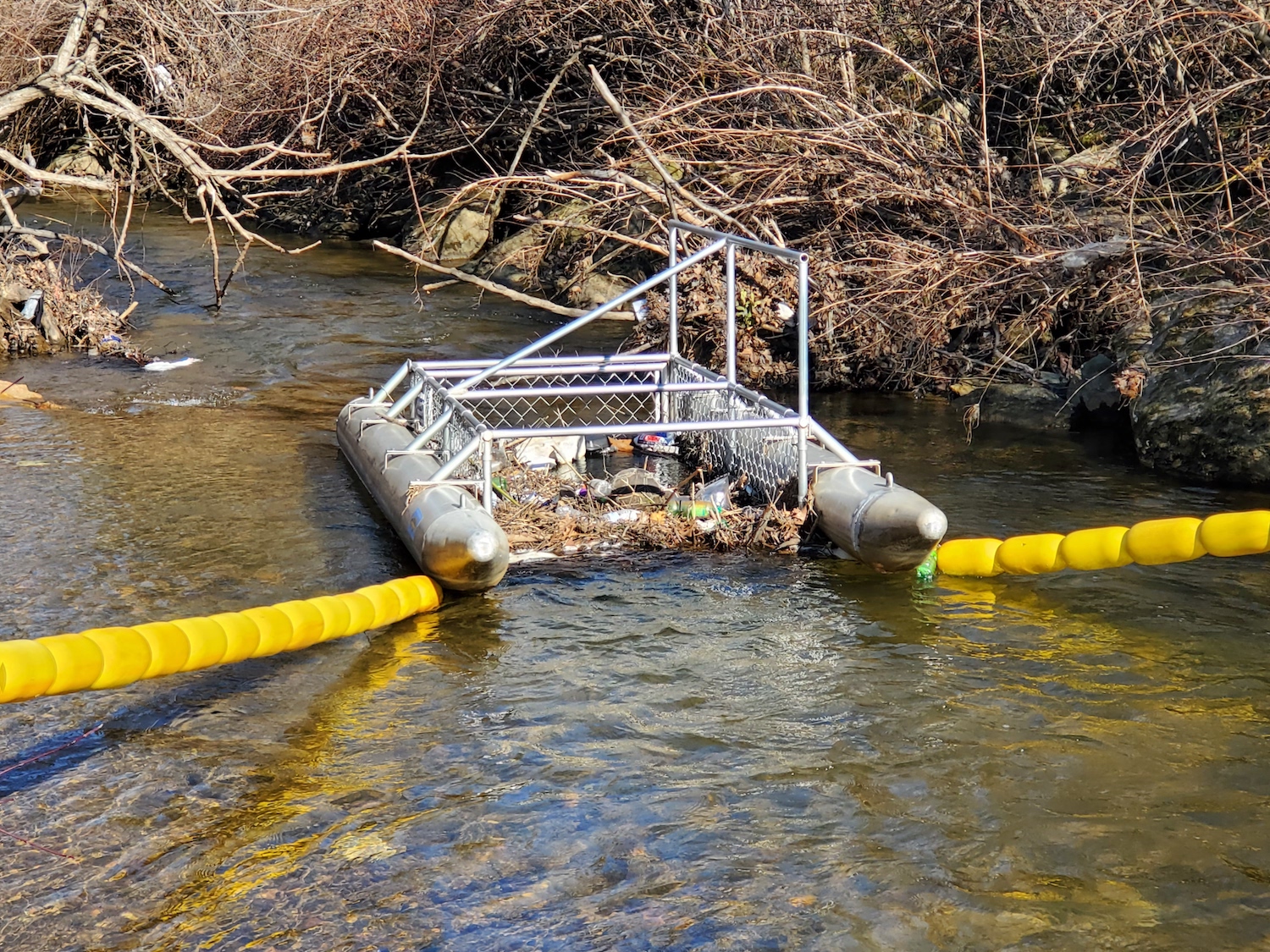 Starting with an old pontoon boat and a desire to clean up local waterways, a North Carolina environmental nonprofit designed a passive litter collection system that is now floating in dozens of waterways, constantly catching garbage.

The floating device, known as the trash trout, uses waterflow to capture man-made trash before it reaches main waterways. Asheville GreenWorks began designing the trash trout in 2015 and installed the first one in 2017. Director of Operations Eric Bradford estimates the first trap, located in Hendersonville, North Carolina, has prevented nearly 7,000 pounds of plastic water bottles alone from entering major waterways since its installation.

Environmental groups and municipalities across four different states have partnered with Asheville GreenWorks to install a total of 30 trash trouts since the first trap hit the water five years ago, according to Bradford. The majority of these trash collecting systems can be found in North Carolina, though they’ve also been installed in Tennessee, South Carolina and Missouri with one planned to be installed in Michigan this summer. 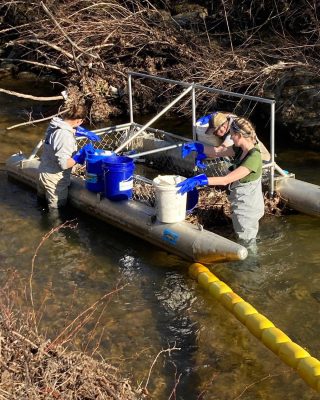 Asheville GreenWorks has been cleaning out waterways in the Asheville area since it was established as an environmental nonprofit organization in 1973. Because of the organization’s experience, Bradford says they were already aware that an overwhelming majority of the trash was coming from stormwater runoff.

“All that man-made litter starts off on the side of the road and then makes its way into our systems,” Bradford says. “We were trying to come up with something that would intentionally capture trash in smaller waterways, smaller tributaries, and keep it from reaching the river.”

The trash trout floats above the water using pontoon booms connected to a floating mesh gate with openings to ensure smaller wildlife don’t get stuck. Four connection points with ground anchors and posts keep the trap stabilized and connected to the banks.

There are two versions of the trash trout. The larger one has wider connection points to withstand higher flow rates in bigger waterways. The second, known as the Trash Trout Jr., is mostly used for smaller urban tributaries and is easier to move in and out of waterways during high-intensity flooding events or to conduct research on water pollution.

When determining the ideal location for a trap, Bradford says requirements include an easily accessible, visible area, a tributary no wider than 15 feet, and an urban waterway in an area with prevalent roadside pollution.

“We also want visibility too because I want this thing to be a point of advocacy,” Bradford says. “We say this often to people — that the trap is not the fix to the problem, this is the starter of the conversation.” 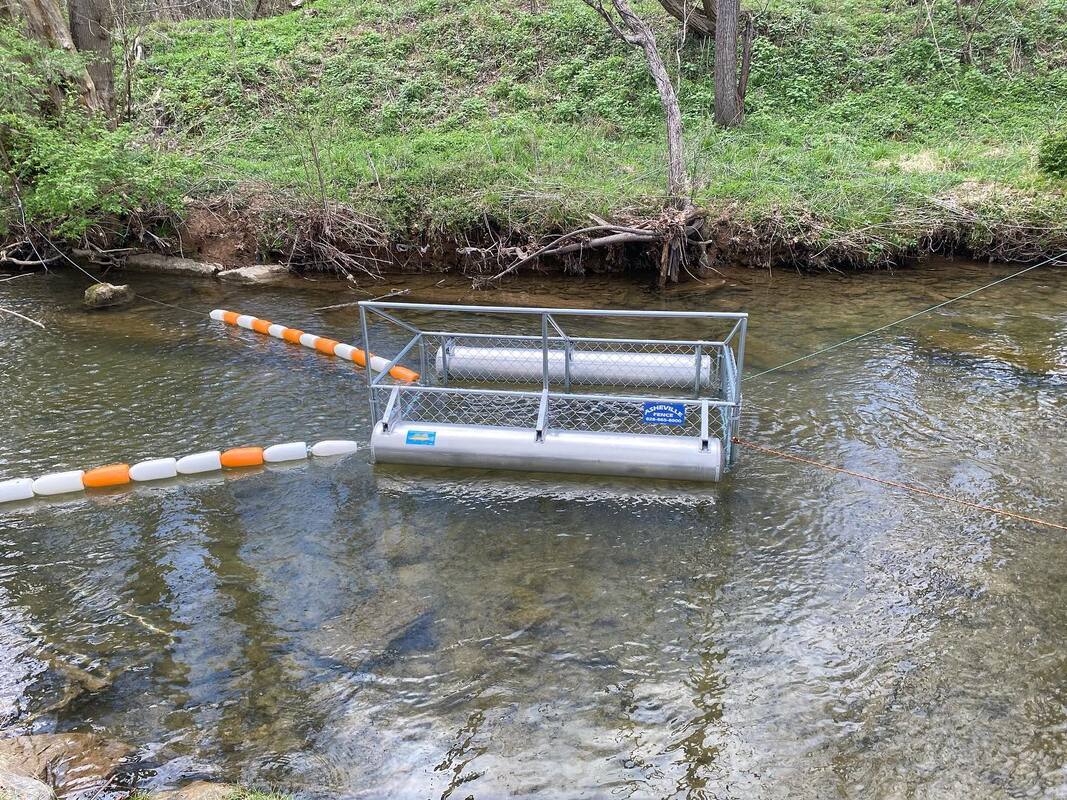 One of the trash trouts installed by Hannah Woodburn and Andy Hill sits in Buffalo Creek in Elizabethton, Tenn. Photo courtesy of Asheville GreenWorks.

Depending on the location, Bradford says they will either partner with a municipality or a non-governmental environmental organization who would be responsible for maintaining the device. The traps are cleaned out once a month or after a heavy rainfall. When cleaning the device, the agency responsible for the trap can collect data on the type of trash entering their waterways.

The trash trout’s double use as a tool for education and advocacy is precisely the reason why Watauga Riverkeeper Andy Hill and High Country Watershed Coordinator Hannah Woodburn wanted these systems in their local waterways.

“By having the public aware we can fight for more laws and regulations regarding plastic and ultimately protect our streams and human health,” Woodburn says. “It’s important to become more conscious of the waste we’re using and what our choices are as consumers.”

Hill and Woodburn helped install traps in Winkler’s Creek, a tributary of the Middle Fork of the New River located near Boone, North Carolina. They’ve also installed two more in Tennessee in the Doe River in Roan Mountain and Buffalo Creek in Elizabethtown, which are tributaries of the Watauga River.

The systems are designed to capture macroplastics, such as plastic bags, styrofoam cups, single-use straws and other trash items. With time, light breaks down these plastics into smaller pieces known as microplastics.

“These are invisible to the naked eye, but under the microscope you can see there’s also concern for the ecosystem because these microplastics tend to bioaccumulate as they move up the food chain,” Hill says. “So collecting data on both the micro and macroplastic as an awareness tool is the main goal.”

The Winkler’s Creek location was the first trash trout Hill and Woodburn installed and it has collected a year’s worth of data so far. Additionally, trash trouts across North Carolina are being utilized to conduct a microplastics study funded by the state’s Environmental Enhancement Grant Program.

The grant will fund the installation of 15 trash trouts across North Carolina with the help of riverkeepers, individuals who work with Waterkeepers Alliance to maintain waterways and monitor freshwater pollution in their area. According to Hill, the data he and other riverkeepers in the state have collected so far with the use of trash trouts has been troubling.

“Unfortunately, what I can tell you is that we’ve found microplastics in every sample we’ve taken in every watershed in the state,” Hill said. “And then we do monthly sampling here, so every single sample, every week, every month for an entire year we found surface water microplastics, and that’s from the top of Grandfather [Mountain] all the way to Watauga Lake in the Watauga Basin and in every sample throughout the New River Basin from its tributaries to the main stem.” 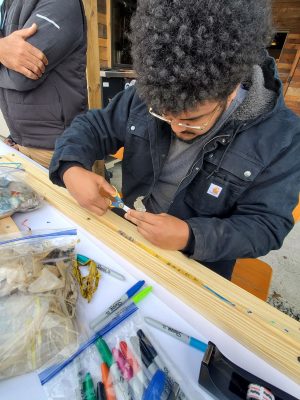 Boone-based filmmaker Tom Hansell is also using trash trouts to raise awareness about freshwater pollution through the creation of The Trash Trout Motion Picture Show. After helping clean out the traps in Boone this past spring, Hansell offered free workshops for residents to create short films with the collected trash. These are then projected onto a large screen for public viewing.

“It has to do with connecting to the sources that sustain us,” Hansell says. “A lot of times people will spend time in the river, tubing or kayaking, swimming or fishing, which are all good things, but a lot of times you can kind of learn to overlook some of those plastic bags or kind of other ways that humans are making a lasting impact on the river. I think by taking the plastic out of the river and projecting it up onto a big screen, that really starts to raise awareness.”

The current versions of the trash trout are only the first, according to Bradford. Asheville GreenWorks is currently working with an engineering firm to design two more versions of the passive litter collecting system with improved longevity and a different gate system to make the trap easier to clean out.

“We’re always innovating with what we’re doing here,” Bradford says. “We’ve learned a lot over the years about these traps and trying to figure out how to make the traps last longer in a lot of ways and build it with different materials.”