Solar car racing takes motorsport, a sport associated with mass burning of fossil fuels, and turns it into an engine to advance sustainable transportation.

Every year there are several major collegiate solar races in the United States, and some universities in Appalachia participate.

Schools entered in the races have to develop their own vehicles for endurance races within competition regulations. The vehicles are powered by electric motors fueled by a combination of solar panels and batteries.

Two of the major collegiate American races are the American Solar Challenge and the Formula Sun Grand Prix, which are organized by the Innovators Educational Foundation, a nonprofit group.

The American Solar Challenge is a cross-country race that ranges from 1,500 to 2,000 miles, and the Formula Sun Grand Prix is a three-day track race.

Appalachian State University’s Team Sunergy and their vehicle Apperion placed second out of 18 teams, behind the University of California, Berkeley, at the 2017 Formula Sun Grand Prix in July.

Cofounder and Project Director Dan Blakeley says the vehicle typically runs at about 45 mph on the track and can run entirely on solar power in optimal conditions. 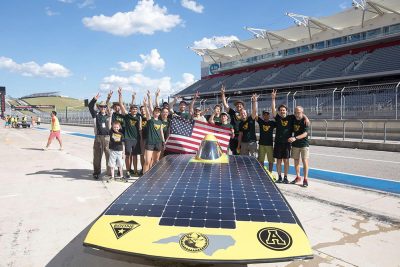 “I think there was, not a lot of direct pressure, but a bit of pressure to show it wasn’t a fluke,” Blakeley says.

Blakeley said if it were not for some reliability issues with the vehicle, the team likely would have been able to make up the laps they needed to finish first.

Team Sunergy was founded in fall of 2013. Blakeley says a solar car team is a perfect fit for Appalachian State given North Carolina’s reputation as the home of American racing and the university’s reputation for sustainable technology.

Apperion is being retired and replaced with a new vehicle that will compete in the newly created cruiser class, which requires the vehicles to carry two occupants instead of one. Three-wheeled vehicles like Apperion also will no longer meet regulation requirements in its class. 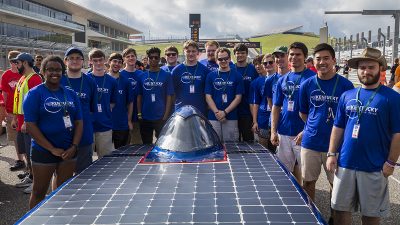 The team’s outgoing car, Gato del Sol V, is a three-wheeled vehicle that, like the one at Appalachian State, will be replaced with a new four-wheeled car. The car runs at about 35 mph on the track.


Monon Rahman, the team’s media lead, says that when the team started working on Gato del Sol V in 2014, they had to relearn building a solar vehicle from scratch, due to the loss of key team members.

The team’s finish in the Formula Sun Grand Prix this year was its best.

Rahman said the addition of the more consumer-oriented cruiser vehicle class is pushing the competition designs toward being consumer-friendly.

“It’s probably going to take a little bit of time for solar cars to be a full consumer product, just because the technology is a little more expensive than what’s viable,” Rahman says. “That being said, the competition itself is kind of going in that direction.”