The Tale of Gray’s Lily 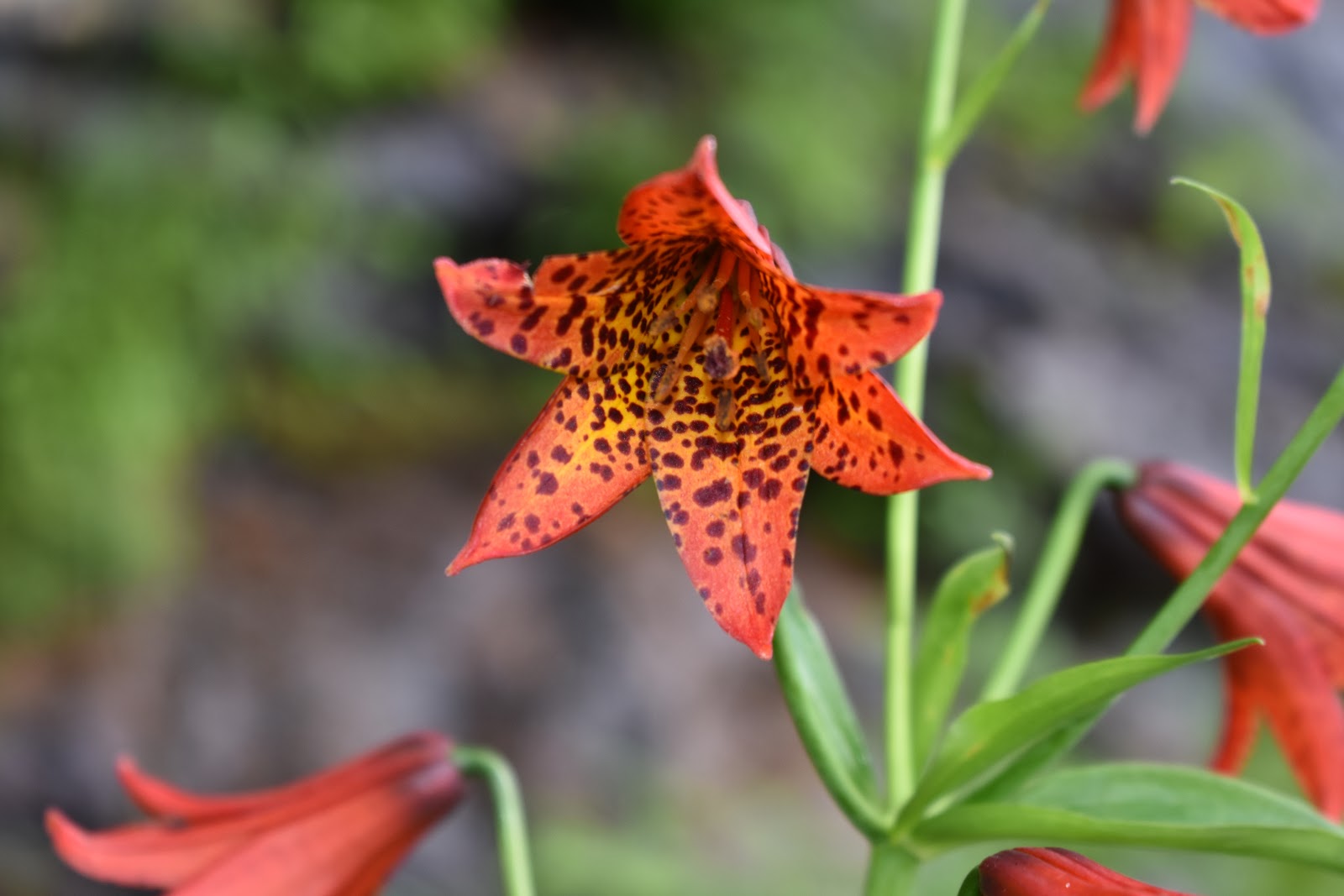 The vulnerable lily, which grows only in North Carolina, Virginia and Tennessee, is fortunate to be a species of particular interest at the Tater Hill Plant Preserve in Watauga County, North Carolina. Here nearly 1,600 acres of land, including a rare mountain bog, is devoted to the study and protection of rare and endangered plants.

Esteemed American botanist Asa Gray discovered his “nom de bloom” on Roan Mountain in 1840. “On the North Carolina side of Roan,” Matt Estep, associate professor of biology at Appalachian State, is quick to point out. He has served as the steward of Tater Hill since 2015 and is duly proud of the lily’s North Carolina heritage.

As steward of the preserve, Estep guides visitors through the sensitive terrain of Tater Hill. He is often accompanied by Ben Brewer, who began monitoring known populations of Gray’s lily and tracking its reproductive health as an undergraduate. Brewer came to Appalachian State in 2018. He took a lab with Estep and, enticed by the invitation to join the rarified ranks of “plant hunters,” quickly declared botany his field of study. He’s now writing his master’s thesis on Gray’s lily, an analysis of the results of the ongoing data collection.

Tater Hill has a handful of scheduled hikes that people can sign up for and small groups, usually fifteen people or less, can register for a tour any time Estep has availability. On May 10, 2020, I joined several friends on a small group hike on the preserve. Initially, it’s a humbling experience to take a nature walk with a biologist who specializes in genetics, and a botanist initiate. Common plant names are secondary in their domain, and it’s not long before a flurry of Latin is flying between Estep and Brewer, with occasional calls for confirmation of ID, for which Brewer consults his tattered copy of “Guide to Vascular Plants of the Blue Ridge” by B. Eugene Wofford.

Once the trek is earnestly underway, the floral Latin soon blends with other noises native to Tater Hill, and visitors are swept into the enthusiasm of identifying what they recognize. It’s early May, so not everything is blooming yet, but there are a number of flowers that are on the brink of blossoming, including a demure lady slipper.

In between exclamations of “Dicentra cucullaria!” (aka Dutchman’s breeches!) and “Jack-in-the-pulpit!” (or Arisaema triphyllum!), conversations veer from the sustainable method of harvesting ramps to the abundance of bluets (Houstonia caerulea), whose tiny blue petals and bright yellow centers seem to cluster indiscriminately, while its visual twin, Roan Mountain bluets (Houstonia montana) are endangered and can be glimpsed at Tater if you lay on your stomach and peer over a ledge jutting out from the cliff.

As we approach the grassy bald, we near two of the seven Gray’s lily plots that Brewer and Estep identified on Tater in 2019 to begin collecting the demographic data key to the preliminary research for Brewer’s undergraduate study. In addition to the two at the top of the bald, there are two other plots located halfway down the bald, and three more in the forest. An eighth plot closer to the bog was eventually added.

The two plots are full of Gray’s lilies, but this early in May they aren’t in bloom. As Brewer describes the function of the plots, and interrupts himself with botanical observations, it is obvious that he has fallen hard for his lovely lily. He waxes poetic about Gray’s cultural heritage and marvels that the entire existing population of the species is found within a 100-mile radius.

Two dominant threats to Gray’s lily are the fungus lily leaf spot (Pseudocercosporella inconspicua) and hungry deer, which both undermine the lily’s reproductive potential. Brewer is monitoring the effects of ongoing fungicide treatments at Tater Hill and the off-site populations in his study. And at Tater, where the persistence of the deer rival that of the fungus, a fence was built in 2020 with the assistance of a wildlife biology class from App State.

When asked how optimistic he is about the survival of Gray’s lily, Brewer admits that the results of his most recent data collection are grim. A primary goal of the research is to confirm that the populations of lilies are reproducing enough to replace themselves. He explains that the fruit of the flower is a capsule that contains about 200 seeds, on average, and in 2020 only 67 of the 225 lilies being monitored offsite produced capsules. And more distressing, at Tater Hill, only two lilies, both located in plots at the top of the bald, produced capsules.

While he admits to his concern, he also says that researchers know to expect that their data may reflect “random bad years,” an apt summary of 2020 as a whole. One challenge is that lily leaf spot is infectious, so the larger populations, which grow in close proximity to each other, are particularly vulnerable to the fungus. He thinks that the plant’s best chance to overcome the fungus is to introduce genetic resistance.

Brewer worries that the existence of larger populations might provide false reassurance on the overall health of the species. He points out that the majority of these lilies are old plants whose reproductive potential is naturally waning. He hopes that the next five-year review by the U.S. Fish and Wildlife Service will result in the federal status of Gray’s lily being classified as endangered, which would offer broader protection than North Carolina’s classification of the flower as a threatened species can provide.

Through Brewer’s efforts, Tater Hill Plant Preserve keeps track of known lilies on public lands, but it’s harder to know how many lilies may lurk unrecognized on private land, which is some cause for optimism given the preponderance of specific mountainous conditions suited to Gray’s lily. In ideal circumstances, it can potentially thrive in bogs, wet meadows, seeps, grassy balds and high elevation forests.

Estep encourages those with access to private property to keep an eye out for lilies in general and if anyone comes across a flower that resembles Gray’s lilies, he suggests that they upload a photo to iNaturalist (inaturalist.org) which can confirm identity and also provide invaluable data to researchers. Both Estep and Brewer would welcome news of any such discoveries.

Curious to know whether the lily might be cultivated on land assuming the conditions were suitable, I asked Estep if there were ethical channels through which seedlings or seeds could be obtained. He suggested that the best preliminary option would be to see if there are any existing Gray’s on the property in question and graciously offered to help in the search.

We scheduled an exploratory hike in late May and that Saturday, Matt Estep and his wife Sarah Estep, also a biologist, gamely arrived to help to scout for potential of Gray’s growing on 10 acres at the base of The Peak in Ashe County. Noticing the abundance of tulip poplars, birch and beech trees, as well as ferns, vining dutchman’s pipe, an impressive display of dwarf larkspur, as well as many clusters of lilies, Sarah Estep was quick to identify the land as a rich cove forest natural community, indicating a solid potential for the presence of Gray’s lily, but our subsequent search was conclusive only as a definite maybe.

May in the mountains usually swings with force between winter and spring temperatures, and then back again. The many lilies, far from blooming, were all incognito. It’s likely that most are the Turk’s cap lily (Lilium superbum), which so closely resembles Gray’s lily that it’s impossible to differentiate them until they are in bloom. 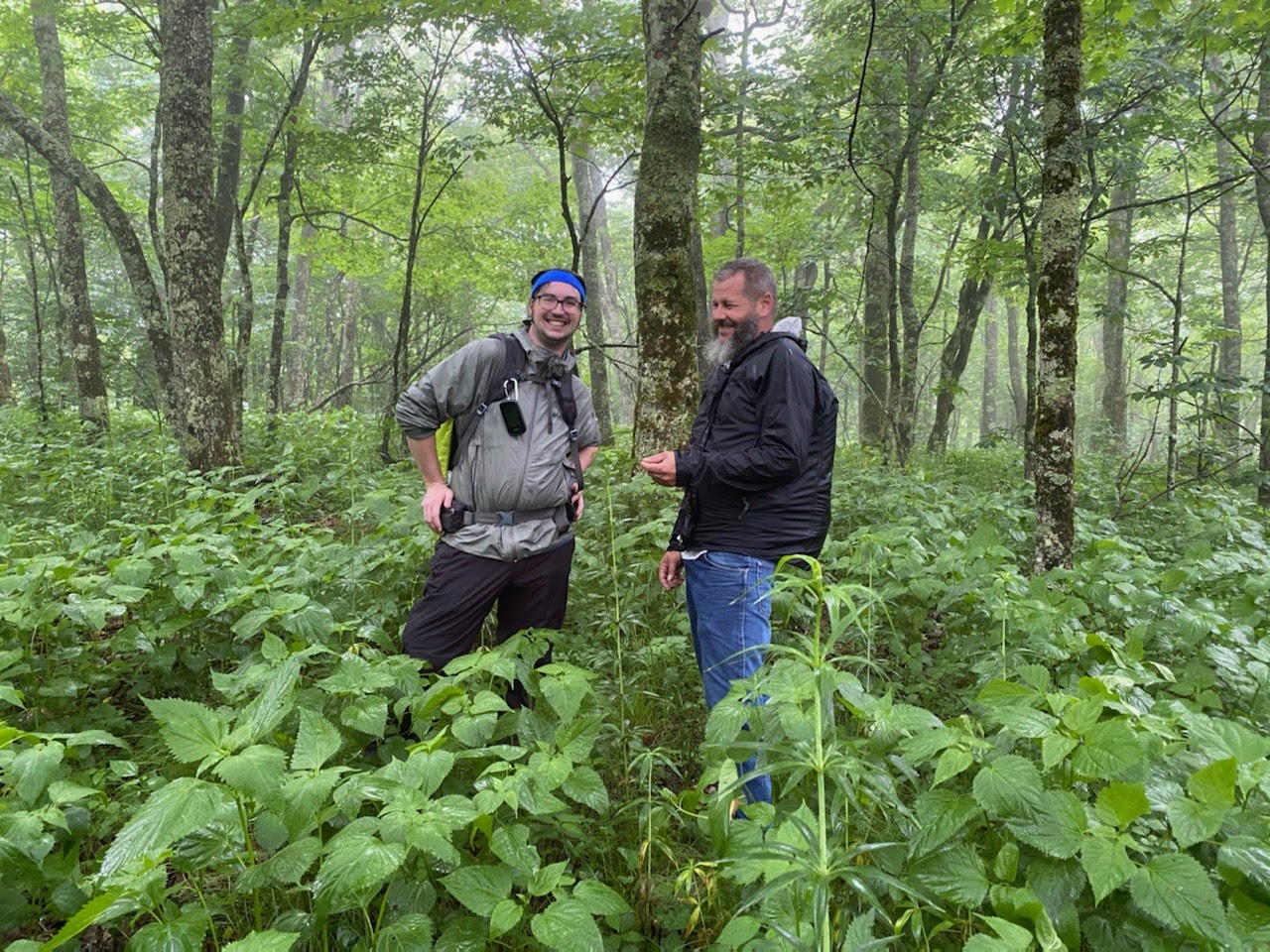 Waiting for the big reveal. Ben Brewer (left) and Matt Estep (right) Saturday, Jun 12, 2020, on top of Harmon Knob, the newest acquisition to Tater Hill, mid-argument as to whether this lily is a Turks cap, or not. Photo courtesy Ben Brewer

Two weeks into a wet June at the base of The Peak, the lilies remain firmly undifferentiated without a single visible blossom on what must be hundreds of plants. A handful, usually those along roads or trails, have been nipped in the bud by hungry deer, others, clustering under a heavy canopy of leaves, show no evidence of budding. They may lack the necessary sunlight and some flowers don’t bloom every year. Even with a reasonable probability that the 10 acres may house a Gray’s lily or two, it could take several years to confirm.

That there may be as of yet undiscovered (or unreported) pockets of Lillum grayi is one source of optimism regarding the fate of the flower. And it is without a doubt that Gray’s lily is in good hands under the care of scientists like Estep and Brewer, who share a passion for plants. Another cause for hope is the expansion of what began as “The Tater Hill Bog Preserve,” approximately 158 protected acres established in 2000 by the Trust for Public Land in conjunction with the High Country Conservancy, the N.C. Department of Agriculture and Human Services and Appalachian State University.

The 158 original acres have grown into an awe-inspiring 1,600 acres, which now encompass Rocky Knob, Rich Mountain and the newest addition, Harmon Knob. The evolution from a bog preserve to its current status as “Tater Hill Plant Preserve” was brought about by generous donations of land tracts from numerous donors, public and private, including those listed above as well as Friends of Plant Conservation, Blue Ridge Conservancy and The North Carolina’s Natural Heritage Trust.

In light of this evidence of our community values, even though Gray’s lily hovers at the brink of extinction, perhaps that tragic ending can be avoided if we can join Estep and Brewer, and our generous friends and neighbors, in holding on with all of our might. 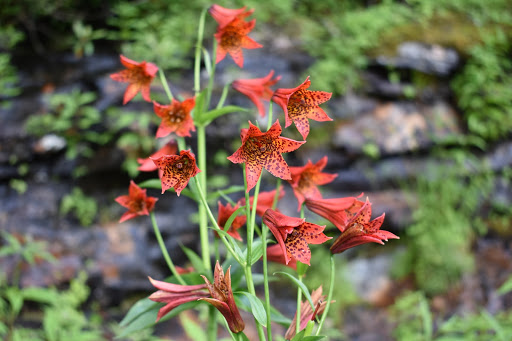 What You Can Do to Help Gray’s Lily