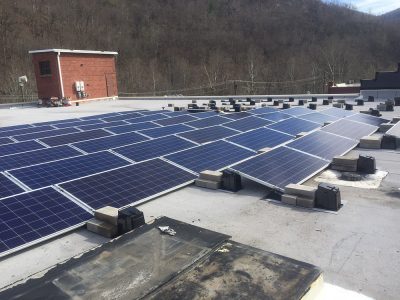 Powering a coal museum with solar panels is the kind of news story that attracts attention, as the city of Benham, Ky., discovered.

“It’s put us on the map internationally,” says former Benham Power Board chairman Roy Silver of the decision to install solar panels on top of the Kentucky Coal Museum, which used to be the town’s company store.

Benham was a classic Appalachian coal company town, owned by International Harvester until the early 1960s when the company sold its interests in the city, selling houses to residents and other buildings to the newly incorporated government.

The Benham Power Board was established in 1961 as a municipally owned electric utility that functions as a semi-autonomous entity of the city. Its members are appointed by city council. In recent years, the board’s efforts to reduce costs, enhance efficiency and increase the city’s renewable energy mix have made news.

In 2015, the power board launched Benham$aves, a program to improve the energy efficiency of local homes. The program will help residents add insulation to the coal camp homes that were built without regard to heating costs, upgrade heating and air-conditioning units, add water heater blankets and take other efficiency steps. The average cost to upgrade each home is around $10,000.

The pilot homeowner in the program saw her winter heating bills drop from nearly $600 a month to less than $300.

About two dozen houses in Benham have qualified for the program, says board member Carl Shoupe, but securing funding to upgrade the homes has proven difficult. Still, the owners of the handful of homes that have been worked on are very pleased, Shoupe says.

“They’re just tickled to death, happy as they can be,” he says. “Everybody’s just wishing we could get more money.”

But it is the recent solar power project that really put Benham on the map, Silver says, spurring national and international news coverage with the oddity of a solar-powered coal museum.

And it isn’t just the coal museum benefiting from the solar array. The 80 solar panels on the roof of the museum will also help reduce electric bills for city offices, utilities and the nearby Schoolhouse Inn, a former high school converted to a hotel.

This is just phase one of the project, according to Stanley Conn, an energy consultant who has been working with the power board for several years. The board is looking for other locations for solar panels, and when the project is complete, it should provide 20 percent of the summer peak energy load. All told, the project will generate 300,000 kilowatts of power a year.

The project is being fully funded by philanthropic donations through the Kentucky Community Development Corporation.

“The biggest customers are the Schoolhouse Inn, which is owned by the county; the coal museum, which is owned by the Southeast Kentucky Community and Technical College; and the city sewer and water plants,” Conn says. “The project is designed to help out with those loads. Keeping those entities financially viable helps the overall population in the system.”

The power board has run into a snag finding a location for the next phase. The best land identified — Coal Miners Memorial Park on Benham’s Main Street — is owned by Acin, an Arch Coal subsidiary. The board asked Acin for an easement, but the company refused unless a group of Benham residents (including Shoupe and Silver) drop a petition filed several years back to declare some of the mountains surrounding Benham and nearby Lynch as unsuitable for mining.

Silver says dropping the petition isn’t an option. “Benham and Lynch are both on the National Historic Register,” he says. “We want to protect the viewshed, and protect our water sources. Acin is just exercising the power that coal companies have had over our region for generations. The feeling is they are being petty and inhibiting progress.”

Still, Conn expects the project to be fully installed by the end of the year. When combined with a contract to purchase power from Cumberland River hydropower facilities, Conn says 40 percent of Benham’s summer peak energy load will be from renewables.

“Benham is full of natural resources,” Conn says. “The goal is to leverage what we can for the benefit of the people who live there.”