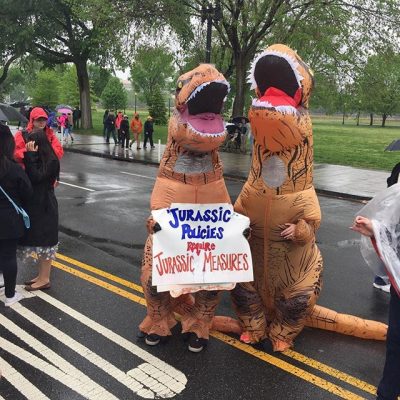 Two scientists – who shall apparently remain anonymous – share their feelings at the March for Science in D.C.

This year, Earth Day became a celebration of science as hundreds of thousands of people gathered in our nation’s capitol and at sister sites around the world to March for Science.

Despite the rain on Saturday, the mood at the Washington, D.C., march was “very optimistic and aspirational,” according to Appalachian Voices’ own IT specialist, Jeff Deal. “People were really coming out and standing up for the world they wanted to live in, instead of the one we now find ourselves in.”

Appalachian Voices was a sponsor of the D.C. event, and one of the main reasons Jeff says he joined the march was to help keep up the momentum that started with the Women’s March in January and will no doubt continue with the People’s Climate March this Saturday, and beyond.

“While it’s great to have these single impactful moments,” Jeff says, “I think they mean more when you connect them in a series of peaceful, organized protests.”

Matt Wasson, our director of programs, was also marching at the capitol, and he marveled at the need for the gathering.

“We’re living in a different place now, where people do have to speak up for things,” says Sandra Diaz, our former North Carolina field coordinator, who was also there.

She noted the historic nature of such a gathering of scientists, who generally aren’t known for collective, political action. “People I talked to said [their research] can’t end [in scientific publications]. … They need to be out there, having those conversations, trying to make science more understandable and more accessible to the average person.”

“We all depend on science so fundamentally, for our health and well-being and economic well-being,” says Matt. “So I think it was important, honestly, for everyone to be there. And I’m proud that Appalachian Voices rose to the occasion to be there.” 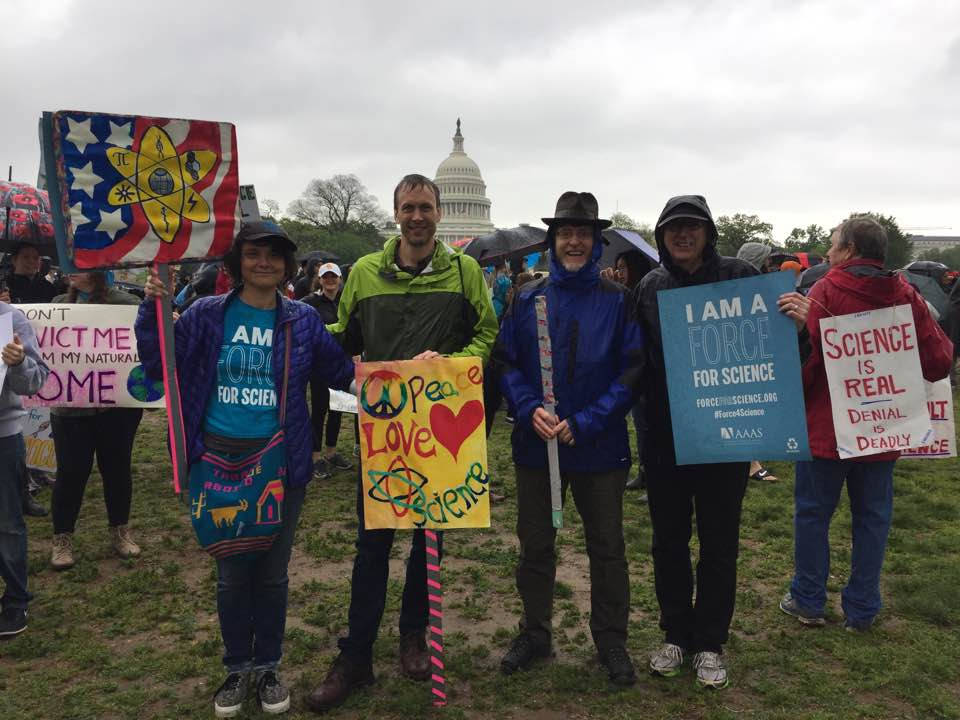 In downtown Charlottesville, more than 500 people turned out at the IX Art Park for a local “March for Science” sponsored by Cville CommUNIty. Appalachian Voices’ communications director was there with information about the proposed fracked-gas pipelines and petitions to Virginia’s governor to cut carbon pollution.

“At 1:30 when the rally started I was talking with a woman about what a bad idea these pipelines are, and I didn’t stop talking to people for two hours,” Cat McCue says. “People were really interested in this issue.”

She said several people understood that the facts of the pipelines — the Atlantic Coast and Mountain Valley — don’t make any sense for the climate, for the environment, or for the local communities that would be directly impacted.

“It was refreshing to hear people discussing factual evidence rather than political hyperbole.”

In Asheville, two members of the Appalachian Voices team tabled amid a sea of people: Molly Moore, the editor of The Appalachian Voice newspaper, and Meredith Shelton, our operations and outreach coordinator. More than 2,000 people attended the march and rally downtown, and scores of concerned citizens stopped by our table to share their thoughts and learn more about our work.

“It was wonderful to speak with people of all ages who want to see policy decisions that are based on sound science, and are willing to speak up and support science-based decision-making,” says Molly.

According to Meredith, “I think people were encouraged by the outpouring of support. I think they were encouraged that they were not alone. But just kind of in disbelief about everything that’s happened so fast to take down all of the regulations that we have so far.”

“I think, [with the march] being in Asheville, I had several people comment that this area was so close to their hearts. They live here, and we’re in the midst of spring blooming around them. People had tears in their eyes for their love of this region,” says Meredith.

Nick Wood, our North Carolina field organizer, made sure Appalachian Voices was represented at the march in Raleigh, as well.