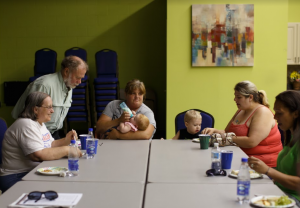 This is a joint blog between Appalachian Voices and Southern Alliance for Clean Energy. It is also the first in a series SACE will publish on recent energy efficiency meetings between TVA and community members all across the Tennessee Valley.

In the rural reaches of the Tennessee Valley, where farmland bends and dips between hills and rivers, the Tennessee Valley Authority promised in the 1930s to bring a modern era of electricity and jobs. Indeed, the New Deal federal program improved Appalachian and rural life in many ways, making good on those promises.

But it also came with some lasting side effects. With hydro-electricity and dam creation, more than 15,000 families had to move, farms were lost and geographic divisions between families and communities were created. Coal towns boomed and busted, leaving behind strip-mined mountains and stagnant local economies. Here in the rural places that time seems to have forgotten, the local residents have a keen memory for their past.

“History says TVA was there for the public good. If you ask folks now, they would say ‘used to be,’” said Bill McCabe, a resident of Hancock County, Tennessee — which has the second-highest poverty rate in the state.

These days, unaffordable electric bills are having a major impact on countless lives across the Valley. With the arrival of reliable electric service came financial uncertainty for many struggling families, as paying to keep older homes warm or cool that were never designed with energy efficiency in mind has resulted in sky-high and unpredictable power bills in summer and winter months.

Recently, McCabe and a group of other residents joined together around a table with TVA representatives to share their stories and offer suggestions for energy efficiency programs. Thankfully, TVA is currently engaged in discussions through its Energy Efficiency Information Exchange stakeholder planning group about developing new energy efficiency solutions for low-income families. To make sure local communities have a voice in the planning efforts, Southern Alliance for Clean Energy worked with TVA and local partners to help convene five local stakeholder groups across the Valley this month. Appalachian Voices led in organizing the first of these meetings in Claiborne County, Tennessee, on August 12.

The meeting was particularly important because it was the only local stakeholder meeting held in a rural area, and community members who came shared their stories with TVA from a distinctly rural perspective. Their experiences shed light on the unique challenges faced by rural residents and help inform potential new programs that could help reduce energy burdens. As with so many other things in rural Appalachia, there was a general feeling of the community being left behind when it comes to energy efficiency.

Unfortunately, those most in need of help are typically unable to access the home energy efficiency rebate program that TVA now offers, a shortcoming that TVA staff have acknowledged. Currently, customers who want to participate in TVA’s eScore program must first pay for an energy audit and the upfront cost of upgrades, often thousands of dollars. While there are some financing options available, they generally require high credit scores and home ownership.

One solution discussed at the meeting is tariff-based on-bill financing, which doesn’t require credit checks and allows for immediate bill reductions even with a monthly repayment charge added on a bill. Several electric cooperatives in Tennessee are currently considering developing on-bill financing programs, and similar programs have been highly successful in neighboring states such as How$mart Kentucky and Help My House in South Carolina.

Like some at the meeting with TVA, many rural families across the Valley live in older manufactured homes. Often, these homes have little or no insulation, leaky doors and windows, and inefficient space heaters and window air conditioners. And while many have gone to extreme cost-saving measures – a commonly cited practice is to huddle the whole family in one room for heat – families still end up with utility bills costing hundreds of dollars in winter and summer months. That’s a lot of money for most people in Claiborne County, which has a poverty rate of nearly 25%.

Not only are inefficient homes an unnecessary drain on precious financial resources, they are also a serious public health and safety issue. For some meeting participants, respiratory and other illnesses mean that poor indoor air quality and extreme temperatures become a major health risk. For one resident, a broken HVAC unit, which she couldn’t afford to replace, left her husband hospitalized for four days with heat exhaustion. Another resident has to leave her manufactured home during the middle of the day in the summer so her young children won’t get overheated – yet her electric bills are so high she struggles to buy diapers. Some also reported resorting to potentially unsafe methods to heat their homes in the winter, such as using stoves and clothes dryers.

This is an urgent problem that TVA can and should take the lead to solve. In addition to alleviating families’ unaffordable energy bills and potentially unsafe living conditions, new home weatherization programs would bring numerous good-paying jobs to places where they are desperately needed, helping to fulfill TVA’s mission to promote economic development.

As TVA continues working with stakeholders toward new low-income energy efficiency initiatives, it should take care to incorporate the invaluable input from the local communities that are most affected by its decisions. We thank TVA for meeting with these local community members, and we hope that the discussion will help to inform the development of meaningful energy efficiency solutions to serve the entire Tennessee Valley.

“Support extreme makeovers for rural homes, send message to distributors to invest in energy efficiency programs, provide funding for LED bulb give away.”

“Implement a community-based committee to set up a program to begin inspection on housing to first find the need within the community. Examine the cost of what it will take to implement this program and then base the cost on the most need.”

“Make the bill the same each month. Make more jobs for the people here in my area. See a need for the people and spend money here on this area. Help companies to move here with jobs.”

“I like the pay-as-you-save project that has been piloted in other states (like Arkansas) where these old houses have been behind the curve, power companies could see long-term benefits in investment. Not just in energy savings but local economies expanding (and new houses, new customers).”

“I think everyone coming together to help as a community and the weatherization program would bring in so much help to a lot of us need, especially low-income families and people living in older homes with large families. God Bless.”