Summer in Appalachia is the perfect time for hikes, swims and camping trips. But outdoor adventures can create tense encounters with species that are traditionally labeled as dangerous, such as snakes. Some snakes, like the venomous copperhead, should always be avoided. But most Appalachian snakes, like the northern water snake, are harmless to humans.

The northern water snake, or Nerodia sepidon, is one of the most common snakes in the eastern United States. Their habitat ranges from Maine to Georgia, and from the Great Plains to the East Coast. 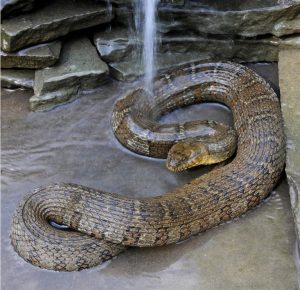 According to Michael Salotti, president of the Virginia Herpetological Society, northern water snakes never stray more than two or three hundred yards from water. This means that they can be frequently spotted at recreational water sources like swimming holes or waterfalls.

Throughout the warmer months, this non-venomous snake will bask on rocks or hang on branches near the water. “I often notice them hanging in tree branches about six feet above the water’s surface,” Salotti says.

The northern water snake emerges from hibernation between March and April. They mate in late April and give birth between August and September. The average female can give birth to around 20 live snakes at a time. The snake is most active in summer, just as people are flocking to water to cool off.

Unfortunately, people sometimes kill these harmless snakes after mistaking them for a more dangerous species, such as a copperhead or water moccasin. Water moccasins are not found in the cooler, higher elevations of Appalachia. But copperheads, like northern water snakes, swim and can be found near water across the region. So, if a snake is not easily identifiable as a non-venomous water snake, it is best to beware.

Northern water snakes can grow up to three feet long, and females are larger than males. The snakes have darker skin that ranges from brown to grey. According to Salotti, northern water snakes are more easily misidentified as they grow older, their patterns fade, and their skin becomes darker.

Although this snake sometimes falls victim to death by mistaken identity, Salotti says the overall population is healthy. Despite loss of habitat due to human population growth, it is not an endangered or threatened species. Northern water snakes are also protected throughout Georgia, where it is illegal to kill or keep non-venomous snakes.

Northern water snakes are relatively harmless creatures. Salotti says that if confronted by a human or larger animal on land, this snake will “try to flee into the water” to make an escape.

But if a northern water snake feels threatened or backed into a corner, it just might defend itself. Water snakes have strong bites, which can leave deep cuts. They can also release a powerful-smelling musk from their tail, or eject fecal matter in self defense.

According to the Virginia Herpetological Society, northern water snakes can also mimic venomous rattlesnakes by vibrating their tail to ward off predators.

If encountered with a northern water snake, Salotti advises simply leaving the snake alone, as confrontation is unlikely. However, in the event of a snakebite, wash the wound with soap and water and apply antiseptic.

Like other species of snakes, the northern water snake plays an important role in natural areas. The snake, which eats primarily amphibians and fish, acts as a major predator in forests and rivers and maintains balance in the food chain.

“Everything plays a role” in ecosystems, says Salotti. “You remove one of the predators, and it has a trickle-down effect.”

The southern and central Appalachian region is home to more non-venomous snakes than venomous ones. The two important exceptions are the copperhead and timber rattlesnake.

An easier way to identify a snake is by looking at its pattern. Northern water snakes have a bulb-shaped pattern that widens in the center, whereas the venomous copperhead has an hourglass-like pattern. Michael Salotti says that becoming familiar with the patterns of different species native to a specific area is the most reliable way to identify a snake.