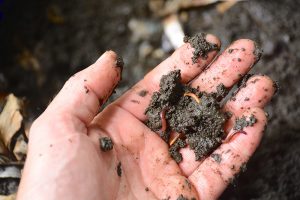 Of more than 4,000 species of worms, only a few are good for composting. Photo by Jimmy Davidson

When Tracy Myhalyk first learned about vermicomposting in 2002, she was enrolled in an agroecology course as an Appalachian State University graduate student. After a colleague piqued her interest, she set up her own worm bin and began making compost.

Vermicomposting is the practice of feeding worms table scraps and other organic matter in order to obtain a richer soil.

A typical vermicompost bin contains roughly 1,000 worms in a moist, dark habitat made from damp newspaper, cardboard and leaves mixed with fresh organic matter. The worms consume the food scraps and paper items and then produce a nutritious compost made of the worms’ feces, or “castings.”

The compost has a number of uses, most commonly as a fertilizer for household plants and gardens. Vermicomposting recycles household waste into usable material faster than other forms of composting. It is also an aerobic process, which means that odor-blocking oxygen is present during decomposition and prevents foul smells.

After a year of composting with worms, Myhalyk set up a booth at the local farmer’s market and began advocating for vermicomposting and selling her one-of-a-kind kits with starter worms. While she no longer makes the kits, they are still a talking point across the area.

“Sometimes, someone will recognize me and say ‘Hey, you gave me worms!’” Myhalyk says.

She has also taught workshops and classes on how to manage worm composting bins, as well as the environmental benefits of vermiculture.

Requiring minimal time and resources, vermicomposting can be a simple and efficient way to lead a more sustainable lifestyle. It also allows individuals the chance to experiment with their setup.

Most composters, like Randal Pfleger, use their bins at home to process table waste. He has experience with traditional non-worm composting both at home and in community gardens as the executive director of Grass to Greens, a yard-care service and social enterprise of Bountiful Cities, an urban agricultural and community gardening non-profit based in Asheville, N.C. Pfleger says vermicomposting is best used at home. Small bins can create compost for use in gardens and household plants, or the worms can be used for fishing bait.

As decisions are made regarding the habitat, drainage, water content and harvesting, it is sometimes necessary to have a trial-and-error mentality. 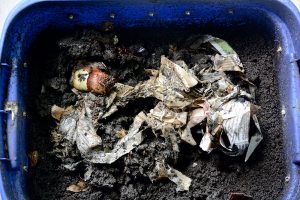 Vermicomposting is faster than composting without worms. Photo by Jimmy Davidson

For instance, when Pfleger finds it difficult to separate the worms from the compost, he makes use of other natural elements. He finds a sunny spot outdoors and dumps the contents of the worm bin. The solar heat dries the top layer of the compost, causing the worms to retreat inward to the cooler, wetter center of the compost.

Pfleger then separates the compost into smaller, dried-out piles, as the worms continue to retreat from the sun. He is typically left with compost as well as a “worm ball” that goes back into the bin to start the process all over again.

However, some challenges are more difficult. According to Tracy Myhalyk, due to Appalachia’s frigid winters, keeping a compost bin from November to March requires being more vigilant of the temperature and humidity levels around the bin, and storing it in an insulated place such as an indoor kitchen or closet.

In the United States, a quarter of the country’s municipal waste comes from food, yard trimmings or other organic matter that can be composted.

According to North Carolina State University, over 98 percent of food waste gets thrown into landfills where it decomposes and produces methane, a greenhouse gas that contributes to climate change. Landfills account for 20 percent of methane emissions in the United States. And worldwide, it is estimated that landfills emit between 30 to 70 million tons of methane each year, either directly into the atmosphere or into the surrounding soil.

Composting organic waste rather than disposing of it in landfills can significantly reduce methane emissions and diminish an individual’s contribution to climate change.

For Pfleger, worm composting puts waste into perspective and can help people “think about how we generate waste, what we do with it.” The issue of assessing an individual’s contribution to municipal waste, Pfleger jokes, “opens up a big can of worms.

Which worms do I use?
The species Eisenia fetida, or red wigglers, are most commonly used for household compost bins. A typical starter system includes about 1,000 worms. Red wigglers can consume about 25 percent of their body weight each day.

How do I set up the bin?
For a red wiggler habitat, place newspaper, dried leaves, water and other organic material into a plastic bin, and make certain the material has the consistency of a moist sponge. Ensure that the worms have a comfortable temperature of between 60 and 70 degrees. Cut holes in the top of the bin to provide ventilation.

What do I feed the worms?
Worms can eat almost any organic or biodegradable material, including vegetables, paper coffee filters, rinsed eggshells and other table scraps, but meat or dairy products can attract unwanted pests and scavengers. Citrus should also be avoided because it contains the chemical limonene, which is harmful to worms.

How often do I feed the worms?
Red wigglers do not need to be fed on a regular schedule. The more worms that are in a bin, the more frequently food can be added. To avoid a bad odor, make sure that the worms have eaten all of their food before placing more into the bin, and periodically add more newspaper or dried leaves.