Fueling Cars with Plants- A test case in North Carolina

Biofuels — liquid fuels like ethanol that are made from the fermented sugars of feedstocks such as corn or sugar beets — are usually associated with the corn-belt of the Midwest. But in 2007, North Carolina became a leader in research in this field when the legislature created the Biofuels Center of North Carolina. 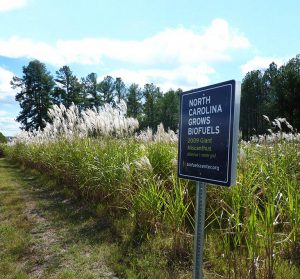 But as the state’s leadership changed, so too did the commitment to funding this research. According to a press release, the center was closed after its funding was eliminated from the 2013-2015 state budget.

The N.C. Agriculture and Consumer Services Department inherited a quarter of the center’s budget and a much reduced mission, according to E&E Publishing.

BioEnergy in the Southeast

Despite the political changes and failed investments, North Carolina continues to take steps in this developing industry. Blue Ridge Biofuels, which produces biodiesel from recycled restaurant cooking oil, moved last year from its Asheville plant to a larger factory in Catawba County, N.C. And in 2014, Virginia-based Tyton BioEnergy Systems bought an abandoned biofuels facility in North Carolina and is now working to make aviation fuel from genetically modified tobacco plants.

Dr. Bill Kovarik, professor of communications at Radford University and former editor of this publication, literally wrote the book on biofuels. “The Forbidden Fuel: A History of Power Alcohol” was written by Kovarik and two colleagues in 1982 and revised in 2010.

According to Kovarik, the transportation sector will likely continue to use various liquid fuels, such as gasoline and diesel, for some time because of the advantage liquid fuels currently have over battery storage and technology. “All these different kinds of fuels need different kinds of bioenergy solutions,” he says.

But Kovarik stresses that it is important for the United States to adopt a set of standards to ensure that the biofuels industry develops in a responsible way. Such standards, he says, should safeguard biodiversity and labor standards, accurately account for the carbon emissions, and guard against pollution during production and use.