Forests across the Southeast are seen as a potential source of “green” energy by the growing wood pellet industry. Photo courtesy of Dogwood Alliance

Near Ahoskie in eastern North Carolina, the global push for “green” energy can look like a grove of cypress trees reduced to a wasteland of stumps. This scene is repeated across the Southeast, where forests are being cut to fuel Europe’s — and particularly the United Kingdom’s — push to use alternative fuels.

In 2009, the European Union adopted a set of energy and climate goals for 2020. These targets included a 20 percent cut in greenhouse gas emissions, a 20 percent improvement in energy efficiency and a commitment to fuel 20 percent of the E.U.’s energy from renewable sources.

The guidelines consider all biomass, regardless of its source, both carbon neutral and renewable. The European Commission defines biomass as “organic material such as trees, plants, and agricultural and urban waste … used for heating, electricity generation, and transport fuels.”

Despite its well-meaning goals, this policy has led to the dramatic rise of the wood pellet industry in the southeastern United States.

According to the United Kingdom’s Biomass Energy Centre, “wood pellets are made by compressing dry sawdust or wood shreds under extremely high pressure until the [wood tissue] softens and binds the material together.” Their compact size and low moisture content make wood pellets better for export and more energy dense than less processed wood.

The U.S. Energy Information Administration reports that the country’s export of wood pellets nearly doubled from 1.6 million tons in 2012 to 3.2 millions tons in 2013. The following year, exports increased by an additional 40 percent, rising to 4.4 million tons and making the United States the world’s leader in wood pellet export. Most of the pellets are shipped to the United Kingdom to help meet the EU targets set in 2009. 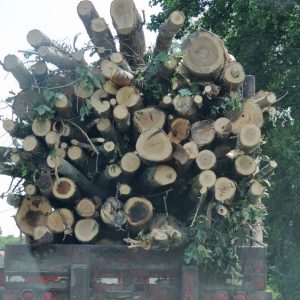 According to a study published in Science Magazine in 2013, forests in the southeastern United States had a disturbance rate four times greater than that of South American rainforests during the years between 2000 and 2012. Forest disturbance can result from natural events such as fires or insect damage, or from man-made events such as logging or clear-cutting.

Adam Macon, a campaign director for Dogwood Alliance, a nonprofit environmental organization based in Asheville, N.C., connects this increase with the large-scale logging operations that support the wood pellet export industry and have impacted tens of millions of forested acres.

The problem with identifying all biomass as carbon neutral arises from a misunderstanding of how burning biomass would impact climate change.

Policies, such as those in the European Union, that consider biomass to be carbon neutral are based on the assumption that carbon released when burning trees will be reabsorbed by a subsequent generation of forests replanted in place of the harvested trees. However, a report released by the Partnership for Policy Integrity in June concludes that far from being carbon neutral, burning wood on a large scale can be worse than burning fossil fuels.

“Typical [carbon dioxide] emissions at a utility-scale biomass plant are 150% those of a coal-fired plant, and as much as 400% those of a natural gas facility,” the author of the report states. “Not only does burning wood emit more carbon pollution per unit energy than burning coal or gas, but also, cutting and burning the trees that were growing and taking carbon out of the atmosphere dramatically increases the emissions impact.”

In May 2015, the Natural Resources Defense Council, an environmental advocacy group, pointed to the growing scientific consensus that burning biomass for electricity would not reduce carbon emissions for 35 to 100 years, depending on the types of forests replanted. “This time period is significant,” an issue brief from the organization states. “Climate policy imperatives require dramatic short-term reductions in greenhouse gases, and these emissions will persist in the atmosphere well past the time when significant reductions are needed.”

BioEnergy in the Southeast

This is because emissions rates would only begin to fall after the forests have had several decades to recover, and only if the harvested trees are replanted and not themselves reharvested. Neither of these outcomes is guaranteed to happen.

Due in large part to advocacy by citizen and environmental groups, the European Commission announced in January that it has opened an investigation into whether the United Kingdom’s dependence on biomass to meet its emission goals is in keeping with European Union climate objectives. It is unclear what impact the United Kingdom’s recent vote to leave the E.U. will have on this climate policy.

In April, the U.S. Senate passed a bill including an amendment that new energy policies must reflect the “carbon-neutrality of forest bioenergy.” This provision is similar to the E.U. policy that has dramatically impacted southeastern forests. If enacted, the measure would likely lead to continued deforestation.

Utilities in the Southeast are also converting to biomass. Since 2013, Dominion Virginia Power has converted three of its coal-fired power stations to burn 100 percent biomass, and Duke Energy is exploring similar options.

According to Biomass industry officials, these facilities use wood that would otherwise be wasted. Bob Cleaves, president and CEO of the Biomass Power Association, told National Public Radio that the process relied on materials such as “orchard prunings and rice hulls, tops and limbs from forestry operations, bark, sawdust.”

A 2012 report by Downstream Strategies, an environmental consulting group, found that if biomass is produced from wood that would otherwise be wasted, and if energy production is at a small scale, biomass could play an important role in an Appalachian energy future relying primarily on renewables such as wind and solar.

But Adam Macon of Dogwood Alliance is less optimistic.

“Existing forest products industries, such as paper or saw timber, have been utilizing the residues from logging for generations,” Macon says. “So, this is not like there was a whole bunch of wood just lying around. …This is an additional market for wood. And what that has done is that has driven an increase in logging, and an increase in conversion of our natural forests to pine plantations. All in the name of addressing climate change.” 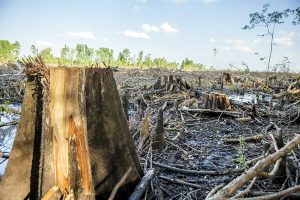 A cypress grove is reduced to stumps near the Enviva wood pellet factory in Ahoskie, N.C. Photo courtesy of Dogwood Alliance

Macon and his colleagues from Dogwood Alliance have documented trucks loaded with mature trees entering — and empty trucks leaving — Enviva’s wood pellet facility in northeastern North Carolina, which primarily produces pellets for export. This practice was also witnessed by a reporter from The Washington Post last summer.

Macon, who grew up in eastern Kentucky a few miles from a mountaintop removal coal mine site, puts the wood pellet industry in context this way: “It’s the same story. It’s big companies coming in, extracting our natural resources, exporting the profits, exporting our natural capital, and leaving little benefits back to the communities,” he says.