Editor’s note: The following op-ed about how far the N.C. Department of Environmental Quality has strayed from its mission appeared in The News & Observer on Monday, May 16. On Wednesday, the department announced tentative closure deadlines for coal ash ponds at Duke Energy facilities across the state, but told lawmakers it wants to revisit those rankings in late 2017. Read our statement on the tentative rankings here. 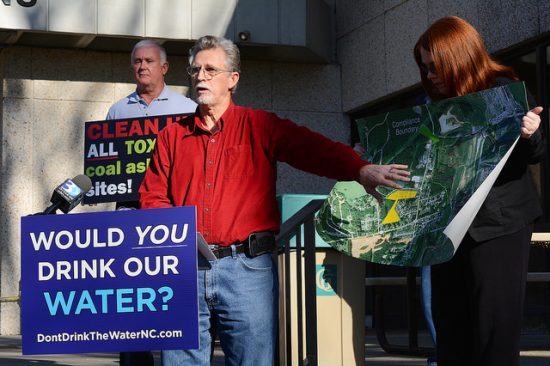 Dangerous attempts to cover up, rather than clean up, drinking water contamination only reveal how detached DEQ has become. Lawmakers should acknowledge DEQ’s failures and focus on moving forward on truly cleaning up coal ash ponds.

Sworn testimony of a state epidemiologist that became public over the weekend confirms what many North Carolinians living near Duke Energy’s coal ash ponds already assumed. Health experts who developed the drinking water standard that led officials to tell hundreds of residents last year that their water is not safe did not support the McCrory administration’s decision in March to rescind the warnings.

The disclosure comes as state lawmakers consider a bill that would prohibit local health departments from issuing health advisories to private well or public water users unless contaminants exceed levels set by the federal Safe Drinking Water Act. But that law is intended as a backstop to be built upon, not as a floor for states like North Carolina that are content with the bare minimum.

From the state’s perspective, the bill is a quick fix to make certain that officials with the Department of Environmental Quality and Department of Health and Human Services never again suffer the backlash they have seen since lifting the warnings about high levels of vanadium and hexavalent chromium – potentially due to proximity to coal ash ponds. Residents were told their water was unsafe to drink or use for cooking. There is no federal drinking water standard for vanadium or hexavalent chromium.

These are just the latest examples in a long pattern of attempts by the McCrory administration to insulate itself from outside criticism and, more importantly, from citizens’ legitimate concerns. These tactics have been central to the dismantling of DEQ, where I worked for nearly nine years. I resigned in 2013, around the time former Secretary John Skvarla pledged to transform the agency into a “customer-friendly juggernaut” with the primary role of serving industry.

After Skvarla’s departure, the promotion of Donald van der Vaart to the position showed McCrory’s skill at hand-picking leaders guided by an ideological compass that points away from environmental protection. Enabled by anti-regulatory powers in the legislature, DEQ’s leadership has abandoned the principles necessary to serve the public. North Carolinians across the political spectrum should be alarmed at the state of the agency today.

As we await the announcement this month of DEQ’s final plans for closing coal ash ponds across the state, we recognize that there has been progress toward addressing this significant problem. But the pledges to safely close ponds and protect communities after the Dan River disaster are distant memories now. Instead, DEQ’s top-down decision-making has dominated the process.

The final months of the coal ash pond ranking process have been particularly frustrating for citizens, advocates and, presumably, many of the rank-and-file at DEQ. After a draft report leaked last December revealed that DEQ’s own experts recommended full closure of most coal ash ponds, van der Vaart stepped in, assuring the public that the draft was based on “incomplete data.” Two weeks later, the agency’s final report listed only eight of the state’s 32 ponds as being “high” risk and deserving full closure. Most are now proposed as “low” or “low-intermediate” risk, meaning the coal ash could be capped in place and continue to threaten to water quality.

What would have been the only remaining line of defense, the Coal Ash Management Commission, was created in part to review DEQ’s recommendations before they become final. But McCrory disbanded the commission in March as a series of hearings to gather public input on the state’s coal ash sites was underway. Rather than acknowledging the independent role the commission was created to play, van der Vaart has asserted that his department has everything under control.

DEQ leaders know citizens are concerned about their water and health. The Alliance of Carolinians Together Against Coal Ash, a statewide coalition of North Carolinians living near Duke Energy’s coal ash sites, has made that evident. They’re concerned with good reason. When the U.S. Commission on Civil Rights arranged a town hall meeting in Walnut Cove near Duke’s Belews Creek power plant, it wasn’t to spotlight DEQ’s success mitigating an environmental injustice.

Some state lawmakers are taking urgent action to re-establish the Coal Ash Management Commission. I’m glad; a strong independent commission is critical to earning the public’s trust and properly closing coal ash ponds. But dangerous attempts to cover up, rather than clean up, drinking water contamination only reveal how detached DEQ has become.

Lawmakers should acknowledge DEQ’s failures and focus on moving forward on coal ash cleanup, not continuing to enable an agency that has lost its way.