Residents of Walnut Cove have fought to win justice for those who have been harmed by coal ash pollution at the nearby Belews Creek power plant. 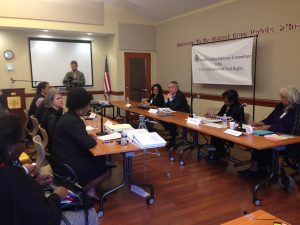 Residents of Walnut Cove, N.C., testified about the threats coal ash poses to their community during a hearing organized by the North Carolina Advisory Committee to the U.S. Commission on Civil Rights.

Last month, more than 1,500 North Carolinians flocked to the 14 public hearings on coal ash basin closure held by the N.C. Department of Environmental Quality. The turnout was great, the news coverage was thorough, and the oral comments delivered by residents (many of whom live within 1,500 feet of Duke Energy’s coal ash ponds) were pointed and poignant.

Residents commented on a lack of science and data in Duke Energy’s groundwater reports and noted the cozy relationship between Duke, Gov. Pat McCrory and DEQ. They explained why they do not feel safe drinking their well water and demanded that all coal ash sites be made high-priority for cleanup and that no site be capped-in-place. And they shared heart-wrenching stories of family and friends who have passed away or are currently suffering from illnesses associated with exposure to heavy metals.

On the heels of the series of March hearings, the U.S. government added one more critical hearing to North Carolina’s expansive schedule: a hearing on coal ash as it relates to civil rights.

The U.S. Commission on Civil Rights is currently preparing a report for Congress, President Obama, and the U.S. Environmental Protection Agency on coal ash and its impact on civil rights, especially in low-income communities and communities of color. In February, the commission held a hearing in Washington, D.C., where hundreds of coal ash activists and coal ash neighbors from across the country gathered and testified about the impacts coal ash has had on their communities. State advisory committees to the commission also had the opportunity to hold local field hearings, but only two in the nation did, and one of those was in the small town of Walnut Cove, N.C.

This was a big deal for residents of Walnut Cove, who have fought for over three years to make their tragic story known and to win justice for those who have been harmed by Duke’s coal ash pollution at the nearby Belews Creek power plant. In response to the interest in coal ash expressed by the North Carolina Advisory Committee to the U.S. Commission on Civil Rights, the Walnut Cove community showed up in a big way.

Throughout the day, the Walnut Cove Public Library was packed with local residents and allies. Several community members were featured on the panels, including Tracey Edwards and David Hairston, lifelong residents of Walnut Cove who spoke to their experience of growing up with the coal ash falling like snow and witnessing the alarming rates of illness, especially cancer, and subsequent deaths in their small, rural community.

“Duke Energy promotes poison for profit at the expense of human life,” remarked Edwards. “You can’t drive in any direction from the coal power plant without knowing someone who has cancer.”

Long-time volunteer and activist, Caroline Armijo, who grew up in a neighboring town of Walnut Cove, presented on a panel alongside DEQ Assistant Secretary Tom Reeder. While Reeder praised DEQ and the McCrory administration for their efforts to clean up coal ash in North Carolina, Armijo made it clear that those efforts were not enough. She cited the pervasive illnesses, and the desire among community members to look at solutions that would last longer and be more protective than lined landfills.

The advisory committee members were attentive and moved by the stories and information presented. They were concerned not just about the health impacts of coal ash, but also the associated health care costs and psychological trauma, repeatedly asking community panelists if anyone is helping them in their plight. Committee Member Thealeeta Monet commented on the shameful lack of mental health care available to coal ash neighbors saying, “You cannot be collateral damage without being damaged.”

To the surprise of the audience, committee member Rick Martinez, who has ties to the conservative John Locke Foundation and the McCrory administration, told Duke Energy’s Mike McIntire that he should tell his superiors that the people of Walnut Cove would not accept anything less than full excavation of the coal ash pond. “Tell your management to start budgeting for that eventuality,” Martinez said, “not just here but throughout the state.”

In addition to the scheduled panelists, around 40 additional community members and allies spoke during the open comment section of the hearing. Some speakers had travelled from other North Carolina communities near to Duke Energy’s coal ash ponds, and spoke for both their communities and in solidarity with residents of Walnut Cove. The final speakers of the day were all locals who had lost numerous loved ones to cancer.

Shuntailya Graves, a college student studying to become a biologist brought many in the audience to tears when she listed the cancers that each of her immediate family members have sufferred. Adding to the concerns of health care costs she explained, “My mother was diagnosed with thyroid, ovarian and uterine cancers. She had a full hysterectomy and later was diagnosed with thyroid and brain cancer. She has had nine cancerous brain tumors. Her medicines for a 30-day supply are $1,900. Who is going to pay for that? This all comes from coal ash.”

Vernon Zellers told the commission about losing his wife to brain cancer. The committee chair, Matty Lazo-Chadderton, walked over to give him tissues as he sobbed in front of the crowd. “When am I going to die?” he asked, “Am I next?”

Not only were the committee members clearly moved by the day’s events, but so were the three presidentially appointed members of the U.S. Commission on Civil Rights who sat in the audience. Because of the excitement felt by everyone in the weeks leading up to the hearing, the U.S. Commission on Civil Rights’ chairman, vice-chair and another commission member all journeyed to Walnut Cove to listen to the day’s speakers. Chairman Martin Castro commented that the Walnut Cove hearing was the most powerful he had ever been to, both in content, community engagement, and emotional persuasiveness.

With tears in her eyes, Commissioner Karen Narasaki told the community members, “You have given life to the policy issues that can get so wonky. You have made it clear that in this case, it is just about common sense.”

Castro told the community that he related strongly with their stories, having grown up in an industrial area in a community that also suffered from high rates of cancer.

“Don’t tell me there is not a correlation,” he remarked. “This is not just a constitutional or public policy issue. This is a real life issue. Know your stories did not go unfelt or unnoticed. There is something wrong with the system and we need to figure out how to change the system.”

“You will have an advocate,” he promised, “not just here, but in Washington.”

The hearing was a blessing for the community of Walnut Cove, and not one person left without feeling the sense of sorrow, hope, love, passion and joy that emanated from the day’s speakers. As we continue to fight for justice for the little town next to Duke Energy’s Belews Creek power plant, we can take solace in the knowledge that when residents, DEQ and Duke each presented their testimonies during a federal hearing, the light of truth shone unmistakably bright upon the everyday people who have lived, lost, and fought a Goliath in the shadow of its smokestacks.