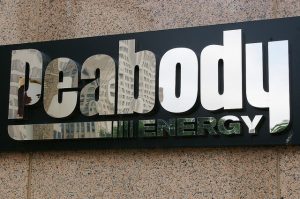 While the company no longer operates in Central Appalachia, the story of Peabody Energy’s downfall is similar to those of major Appalachian producers. Photo via Flickr licensed under Creative Commons.

This week, the world’s largest private-sector coal company filed for bankruptcy and pretty much no one was surprised.

But Peabody’s production, the depth of its debt and the scale of its liabilities set the bankrupt coal behemoth apart.

The company operates the North Antelope Rochelle mine in Wyoming, the largest coal mine in the country. Last year, that mine alone accounted for 109 million tons of the nearly 900 million tons of coal produced in the U.S.

In order to eventually clean up its mines, Peabody is on the hook for more than $2 billion, but more than half of that amount is secured with “self-bonds,” basically a coal industry IOU conveniently co-signed by the taxpayer. It’s estimated that the company has amassed around $6 billion in debt.

While Peabody no longer operates in Central Appalachia, the story of its downfall is similar to those of major Appalachian producers Alpha Natural Resources and Arch Coal. Like those companies, Peabody bet big on overseas demand and took on billions in debt in 2011 when it acquired the Australian producer Macarthur Coal. (Stop me if you’ve heard this one.)

Rather than surging as predicted, demand for steelmaking metallurgical coal plunged. According to a February study by the economic analysis firm Rhodium Group, 93 percent of the decline in the industry’s revenue between 2011 and 2014 was due to a drop in the consumption and cost of metallurgical coal. That hit, combined with competition from natural gas and clean energy at home, eventually became too much to bear.

Central Appalachia also has a lot of first-hand experience with what happens next, especially after Alpha’s and Arch’s bankruptcy proceedings. In recent months, those companies have worked to dodge environmental cleanup liabilities and their obligations to workers past and present. Yet, somewhere, both Alpha and Arch found millions of dollars in bonuses to reward executives. For what? Not jumping ship, essentially.

Based on its past actions, I’m not sure we should expect any different from Peabody. After all, the coal company thought to be “too big to fail” may have gotten there partly by creating companies to fail. Look at what happened to Patriot Coal, a twice-bankrupt company created in 2007 from unionized, Peabody-owned mines in West Virginia and Kentucky and saddled with pension and health care obligations to more than 8,000 retired miners.

In fact, Appalachian citizens may be the least surprised that Peabody has joined the coal industry’s bankruptcy club.

“Here in Kentucky, we’ve known the coal industry has been leaving for 30 years,” said Carl Shoupe, a retired third generation coal miner and member of Kentuckians For The Commonwealth. So Shoupe and others across the region are staying focused on the future.

“Mr. Peabody’s coal train might have hauled away our coal — and the profits along with it — but we Kentuckians are still right here, fighting every day for a bright future and demanding our elected leaders do their job to help us transition to a new economy while keeping our promises to the coal miners who powered this country.”