Recently, coal exports have provided operators in Appalachia with a crucial buffer against the market-driven forces that are shaping the energy landscape across the United States. 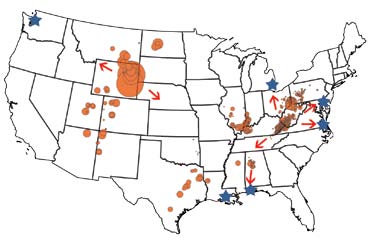 The Norfolk, Va., port exported approximately 40 percent of coal that left the U.S. in 2011, the majority of which was metallurgical coal. Exports of thermal coal from Appalachian mines have increased slightly in the past few years, but changes in port capacity in the Pacific Northwest could create a nearly endless supply of cheap Powder River Basin coal to Asian markets. Map produced by Appalachian Voices.

According to the U.S. Energy Information Administration, between 2009 and 2011, coal exports nearly doubled in response to stagnant domestic consumption. This year, the EIA forecasts that exports will reach a historic high of 125 million tons.

The trend has led some to believe that the coal industry will be able to offset domestic competition from natural gas and even the strictest regulatory scenarios by feeding overseas demand.

But recent events including China’s inflation-inducing economic trends and the opposition to new export terminals in the U.S. Pacific Northwest are reminders of the myriad factors that influence the world’s ever-changing appetite for coal and the nations who will be best able to fulfill it.

Although the world’s quest for growth has contributed to the precipitous rise in exports, changes at home have hastened the trend. Abundant natural gas and the announced retirements of hundreds of coal plants nationwide, among other factors, are pressuring U.S. coal operators to rethink the way they do business by refining strategies to suit overseas markets.

For major coal companies operating in Appalachia, that has meant focusing on metallurgical coal used in steelmaking, which is sold at a higher price than thermal coal and has seen foreign demand grow in the past decade.

Nearly all of the 70 million tons of metallurgical coal exported from the United States in 2011 was mined in Appalachia and shipped from Eastern ports. The increased focus on metallurgical coal exports was put in the spotlight after Alpha Natural Resources, Peabody Energy, and Arch Coal all bet big on overseas demand through a series of acquisitions.

Two months before Alpha Natural Resources acquired Massey Energy in January 2011 to become the leading producer of metallurgical coal in the United States, JPMorgan Chase & Co. forecast prices for the high-quality coal — which hit a record $330 per metric ton in early 2011 — to increase by 50 percent in 2012.

Instead, the price has plunged.

In the second quarter of 2012, the economy of China, the world’s largest consumer of coal and its largest steel producer, showed signs of waning. After helping drive up prices for close to a decade, China’s demand for metallurgical coal quickly faltered and prices fell by 50 percent. Additionally, as growth in other sectors slows, Asia is left with a supply glut in steel, further driving down demand.

As the largest producer in Appalachia, Alpha Natural Resources, caters as much as 70 percent of its metallurgical coal production to export markets. In September, as an already severe industry downturn was beginning to face emerging challenges in metallurgical coal markets, Alpha announced it would restructure to meet “the evolving demands of a changing global coal market.”

Understanding their interdependency with Appalachian coal and a strong export market, at the end of November both CSX and Norfolk Southern railroads announced they would cut rail tariffs by approximately 15 percent to help exports of metallurgical coal remain competitive.

A handful of developed nations are working to decrease their dependence on coal, but it remains a critical component in the world’s energy generation and a driver of the global economy. A recent report by the World Resources Institute revealed that around 1,200 new coal-fired power plants are being considered around the world, two-thirds of which would operate in China and India.

While metallurgical coal prices are expected to stay stagnant next year, the price of thermal coal is expected to increase along with global demand.
With easy access to ports, Appalachian coal operators are taking advantage of the growing need for cheap energy sources overseas. But the region also faces a threat to thermal coal exports from its Western counterpart.

Thick coal seams and large-scale operations in Wyoming’s Powder River Basin produce some of the cheapest coal in the world. But the lower energy content of the coal, long distances to transport by rail and limited export capacity from ports in the Pacific Northwest limit its use in the United States and abroad.

That could change, however, as plans to expand and build new export terminals have surfaced in Washington and Oregon that could ship as much as 110 million tons of coal to Asia each year.

Public interest groups, 57 native tribes and the Seattle City Council have been vocal in their disapproval. In response to the growing opposition, Peabody Energy, Arch Coal and other industry groups formed the Alliance for Northwest Jobs & Exports, and began airing ads touting the potential economic benefits of expanding coal exports.

While the Appalachian coal industry will benefit as a global leader in metallurgical coal exports for the foreseeable future, increased access to Powder River Basin coal could significantly change the region’s role in thermal export markets.

Even as coal exports receive the attention of industry experts and analysts, they remain exceedingly complex. So much so that a Lummi tribal leader symbolically burning a mock check from the mining industry on the beach in Bellingham, Wash., instead of signing a real one, could affect the outlook for Appalachian exports far into the future.