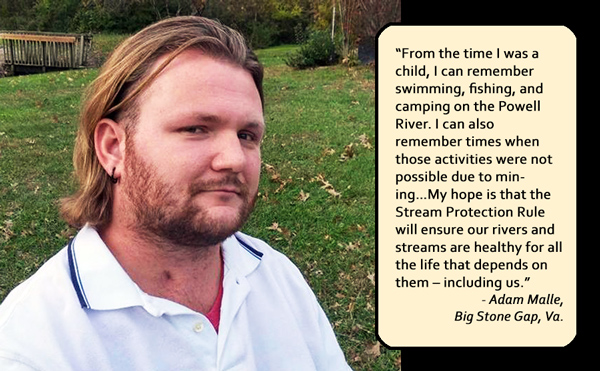 This is what Adam Malle of Big Stone Gap, Va., wrote to the federal Office of Surface Mining Reclamation and Enforcement last fall. He and dozens of others in Central Appalachia urged the agency to finalize the strongest possible Stream Protection Rule, expected sometime before the end of the Obama presidency.

In early February, the Senate Environment and Public Works Committee heard testimony on the rule. Predictably, the Republican members of the committee, chaired by the staunchly anti-regulation Sen. James Inhofe, ignored the vast body of scientific data and the perspectives of coalfield residents as presented in testimony by Appalachian Voices’ Director of Programs, Matt Wasson. They likewise dismissed OSMRE Director Joe Pizarchik’s explanation that, based on the science over the past 30 years, there is still surface water and groundwater that is being impacted by surface mining. 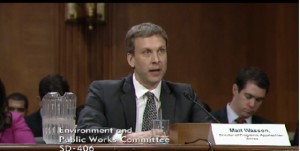 Instead, Inhofe and the other GOP senators mostly harped on the tired accusation of federal overreach, commonly lodged against any federal government entity engaged in the execution of its duties, in this case the OSMRE. In so doing, these senators reduced any possible discussion of mining’s impacts on our water, and the failings of current regulations, to a mere political side-show.

Aside from these proceedings, and a nakedly deceitful report by the National Mining Association, discourse on the Stream Protection Rule has dropped off steeply ever since a series of public hearings and the OSMRE’s formal public comment period on the matter concluded in November.

The rule is intended to protect streams and rivers from the adverse impacts of surface coal mining and certain underground mining operations. Regulations designed to mitigate such impacts have not been updated since 1983, failing to address significant advances in scientific monitoring as well as changes in mining techniques. While public dialogue on the Stream Protection Rule has largely faded, the impact of mining on our streams has not.

On January 15, residents of Martin County, Ky., reported a black water spill into Wolf Creek, which empties into the Tug River above the municipal water intake of Kermit, W.Va. A week earlier, I spotted new orange water seeping from a mine site into the Powell River just a few miles from my home in Wise County, Va. Orange water is common around Central Appalachia. It’s not easy to treat once it appears, and new seeps seem to appear all the time, even after mines have closed down. Upon analysis of this particular point source, we discovered high levels of dissolved solids, which is likely due at least in part to the iron that causes the orange color, but can also indicate unsafe levels of other more harmful pollutants associated with coal mining, such as selenium, arsenic or beryllium.

According to the Virginia Department of Mines, Minerals and Energy’s citizen complaints log, there have been 13 incidents of discolored and/or odorous water discharging from mining operations into Southwest Virginia’s waterways over the past year and a half. This may not sound like a huge number, but bear in mind that it reflects only incidents that are reported. It does not account for discharges of contaminants that may have gone unreported because they are essentially invisible, such as exceedances of heavy metals that are toxic to wildlife and humans. Nor does it reflect the concerns of community members who simply don’t bother to file complaints, as they believe the DMME to be either inept or outright complicit in the routine pollution violations of the coal industry.

During the same time period, the DMME also logged dozens of reports of hydrological disturbances such as increased flash flooding, mudslides, saturation of ground and sedimentation of streams adjacent to active, reclaimed and abandoned surface mines across Virginia’s coalfield region. Too often, disturbances of this nature go unmitigated under existing enforcement mechanisms, but they could and should be addressed by the Stream Protection Rule.

As the OSMRE crafts the final version of the rule, carefully considering the best available science and the concerns of community members, it would behoove us all — especially OSMRE staff — to remember that this is not a matter of abstract policy. Nor is it about politics. It is about the health and well-being of Appalachian communities and ecology. It is about our water and our future.

Toward that end, here are some of the comments submitted by impacted community members to the OSMRE, expressing the need for a strong, strict and enforceable Stream Protection Rule. 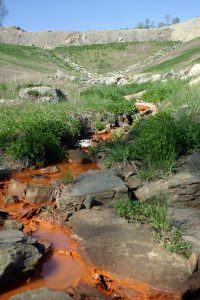 Polluted water below a surface mine in Kentucky

“I am proud to be a Coal Miner’s daughter. It’s true. Coal put the food on my table. It also put the poison in my water. You don’t understand just how important your water is until it is gone. In Martin County, the water is loaded with heavy metals and other toxins from coal sludge. After the sludge spill in 2000, we learned chemistry by testing the water, biology by watching the effects on living creatures, and political action while trying to make our voices heard. The biggest lesson we learned is that our government was there to protect dollars, not citizens. I support the strongest possible Stream Protection Rule. The Office of Surface Mining should regulate mining and the disposal of mining waste with a heavy hand. We have learned from decades of experience that our state agencies cannot be trusted to properly enforce the regulations.
— Jonita Horn, Inez, Ky. 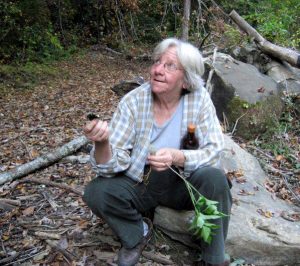 Good healthy forests and watersheds are required for my livelihood as well as the livelihoods of some of the young people in my community who I have mentored as a root-digger and as a non-timber forest products worker. We are sustaining ourselves while living with our natural world, rather than destroying it for short-term gain. Water is where life begins. The Stream Protection Rule should be a way of helping waters be healthy for drinking, watering gardens, fishing, or simply having the ability to play in the water with family and friends.
Carol Judy, Clearfork, Tenn.

I have watched the creek that flows past my grandmother’s home in Floyd County, Ky., become ruined by the strip mining above it. I used to catch crawdads in that creek, but now it smells and looks noxious. There is no life in the water and the terrible odor permeates the entire hollow. Citizens of the coalfields deserve the best possible Stream Protection Rule that the OSM can provide. A strong SPR would greatly improve and protect the quality of life and bodily health of all humans living downstream.
— David Wasilko, Kingston, Tenn.

There’s already been far too much damage done to our streams by the coal mining industry, and without strictly enforced regulation, we can only anticipate more destruction. We need water. We may like coal, and some people are friends of coal, but we need water. These are some of our nation’s headwaters and their pollution goes all the way to the dead zone in the Gulf of Mexico. This is truly a national issue and a national problem.
— Laura Miller, Wise Va. 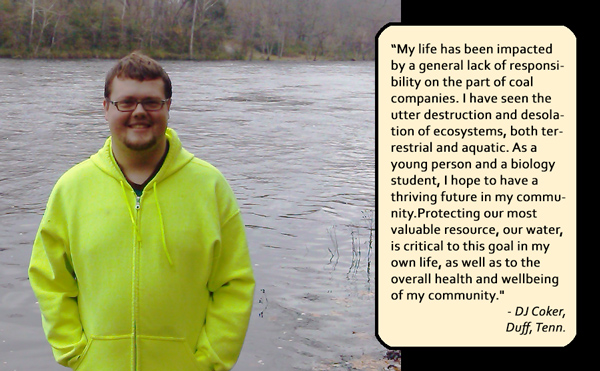 Southwest Virginia is increasingly and now very rapidly realizing that it cannot depend on coal for its economic future. We’ve got to find a diverse number of economic alternatives. One of those alternatives is recreation. In order for our waterways to be this economic resource, they must be protected against the irreversible impacts of mountaintop removal coal mining, valley fills and other associated impacts of the mining industry. — David Rouse, Wise, Va.

My husband and I are lifelong residents of Mingo County, W.Va. Both of our fathers were coal miners, and my husband followed in their footsteps. In the 70’s, the coal company started strip mining above our home. It was very destructive to the community. The water was contaminated and finally went dry. The coal companies need to monitor their impacts to the water more closely. These companies that come out and do water sampling for the mines are not truthful. Please ensure with clear wording in the Stream Protection Rule that citizens are permitted to monitor mining impacts to streams, and that citizens are granted access to coal company and land company properties as needed to do this monitoring. — Donna Branham, Lenore, W.Va. 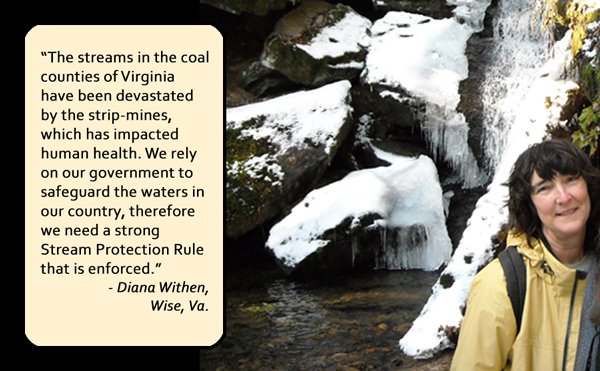