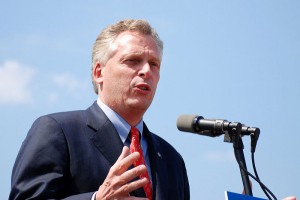 This week, a wide array of Virginia leaders released a letter asking Gov. McAuliffe to reject efforts by Dominion Power that would increase carbon pollution in the Commonwealth. Photo from Wikimedia Commons.

Earlier this week, a wide array of Virginia civic, health, faith, and environmental leaders released a letter asking Governor Terry McAuliffe to reject all efforts by Dominion Virginia Power to push for implementation of historic federal clean power rules in a way that would increase carbon pollution in the Commonwealth.

Leaders representing 50 organizations, including Appalachian Voices, reminded McAuliffe that only he, as governor, is authorized to make the final decision on how to implement the Environmental Protection Agency’s “Clean Power Plan” in Virginia. It is therefore his explicit responsibility to reduce carbon emissions while strengthening Virginia’s economy and helping improve public health. Anything less will support more pollution, which is “fundamentally contrary” to existing U.S. policy and the interests of Virginia residents, the groups write.

“I cannot remember such a diverse range of groups weighing in on a pollution issue in Virginia before,” said Tram Nguyen, co-executive director of the group New Virginia Majority. “This letter calls for action on what we hope will be the governor’s greatest legacy. The governor can adopt a plan that will strengthen our economy while protecting people’s health now and for generations to come.”

The letter states that Virginia should reduce its total carbon pollution from power plants at least 30 percent by 2030, by applying the same standards to both existing and new power plants, and increasing our use of energy efficiency and renewable energy.

But Virginia utilities, led by Dominion CEO Tom Farrell, want a plan that would apply the federal rule only to old, existing power plants – not new fossil fuel power plants. This would allow Dominion to increase carbon pollution for decades more.