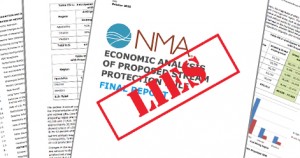 By inflating the importance of some aspects of the coal economy, and outright ignoring others, the NMA has produced a worthless study that’s finding an audience in Congress.

It’s amazing how much work goes into stretching the truth. It’s even more amazing when media outlets and political leaders latch onto that “truth” and peddle it without scrutiny.

A recent and relevant example: an economic impact analysis of the Stream Protection Rule, commissioned by the National Mining Association and written by Ramboll Environ, which is a member of the NMA. In short, the analysis predicts that the Stream Protection Rule will all but deal a lethal blow to the American coal industry. It is 82 pages of the kind of overblown, headline-grabbing hysteria found in modern politics, filled with doomsday scenarios, disingenuous methodologies and misinformation.

The proposed Stream Protection Rule is intended to protect American streams from the worst environmental impacts of mountaintop removal. It represents an update on science and policy that the Office of Surface Mining Reclamation and Enforcement has not addressed since 1983, the year the original Stream Buffer Zone Rule was added to the 1977 Surface Mine Control and Reclamation Act.

The NMA’s analysis of the Stream Protection Rule is grim: between 50 and 95 percent of the nation’s current coal workers will lose their jobs as a direct result of the rule. Its predictions for Appalachia are even grimmer: 30,000 to 52,000 workers, or 60 to 105 percent of the current Appalachian coal workforce, will be cut. 105 percent, that’s truly unbelievable.

According to Jonathan Halpern, a former economist at the World Bank Group and a current professor of energy and infrastructure economics at Georgetown University, the NMA’s projections are seriously flawed. Halpern points out that the NMA relied on unrealistically high coal projections for the 2020-2040 forecast period that do not take into account how factors such as natural gas production, coal seam access and availability, and national policies such as the Clean Power Plan will impact production. Additionally, the study factored in loss of access to coal reserves that are not currently controlled by coal or landholding corporations to project future “losses” in production and employment. As Halpern points out, “[This] inclusion … exaggerates the size of the economic resource base and the consequent ‘loss’ which the study posits.”

In other words, the NMA forecasted a falsely optimistic future for coal, then compared that future to a grim post-Stream Protection Rule future, and projected a doomsday scenario. There is a litany of other problems with the analysis:

Ramboll Environ, the NMA member commissioned to conduct the analysis, chose a curious methodology for estimating the Stream Protection Rule’s impact on future coal production. They sat down with 18 unnamed mining companies and asked them how they thought the Stream Protection Rule would impact their bottom lines. It probably doesn’t have to be pointed out that there is nothing scientific or objective about this approach.

Another serious shortcoming of the report is that it rejects any cost-benefit framework. In other words, this is simply a cost analysis. According to Halpern, we would likely see billions of dollars in benefits in the form of safety and health improvements for communities as a result of the Stream Protection Rule. A 2011 study estimated that the public health burden coal operations put on Appalachian citizens costs around $75 billion every year.”

But the NMA refused to take into account any benefits that the rule could provide.

“We don’t know what it’s worth exactly in dollars,” Halpern told me. “But we know what it’s worth in human terms. People are just as afraid of getting sick, of their crops and livestock withering, of their fisheries drying up and their surroundings being degraded, as they are of possible loss of coal mining jobs.”

As mentioned above, one of the biggest fallacies in the NMA’s report is its assumption that the Stream Protection Rule will be implemented immediately, rather than gradually. But to add to this, the study — or at least the coal executives who were polled for the study — assumes a 100-foot buffer zone around streams. This absolutely isn’t the case, and it’s the reason so many clean water advocates are disappointed with the draft version of the rule. (Such a policy would have completely prohibited all mining activities within 100 feet of streams.)

Perhaps the biggest — and most perplexing — fabrication in this report is its claim that the Stream Protection Rule will replace the 2008 Stream Buffer Zone Rule. It will not. The Bush-era rule was tossed out by a federal judge in early 2014, so its inclusion casts further doubt on the validity of the report.

By inflating the importance of some aspects of the coal economy, and outright ignoring others, the NMA has produced a study predicated entirely on the fear-inducing prospect of job loss that fails to even consider the potential benefits of environmental protection, of clean water, of lowered risks to health. This fact alone tells us where the NMA’s interests really reside; an organization whose mission is to protect coal mining profits, rather than promote the well-being and empowerment of miners, their families and their communities, can really only claim to be concerned with production loss, rather than job loss. It’s incredible and a little sad that the NMA spent 82 pages trying to convince us that it cares about anything else.

Unfortunately, without a strong policy program to replace lost mining jobs — whether that’s in the form of New Deal-like jobs programs, robust federal funding and grassroots initiatives, or something else entirely — studies like this will continue to impact federal legislation.

Without voices pushing back on this narrative in regional and national media, this disingenuousness has the unfortunate effect of holding back progress for coal miners who may face losing their jobs due to a failing industry, rather than presenting them with tangible solutions.