Debt-ridden companies are slashing worker benefits, struggling to clean up pollution — and handing out bonuses. 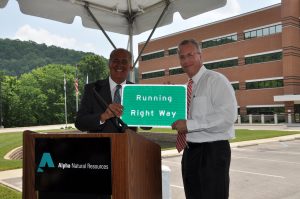 Why would a bankruptcy judge approve a bonus plan for a bankrupt coal company that was “written almost entirely by the executives who hope to exact almost $12 million of profit from it?” Photo of West Virginia Gov. Earl Ray Tomblin and Alpha CEO Kevin Crutchfield via Flickr.

Before we explore that question, I’ll admit, the immoral logic of corporate compensation used to justify gigantic executive bonuses has always mystified me. I’m not highly educated on the matter, nor am I impartial.

Sure, I’d be willing to entertain an answer in the affirmative. But in the case of Alpha Natural Resources, which is swimming in debt and trying to navigate its way out of bankruptcy, it really seems resources could be better spent elsewhere. Paying taxes, for example. Communities in Appalachia could put millions of dollars owed by Alpha to good use.

But, no, they want their bonuses. So let’s hear them out.

Back in December, lawyers for Alpha asked the U.S. bankruptcy court to approve an “Incentive Plan for Certain Key Insider Employees,” a fancy way of saying $12 million for 15 top executives. Their argument is pretty simple — bankruptcy stinks and high-level employees may decide to cut their losses. The obvious solution: make it seem like they’re not losing — at all costs.

According to Alpha’s court filing, bonuses will go to executives “who are vital to the [the company’s] successful restructuring and the maximization of value for the benefit of all parties in interest.” OK, I can sort of see how this becomes logical for a company in bankruptcy.

Alpha has been struggling for years, though, and these bonuses actually exceed the payouts executives received in years past, even as the company barreled toward bankruptcy. The last time Alpha recorded a profit was in 2011. In the past five years, the company’s stock fell from $65 a share to around 35 cents.

Over the same period, it laid off 4,000 employees and shut down dozens of mines, mostly affecting communities in Central Appalachia where the company operates. Just yesterday, Alpha announced plans to close 10 mining complexes and lay off 886 coal miners and other personnel in southern West Virginia.

But in 2015, the year that Alpha declared bankruptcy with billions of dollars in debt, the maximum bonus pool for top staff was $8.4 million, according to the Casper Star-Tribune. If only Alpha’s balance sheet looked like its executives’ bank accounts.

It’s becoming difficult to give Alpha the benefit of the doubt. We don’t even know the names and positions of these supposedly high-performers keeping the company on course. And it looks like we never will.

Alpha’s lawyers argued that disclosing the executives’ identities, salaries and bonuses “may facilitate the hiring” of those executives away from Alpha “by competing businesses and, therefore, increase the likelihood that the Debtors will lose the valuable services of the [executives].”

Now it’s too hard to fake. Witnessing the irresponsibility and one-sidedness of the major coal bankruptcies in Appalachia and their aftershocks goes to show who has a voice and whose voices the system values. 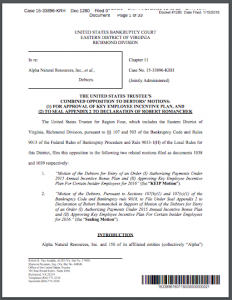 Last year, Patriot Coal — while in its second bankruptcy — hatched a plan to pay a portion of its legal fees with millions of dollars earmarked for workers’ health care. There is growing concern nationwide that bankrupt coal companies, a group that now includes Arch Coal, won’t be able to afford to clean up their mines. And right now, Alpha is trying to revoke medical and life insurance benefits from retired miners and their spouses to save around $3 million a year.

The U.S. Trustee, a watchdog division of the U.S. Department of Justice, summarized the vast disconnect between what is right and what Alpha wants in its objection to the bonuses:

Makes sense so far. Go on …

According to Alpha, these executives need these bonuses as an incentive to do the very jobs they were hired to do, that they are already highly compensated for with generous salaries, and which their fiduciary duties already compel them to do. Such bonuses cannot be justified under the facts and circumstances of this case.

Another common argument is based purely on the merits of the bonuses. How can it be possible that the same handsomely compensated executives who took home bonuses while steering Alpha into bankruptcy get sizable bonuses to help Alpha exit bankruptcy? Well, as lawyers for the United Mine Workers of America argue in their objection, the bonus plan was “written almost entirely by the executives who hope to exact almost $12 million of profit from it.”

Until recently, I never thought of “bankruptcy” and “bonanza” as being synonymous. Maybe rather than being mystified I’m just mad, and I can’t claim anything close to the level of outrage or broken trust thousands of Appalachian families can. But, like U.S. Bankruptcy Judge Kevin Huennekens said last week as he OKed Alpha’s bonus plan, “Cash is king.”