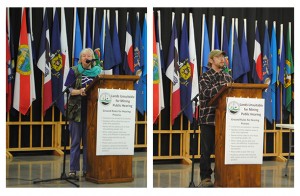 Carol Judy of the Clearfork Community Institute and Willie Dodson, right, of Appalachian Voices speak in support of the Lands Unsuitable For Mining designation at a January hearing in Jacksboro, Tenn.

The Cumberland Mountains in Tennessee are home to diverse habitats and headwater streams that are vital to tourism and safe water, but these have been jeopardized by the threat of coal mining.

The federal government is deciding whether to grant the State of Tennessee’s 2010 request to designate a portion of land in East Tennessee unsuitable for surface coal mining.

Stand up for the Cumberland Mountains! Send your comment to the Office of Surface Mining Reclamation and Enforcement.

In 2010, Tennessee petitioned the U.S. Office of Surface Mining Reclamation and Enforcement to prevent surface coal mining on land within 600 feet of certain ridgelines in a 67,000-acre area. The land is located north of Knoxville in the North Cumberland Wildlife Management Area and the Emory River Tracts Conservation Easement.

The state contended that surface coal mining would not be in accordance with state or local land use plans for the areas, and that mining operations would “significantly damage the natural systems and esthetic, recreational, cultural, and historic values of the ridge lines and their viewsheds that exist within these fragile lands.”

The federal surface mining agency’s draft Environmental Impact Statement released on Dec. 10, 2015, outlined several possible responses to the state petition. The agency’s preferred alternative would designate the requested ridgetop corridors in the 67,000-acre area as unsuitable for coal mining. Appalachian Voices and our allies, including the Tennessee-based grassroots advocacy group Statewide Organizing for Community eMpowerment, support this ban and urge the federal agency to list the area as “fragile lands” to ensure the greatest protection. 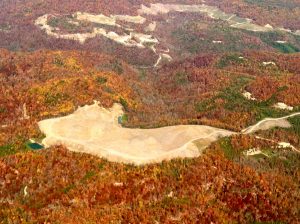 The agency’s preferred alternative would also allow certain areas that were abandoned prior to the Surface Mining Control and Reclamation Act of 1977 to be re-mined, if mining companies acquire the necessary permits. SOCM believes that any re-mining should be strictly limited to areas where it is the only solution to the significant environmental problems at the abandoned sites.

At the hearing in Jacksboro, Tenn., on Jan. 14, Tom Chadwell, a resident of Campbell County who lives beside the petition area on land that has been owned by his family since 1872, voiced his support for the ban. He acknowledged the heritage of mining in both his family and Campbell County. His grandfather and grandmother were both in the mining industry before the stock market crash in 1929, he said, but that was a way for economic growth then and it should not be so now.

“Just because Campbell County is having tough times, and we are, doesn’t mean that we do whatever we can whether it’s right or wrong,” he said. “I do believe tourism is a way to go, we have a beautiful county, a beautiful community and I don’t want to see us [risk] our land that nature has spent most of the last 50 years trying to recover.”

The federal agency’s draft Environmental Impact Statement determined that the areas at stake are “fragile lands” that are ecologically significant and contain fish and wildlife habitat and recreational resources that could be severely damaged by coal mining activities.

A final decision on the proposal will be made after the 45-day public comment period ends on Jan. 25.