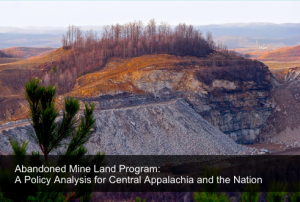 They’re called “abandoned mine lands,” and they’re as dreadful as they sound — huge swaths of land scarred by massive strip mines and left behind by the coal industry almost 40 years ago or more.

They are much more than a blight on the Appalachian landscape. Year after year, these sites discharge toxic compounds like arsenic and selenium, as well as loads of sediment into the creeks and streams that entwine the mountains, posing dangers to residents long after mining has stopped.

The national “Abandoned Mine Lands” (AML) fund was established by Congress in 1977 to collect a per-ton fee of mined coal to help mitigate this pollution and restore these lands. To date, some $5.7 billion has been spent to reclaim more than 800,000 acres of post-mined land, including in Appalachia.

At least twice that much is needed to finish the job. But infusing substantial amounts of money into Appalachia and other regions hard hit by the decline in coal can yield economic and social returns that far outweigh the cost. Data show that AML funds bring jobs to town, revive local economies, and ensure future sustainability of natural resources. For example, in 2013 alone, Central Appalachian states saw a total economic impact of $182 million and 1,317 jobs supported by the AML program.

Yet, just when these communities need it most, Congress is balking at stepping up the distribution of these funds.

A report out yesterday tells the full story and makes several crucial recommendations. Produced by the AML Policies Priorities Group, a joint project of The Alliance for Appalachia and The Appalachian Citizens’ Law Center, the report is based on a participatory research approach that draws input from citizens, scientists, government agencies, academics, community organizers and others.

Among the group’s recommendations:

The report comes not a day too late, as Congress debates budget bills and the Obama administration’s proposed “POWER+ Plan” that would mirror many of the report’s recommendations.