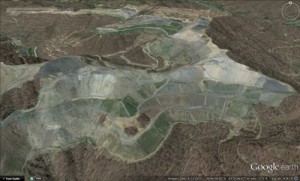 As even some of the largest U.S. coal producers run the risk of caving under their debts, officials that oversee the federal surface mine bonding program are voicing urgent concerns about companies’ ability to pay for post-mine reclamation.

After bankruptcies, legal fees, fines, plummeting share prices and years without a profit in sight, another aspect of the financial perils U.S. coal companies face is coming into full view.

Recently, regulators worried about the ability of coal companies to pay for post-mine reclamation have begun scrutinizing a practice known as “self-bonding,” which allows a company to insure the cost of restoring the land after mining without putting up collateral, provided it meets certain financial criteria.

Reuters reported last week that Peabody Energy, the world’s largest private-sector coal company, is under the microscope and may be violating federal bonding regulations under the 1977 Surface Mine Control and Reclamation Act.

Peabody, which reported a $787 million loss in 2014, had roughly $1.38 billion in clean-up liabilities insured by self-bonding at the end of March, according to the report. In fact, as its finances deteriorate, analysts say Peabody is warping the language of the law and pointing to the relative strength of its subsidiaries’ balance sheets to continue meeting self-bonding requirements.

Peabody is not alone. Arch Coal, which Reuters found has also failed the financial test to meet self-bonding requirements, is restructuring its multibillion-dollar debt. The company ended 2014 with $418 million in cleanup liabilities and hasn’t turned a profit since 2011.

On May 29, Alpha Natural Resources received word from the Wyoming Department of Environmental Quality that it is no longer eligible to self-bond in the state. The company now has less than 90 days to put up $411 million in anticipated mine cleanup costs. The nation’s second-largest producer by sales, Alpha told investors earlier this year that it had $640.5 million in reclamation liabilities at its mines in Appalachia and Wyoming’s Powder River Basin.

Watching as even some of the largest U.S. coal producers run the risk of caving under their debts, officials that oversee the federal bonding program are voicing urgent concerns to state officials.

In April, the U.S. Office of Surface Mining Reclamation and Enforcement sent a letter to West Virginia Department of Environmental Protection urging that the state conduct a fuller analysis of future risks — not just rely on historic data — to calculate reclamation costs.

“Given the precarious financial situation” of companies operating in West Virginia, the letter states, regulators should closely examine the risk of failure for sites with markedly more expensive liabilities such as pollution treatment facilities.

From where we’re standing, it’s tough to see how the situation could improve. Taken together, the country’s four largest coal companies — Peabody, Alpha, Arch Coal and Cloud Peak Energy — have about $2.7 billion in anticipated reclamation costs covered by self bonding. Bloomberg News reported in March that nearly three quarters of Central Appalachian coal is mined at a loss.

As the problem grows, regulators and advocates for reform face their own predicament. Stricter self-bonding standards and enforcement push cash-strapped companies closer to bankruptcy. But inaction could leave taxpayers to pick up the bill if companies with unreclaimed mines eventually crumble.