Appalachian Crayfish: Canaries in a Coal Mine 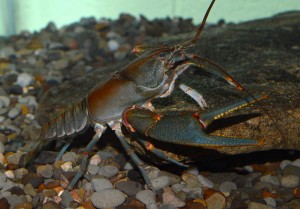 The U.S. Fish and Wildlife Service is proposing that two species native to Appalachia — The Big Sandy crayfish (pictured) and Guyandotte River crayfish — be listed as endangered under federal law after determining the species are in danger of extinction “primarily due to the threats of land-disturbing activities” such as mountaintop removal coal mining. Photo by Zachary Loughman, West Liberty University on Flickr

If you find yourself at a crawfish boil anytime soon, don’t be afraid to go back for seconds. The two species that are sold commercially — red swamp and white river crayfish — are prolific. They can be found in the wild throughout the South and are especially abundant in Louisiana, where they are also farm-raised in ponds.

But here in Appalachia, some of our native crayfish populations are teetering on the brink of extinction, according to a recent report issued by the U.S. Fish and Wildlife Service. Whether or not they are pushed past the point of no return depends largely on the outcome of a recent proposal by the agency to add them to the federal list of endangered species.

Like most creek-dwelling crawdads, the two species in question — the Big Sandy crayfish, which are native to the Big Sandy River basin in Virginia, West Virginia and Kentucky, and the Guyandotte River crayfish, a closely related subspecies found in West Virginia — spend a majority of their lives wedged into the crevices of the creek bottom. These nooks and crannies shelter the crayfish from predators and serve as places to lie dormant during the winter months. But when these rocky creek beds are covered up in sediment, the habitat that these creatures depend on to survive is lost entirely.

This is precisely what is occurring in the Big Sandy and Guyandotte River drainages of West Virginia. The sedimentation has become so severe in recent years that the Guyandotte crayfish population has retreated to the mid-reaches of a single stream, Pinnacle Creek, in Wyoming County.

If the crayfish disappear completely, the ecology of these creeks could change drastically. The freshwater crustaceans are a primary food source for many of the native fish species, including smallmouth bass and trout, which also happen to be the two most sought after sport fish here in Appalachia. Take away the food source and these creeks might eventually be fishless.

The cause of siltation is obvious when you look at where these creeks are located. There are 192 active coal mines in the area, many of which are mountaintop removal mines that are dumping their waste into the headwaters of streams, effectively burying them. And that’s just standard operating procedure. If an accident occurs, a toxic slurry of silt and chemicals spills into the creeks that feed the rivers that run into the reservoirs we drink out of, wreaking havoc on species like crayfish along the way.

The Fish and Wildlife Service specifically mentioned mountaintop removal coal mining in its report on the two crayfish species. The agency determined that, “the Big Sandy crayfish and Guyandotte River crayfish are in danger of extinction, primarily due to the threats of land-disturbing activities that increase erosion and sedimentation, which degrades the stream habitat required by both species,” and that, “an immediate threat to the continued existence of the Guyandotte River crayfish is several active and inactive surface coal mines, including MTR mines, in the mid and upper reaches of the Pinnacle Creek watershed.”

The FWS report also called attention to impaired water-quality — especially hazardous concentrations of sulfate and aluminum — in areas where most of the mines are closed, proving that “the detrimental effects of coal mining often continue long after active mining ceases.”

The proposed endangered species listing could have considerable impacts on the coal mining industry. If the Big Sandy and Guyandotte crayfish are protected under the Endangered Species Act, it would lead to more strictly enforced water quality regulations, which could affect ongoing mining operations in the Big Sandy and Guyandotte River basins as well as coal companies seeking permits to mine in the area.

Dac Collins is a writer, an avid outdoorsman and an advocate for the preservation of our rivers and creeks. He worked with Appalachian Voices as an editorial intern in early 2015.