“MVP” is not a most valued project

{ Editor’s Note } Today’s guest to the Front Porch is Tina Badger, a resident of Elliston, Va. and an intern with Appalachian Voices. With a background ranging from water quality monitoring to feeding the hungry, Tina currently focuses on advocacy work in opposing the proposed Mountain Valley Pipeline. 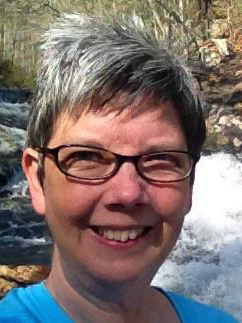 It’s been nearly six months since the companies behind the proposed Mountain Valley Pipeline pre-filed an application with the Federal Energy Regulatory Commission, and residents are still unsure about the routes, full impact, and process.

Landowners and residents on and near the alternative routes released in February are just now learning of possible impacts of the 300-mile Mountain Valley Pipeline if FERC approves the project, proposed by EQT Corp., NextEra Energy and partners under an entity called “MVP LLC.” The 300-mile pipeline, three-and-a-half feet in diameter, would carry natural gas under high pressure from the Marcellus fracking fields, starting in Wetzel County, W.Va., and ending in Pittsylvania County, Va, where it would tie in with another pipeline.

MVP LLC recently held open houses in Monroe County, W.Va. and Craig County, Va., where residents have quickly organized in opposition to the pipeline, joining a line of opposition all along the proposed route. The boards of supervisors in Giles, Craig, Montgomery, and Roanoke counties have all passed resolutions opposing the project, and Roanoke County created a Pipeline Advisory Committee to review the potential benefits and impacts. In W.Va., the Monroe County Board of Health has voiced its opposition as well. 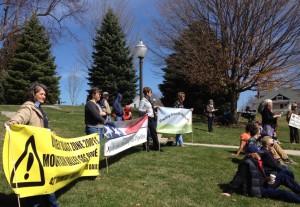 Rally in Blacksburg against the MVP

All counties along the proposed route are preparing for FERC’s upcoming scoping meetings. At this time, there is no definitive date for these meetings.

Meanwhile, surveying continues along the proposed route and has started on the alternative routes, in spite of landowner opposition. EQT Corp. has brought a lawsuit against 103 landowners in West Virginia who have denied the company access to survey their land. Recently, a subcontractor on the project caused a small brush fire in Franklin County, Va., after discarding a cigarette, and residents are reporting survey stakes that are clearly marked “MVP” in areas that are not on the published corridor maps.

Everyone is encouraged to continue to submit comments to FERC and to join one of the many groups that have formed to oppose the Mountain Valley Pipeline.

Now is the time to be involved. Stay up to speed with us and local organizers and take every opportunity to be heard.