Herds of Eastern elk once roamed over a third of the North American continent, where they appeared some 120,000 years ago. From southern Canada to Georgia, and from the Carolinas to the Mississippi River, valleys echoed with the rutting males’ haunting calls. Known as wapiti by the Shawnee and other native tribes, these elk were massive — mature bulls reached 1,000 pounds and stood 50 to 60 inches at the shoulder, with antlers six feet long.

When European colonists arrived in the 1400s, Eastern elk were the most widespread hooved animal on the continent. By 1880, the U.S. Fish and Wildlife Service had officially declared the subspecies extinct. Elk blithely stood by as hunters fired upon them, making them easy targets. Unregulated hunting and forest clear-cutting quickly ravaged the formerly abundant herds. 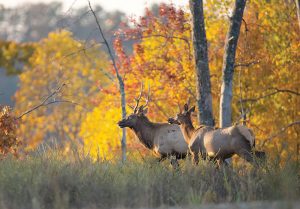 Place names such as Elk River and Elkhorn indicate the historical range of the Eastern elk. One day these places may once again live up to their namesake. Photo by John Brunjes.

Yet today, thousands of visitors come every year to North Carolina’s Cataloochee Valley to witness the autumn rut. Thanks to numerous wildlife agencies and researchers over the past two decades, elk are slowly returning to Appalachia. But the elk who live here now are different from their Eastern predecessors. Of the six elk subspecies that once inhabited North America, four have survived. Two of them — the Rocky Mountain and the Manitoban elk — have been introduced to lands where Eastern elk once roamed.

In Kentucky, a herd of an estimated 10,000 Rocky Mountain elk has flourished. “Our restoration area is 16 counties,” says Gabe Jenkins, deer and elk coordinator for the Kentucky Department of Fish and Wildlife. “About 4.3 million acres, which is equivalent to the size of Yellowstone.”

Though smaller, these Western natives are nonetheless magnificent — Rocky Mountain elk boast the most impressive antlers of any subspecies. Unlike the extinct Eastern elk, which preferred dense woodlands, Rocky Mountain elk “use a lot of grassland — the majority of which is reclaimed mine land,” Jenkins explains. Reintroduced elk respond well to these former mining sites, as herd estimates show. Thinner soils and reduced biodiversity raise concerns as to the long-term resiliency of these areas, however.

Outside of historically strip-mined lands, artificial grasslands are not so widespread, and elk are fewer. The Cataloochee Valley hosts between 150 and 200 Manitoban elk from the prairies of southern Canada. In Tennessee, the population exceeds 400, a number Virginia officials hope to reach by 2018. Elk habitat is limited, however, as most suitable areas have long since been converted to farmland.

Not everyone is happy to see elk returning. Landowners complain of 700-pound elk wandering into their fields and knocking down fences. Some state officials, biologists and hunters also warn of the possible spread of Chronic Wasting Disease, a fatal prion disease that affects North American deer, moose and elk. Identified in 1982 as misfolded, infectious proteins, prions are attributed to many neurological conditions fatal to animals and humans.

Similar to Mad Cow Disease, CWD riddles an elk’s brain with holes so that it appears sponge-like under a microscope. Afflicted elk are “thin, very thin,” and visibly lethargic and disoriented, says North Carolina wildlife biologist Justin McVey. According to him, the disease has yet to be detected in North Carolina. Elk in Kentucky are similarly fortunate. “Our herds are CWD free,” Jenkins says. Infected deer have been reported in Virginia and West Virginia, however, raising concerns about the disease’s possible spread to Virginia’s newly established elk herds.

Despite these challenges, elk restoration remains a priority for wildlife agencies across the region. Though elk have not yet been released in West Virginia, the state’s House of Delegates recently passed a bill establishing a framework for restoration in the near future. With time, elk may once again grace more of Appalachia’s mountains and valleys, their bugling calls echoing throughout.