“Now we can open access to low cost capital for all cost-effective energy efficiency improvements sought by members with sound bill payment history, regardless of income, credit score, or status as renters or home owners.”

With that simple statement, Curtis Wynn, CEO of Roanoke Electric Cooperative (REC) in eastern North Carolina, perfectly summarized the benefit and accessibility that well-structured on-bill energy efficiency financing programs can offer. Wynn’s statement was part of yesterday’s announcement that REC had been approved for one of the first loans provided by the U.S. Department of Agriculture through its Energy Efficiency and Conservation Loan Program.

The $6 million loan from USDA will fund REC’s new Upgrade to $ave on-bill finance program, which was modeled on the Pay-As-You-Save (PAYS) program developed in 1999 by the Energy Efficiency Institute of Vermont. We have written before about other on-bill finance programs that have also used the PAYS model, most notably the How$martKY program developed by the Mountain Association for Community Economic Development. This is also the model that Appalachian Voices is promoting to rural electric cooperatives in the region through our Energy Savings for Appalachia program.

The most important part of Curtis Wynn’s statement is the reference to the fact that the Upgrade to $ave program is available to all of REC’s members who have a demonstrated history of paying their electric bills. It doesn’t matter if the member owns or rents their home, what their credit score is, or what income bracket they fall under. This is a key aspect of on-bill finance programs because it means that financial support is available for the people who need it the most, but cannot pay for the upgrades themselves and may not be qualified to receive a loan from a traditional bank or credit union. And given that REC serves an area with an average poverty rate of more than 28 percent, there is undoubtedly a substantial number of residents that need such support.

One of the greatest things about on-bill finance programs modeled after the PAYS program is that they offer “debt-free financing” for households to pay for improving the efficiency of their home, which results in significant reductions in their energy bills. If the homeowner or renter moves away, they don’t have to pay off any remaining debt, and it doesn’t follow them around. Instead, the “debt” remains with the electric meter, and the next owner or tenant continues the payments through the monthly fee. 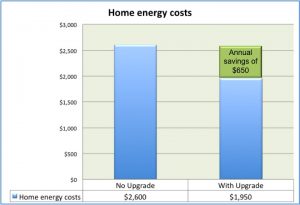 Perhaps the most important aspect of these programs, however, is that the monthly payments made by the member/customer end up being less than the savings achieved as a result of the upgrades! In other words, even though the resident is paying a new fee on their monthly utility bill, their energy costs still go DOWN! That’s the brilliance of REC’s simple title for their program: Upgrade to $ave. And for REC’s part, the way they’ve structured the program allows the cooperative to fully recover their own costs for offering the energy efficiency service, meaning that other customers don’t have to share any of the costs associated with the program. This is a true and elegant example of an “everybody wins” situation.

Based on information provided in REC’s press statement, the cooperative will be able to provide approximately 800 energy efficiency “loans” using the $6 million being guaranteed by USDA. That represents around 6 percent of the cooperative’s total membership, which is pretty outstanding, and this is likely just the first USDA loan that REC will apply for. Further, the savings potential of the Upgrade to $ave program is substantial. With an average savings of 25 percent per home, as much as 4 million kilowatt-hours or more will be saved each year as a result of the program. For an individual households that could amount to around $650 saved each year (of which 75-90 percent would be used to pay the monthly fee).

On-bill finance programs like Upgrade to $ave are a commonsense approach to achieving significant reductions in the amount of energy and natural resources we use; alleviating the impacts of poverty and high energy costs; and, promoting the development of local jobs in communities that need them. The term “commonsense” doesn’t even capture just how much of a no-brainer developing these programs should be for all electric utilities, especially rural electric cooperatives because they serve some of the most disadvantaged and impoverished communities across the United States.

The National Rural Electric Cooperative Association describes “concern for community” as “working for the sustainable development of [the cooperatives’] communities through policies accepted by their members.” On-bill finance programs can go a long way toward contributing to the sustainable development of communities served by electric cooperatives such as REC.

It is notable that, partially as a result of our own efforts, the Tennessee Electric Cooperative Association, in partnership with many of its member cooperatives and the Tennessee Department of Environment and Conservation, is currently in the process of designing its own on-bill finance program and is expected to submit a loan application to USDA in the near future. Appalachian Voices is also promoting on-bill energy efficiency finance programs to electric cooperatives in western North Carolina, and we hope that REC’s example moves some of them toward developing their own program.

Appalachian Voices wholeheartedly applauds Roanoke Electric Cooperative for taking this important step, showing in practice what “concern for community” really means, and for being the first cooperative in the U.S. to receive an EECLP loan for the funding of an on-bill finance program!