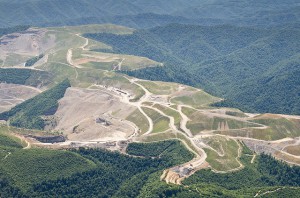 The editorial board of The Washington Post understands that mountaintop removal is still happening, and that the consequences are devastating. Photo by Lynn Willis, courtesy of SouthWings.

Today, the editorial board of The Washington Post published a strongly worded condemnation of mountaintop removal coal mining in Appalachia. The piece begins with what we all know:

“For decades, coal companies have been removing mountain peaks to haul away coal lying just underneath. More recently, scientists and regulators have been developing a clearer understanding of the environmental consequences. They aren’t pretty.”

As evidence, the editorial highlights two recent studies that we’ve also covered here. First, the U.S. Geological Survey’s findings that pollution from mountaintop removal is devastating fish populations in Appalachian streams. We summed up that research on this blog in July:

Over the summer, a U.S. Geological Survey study compared streams near mountaintop removal operations to streams farther away. In what should be “a global hotspot for fish biodiversity,” according to Nathaniel Hitt, one of the authors, the researchers found decimated fish populations, with untold consequences for downstream river systems. The scientists noted changes in stream chemistry: Salts from the disturbed earth appear to have dissolved in the water, which may well have disrupted the food chain.

The second study the editorial points to is new research out of West Virginia University that found dust pollution from mountaintop removal promotes lung cancer. We wrote last week:

The Charleston Gazette reported on a new study finding that dust from mountaintop removal mining appears to contribute to greater risk of lung cancer. West Virginia University researchers took dust samples from several towns near mountaintop removal sites and tested them on lung cells, which changed for the worse. The findings fit into a larger, hazardous picture: People living near these sites experience higher rates of cancer and birth defects.

We’re glad one of the largest newspapers in the country is paying attention, even when many policymakers are not. The editorial does, however, give a bit too much credit to the Obama administration and the U.S. Environmental Protection Agency for their actions to reduce the environmental and human toll of mountaintop removal. Actions have been taken, certainly, but mountaintop removal is still happening in Appalachia.

With the mounting scientific evidence that mining pollution is decimating fish populations, causing air and water pollution, wiping out trees and mountains, and promoting a host of human health problems, there is no excuse for the Obama administration to allow mountaintop removal to continue.

Take a moment to let the president know that Appalachian communities are still being put at risk.