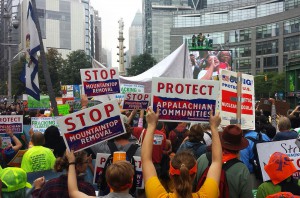 Appalachian Voices has recently been on the road and joining up with many of our partners to stand strong on mountaintop removal coal mining and climate change.

In mid-September, we participated in the Alliance for Appalachia’s two-day Our Water, Our Future rally in Washington, D.C. With dozens of residents from Appalachia and allies from across the country, we engaged in a sit-in and square dance on the front steps of the White House Council on Environmental Quality to pressure the Obama administration to protect Appalachia’s water and future from coal pollution.

Ralliers left a report card on the Obama administration’s work on the environment so far, giving the administration a grade of “incomplete.”
The day before, we met with representatives from federal agencies charged with protecting our water to discuss this “incomplete” grade and urge the administration to fulfill its promises to Appalachian residents.

And on Sept. 20, Appalachian Voices joined 400,000 people in New York City for the largest climate march in history. Appalachian residents joined the front of the four-mile long march along with other communities on the front lines of the climate crisis.

“The People’s Climate March demonstrated that communities are standing together and the immense power of those committed to fighting,” says Kate Rooth, Appalachian Voices’ campaign director. “Perhaps most importantly, it reminded each of us that we are in this together.”