Marching for Science and Climate and Other Shorts

This year on Earth Day, members of our staff joined hundreds of thousands others in Washington, D.C., and at sister sites across the nation to march for science. Appalachian Voices was a sponsor of the D.C. event. 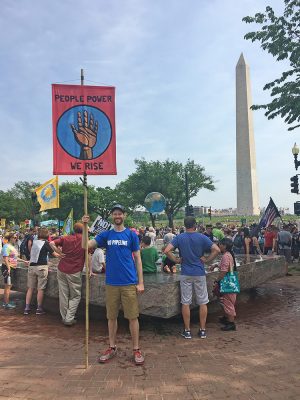 “We all depend on science so fundamentally, for our health and well-being and economic well-being,” says Matt Wasson, our director of programs.

Other members of the team marched in Charlottesville, Va., and in Asheville and Raleigh, N.C.
The following weekend, Appalachian Voices joined more than 300,000 people for the People’s Climate March in Washington, D.C. We helped increase turnout among community members in North Carolina and Virginia through phone banks and by sponsoring buses.

Appalachian Voices released a study on May 3 that demonstrated how an “on-bill” finance program could lower monthly bills for thousands of families in western North Carolina while creating jobs, strengthening local economies, and protecting natural resources and public health.

The report focuses on the French Broad Electric Membership Corp. service area and was prepared by Rory McIlmoil, our energy savings program manager. If the co-op adopted such a program that pays for the upfront cost of home energy improvements for residents of all income levels, regardless of whether they own their home, participants could save $1,000 or more over 10 years, and more than $500 a year after that. Read more at appvoices.org/fbemc-report